CSUN comes away with a victory 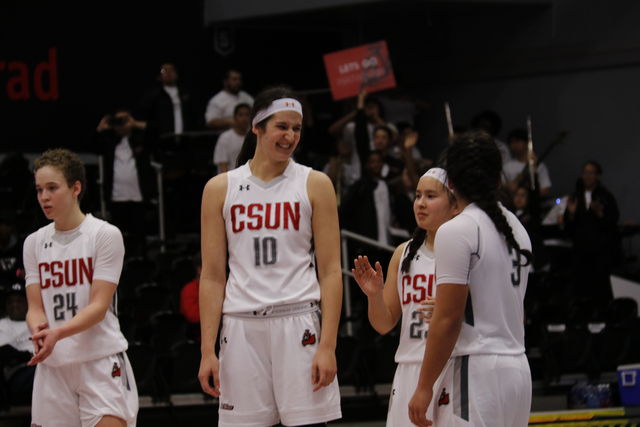 “I was intimidated at the beginning of the season, but I have to give a lot of credit to Channon because going up against her has helped me improve a lot,” said Shymkewicz. (Nate Graham/ The Sundial)

The Matadors were not lacking in energy and their win helped them achieve a four-point lead in the first quarter.

A great pass from Cheyenne Allen, sophomore, to Serafina Maulupe, junior, to close the first quarter with a three-pointer making the score 14-20.

Channon Fluker, a sophomore, had nine points and five rebounds during the first quarter.

It was a quarter filled with good defense and a field goal percentage of 44.4 percent by CSUN.

“We played a lot of freshman last year,” said head coach, Jason Flowers. “They have grown into their roles and with the incoming freshman they have had to do the same. They work hard and perform well.”

Maulupe continued CSUN’s run however with a lay up, which was followed by a three-pointer assisted by Tessa Boagni, a junior, making the score 18-28.

The second half began with Hawaii’s to three failed shooting attempts from the Matadors; by scoring three lay ups taking the lead for the first time tonight 32-30.

CSUN quickly took the lead back with three points from sophomore Claudia Ramos, and a lay up by Allen making the score 32-39.

“My teammates were giving me the open shots,” Ramos said. “All I had to do was make them, but it was my teammates made the positions.”

Then it was a three-pointer made by Salanoa, trying to closing the gap, but Ramos responded with another quick three points making the score 35-42.

Shymkewicz had a career high of nine rebounds tonight and Fluker came away with a double-double. Ramos had a high scoring game with 17 points.

“I was intimidated at the beginning of the season, but I have to give a lot of credit to Channon because going up against her has helped me improve a lot,” Shymkewicz said.

CSUN plays away against the UCSB Gauchos Feb. 9 at 7 p.m.