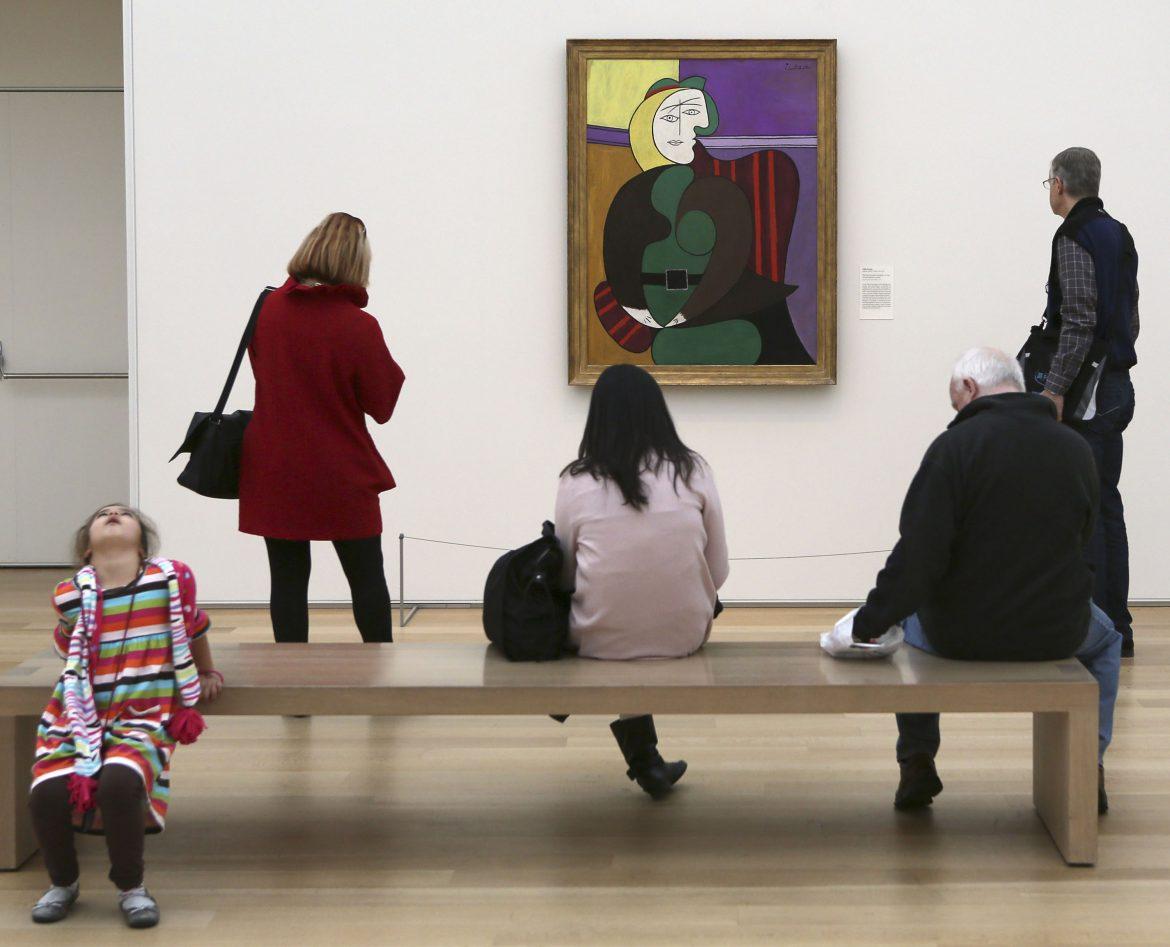 Visitors view Picasso's "Red Armchair" at the Art Institute of Chicago on October 9, 2012, in Chicago, Illinois. The museum has teamed up with Argonne National Laboratory for an in-depth study of the types of paints he used. (Chris Walker/Chicago Tribune/MCT)

I’ve heard the words, “but a child can do it,” uttered many times in museums. It’s the immediate response for many people when they view a work of abstract art, particularly work by Picasso. In fact, the phrase, which usually serves as a criticism against the work of art, has been repeated so many times that it’s become a running joke. But this joke—this seemingly limited point of view—is actually a legitimate aesthetic problem in the art world.

Picasso, who gets the heap of this criticism, partly due to his legendary status as a painter, also acts as the greatest example against this criticism. After all, the same man who is famously criticized for painting like a child is equally famous for having said, “It took me four years to paint like Raphael, but a lifetime to paint like a child.” Picasso acknowledges the aesthetic problem of naturalism versus abstraction, and embraces the side of artists and art-lovers that place more value on “child-like” paintings than realistic, anatomical artwork.

The exhibit of Picasso’s lithographs that are on display in the Norton Simon further exemplify the answer to this aesthetic problem of creating abstract art. The exhibit, called “States of Mind,” is open until Feb. 13th and is free for students. I would suggest for anyone, especially those that question the value of abstract art, to see for themselves the visual expression of what Picasso meant when he said it took him a lifetime to paint like a child.

Within the exhibit, Picasso’s “Bull” serves as arguably the best example. In this series of 11 lithographs, Picasso starts with an image of a realistic and painterly bull. As he progresses, he begins to exaggerate the bull’s size and then goes ahead to divide the bull up by its muscles and natural lines of contour. Work like this could only be done with great consideration to and knowledge of anatomy. From the fourth plate onward, Picasso fully styles and simplifies the bull. Every lithograph has progressively less lines and less paint. Picasso once said that “a picture is a sum of destructions” and sure enough, the final lithograph is the culmination of his abstraction via destruction; it is the minimalistic, simple outline of the bull.

The aesthetic issue that arises out of suspicion that it does not take skill to create abstract art is shot down by Picasso’s work. In abstracting a natural image, like a bull, it takes time and precision to transform the image as we see it into the dilution of planes, lines, colors and shapes that compose it. To create an abstract or cubist painting like Picasso does, the painter must thoroughly understand the elements that make up its naturalistic image. Picasso proves this understanding through his great oeuvre of naturalistic paintings, a clear familiarity in the styles of traditional schools of art. Furthermore, his series of lithographs, like the ones on display in “States of Mind,” truly express his ability to leap from naturalism to abstraction.

So the age-old criticism of “but a child can do it” simply does not hold validity when it comes to a man who sought to not only paint like a child, but displays through his art the skill it takes to do so. There’s no doubt that I will continue hearing “but a child can do it” in Picasso exhibits, but I certainly did not hear it in “States of Mind,” nor would I expect to.