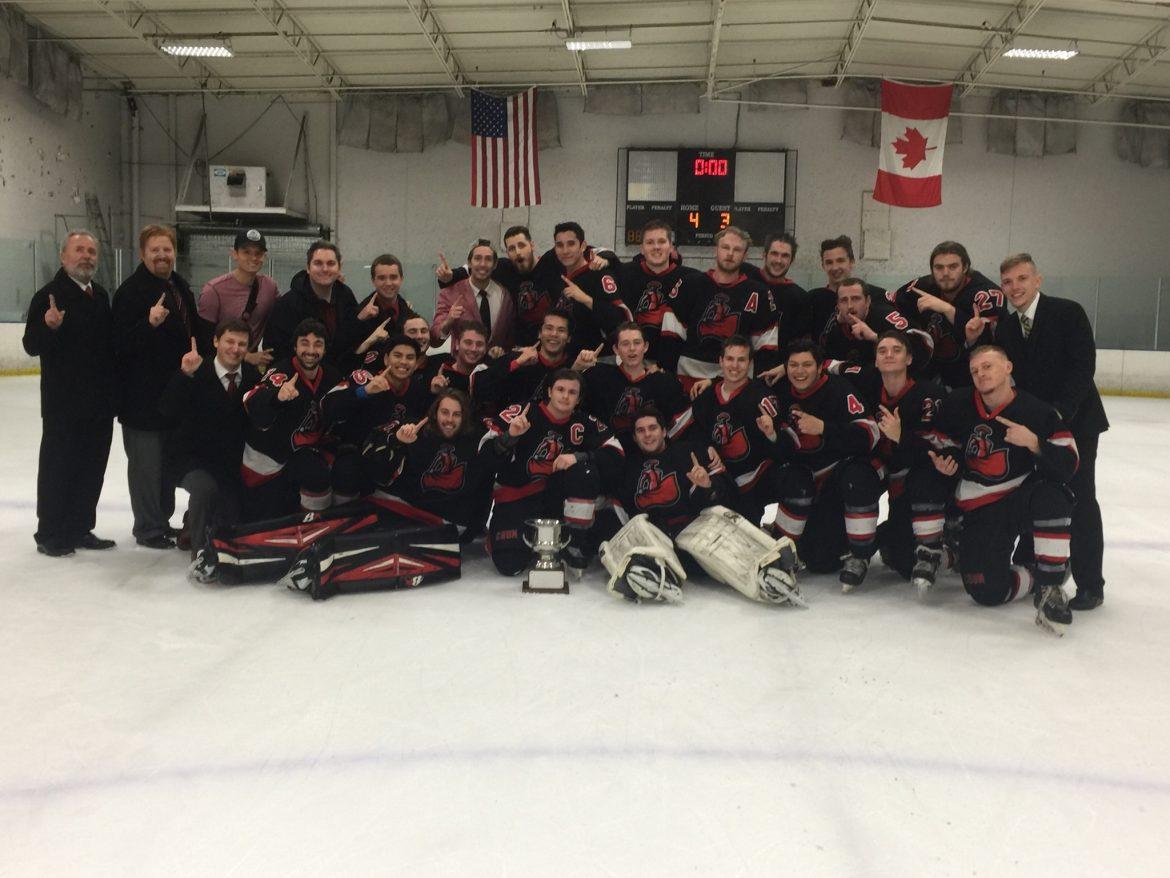 CSUN’s Ice Hockey team claimed the West Coast Hockey Conference title this past weekend by defeating No. 3 Long Beach State, and No. 1 San Diego State in the Championship game.

No. 4 Cal State Fullerton decided to pull out of the tournament prior to the weekends’ festivities, which gave No. 1 San Diego State an automatic bid in the championship game. No. 3 Long Beach St. was the first team to defeat the Matadors this season, 1-0.

The winner would go on to play San Diego State in the championship game and the loser would settle for third place. No. 3 Long Beach State came out firing on the Matadors and scored within the first 27 seconds of the game, giving them a 1-0 lead.

Forward Ellis Bourgoujian put CSUN back into the game minutes later, but Long Beach State quickly scored right back to give them the 2-1 lead.

“Keep going, push through, and keep going,” Bourgoujian said. “The puck just came to me and I just put it in the net. It was right on the door step.”

Drew LaGaly would assist Alex Reints and both teams skated into the first intermission locked at two.

Reints and John Michael Laurin would set up Eli Berengut with CSUN’s next two goals, giving the Matadors the two goal advantage. Reints added a power-play goal in the third, and CSUN would earn a spot with top-seeded San Diego State for the WCHC title.

“You just can’t panic,” said winning goal-tender Brandon Kalvoda. “[Earlier] you wonder if it was going to be one of those nights, but you just have to shake it off. Clearly, I was all right for the rest of the way.”

With the WCHC title and state bragging rights on the line, No. 1 San Diego State and No. 2 Cal State Northridge would need the final period to crown a champion.

The Aztecs would score two goals in the opening ten minutes and the Matadors would need to rely on their leaders if they wanted any shot at the WCHC title.

“We were trying to keep everybody focused and letting them know that it was just a few goals that we needed to shake off, and do what we do well,” said head coach JP Gale.

Early penalties in the game would cost CSUN. After the Aztecs struck for their third goal in the first period, Kalvoda’s night was done. Vincent Sepe replaced Kalvoda with the Matadors trailing 3-1.

“I’m always ready when I am needed, but I knew after the first goal scored on Kalvoda, I knew he wasn’t on top of his game after those first five minutes,” Sepe said.

The Matadors drew two consecutive penalties and CSUN went on a 5 on 3 power-play. Laurin cashed in, and the Matadors were only down by one after the first period.

“It helps to be on the powerplay to get the goal,” Laurin said. “The guys around me helped a lot. Alex [Reints] with the beautiful soft pass assist to me, with Drew [LaGaly] screening the goalie, and I just put it home. I had the easy part.”

CSUN’s Reints and LaGaly battled for the loose puck and snuck it between the Aztec goalie’s five hole. At that moment, the championship was at a stalemate going into the third period at three a piece.

In the middle of the third, LaGaly sent the puck down low for an awaiting Berengut. Berengut slipped the puck past the Aztecs, and the Matadors took the lead for the first time.

“We knew that this was going to be a tough game,” Berengut said. “We picked it up in the second and the third and came out with the W.”

Sepe defended off many chances San Diego State threw at him. Seconds remained on the clock and the Aztecs were desperate to tie the game, but the horn blew and Cal State Northridge was crowned WCHC Champions.

The No. 12 regionally-ranked Matadors travel next weekend to play No. 2 University of Nevada, Las Vegas Rebels in back to back games, hoping to earn a playoff bid at the West Regional Tournament at the end of the mont