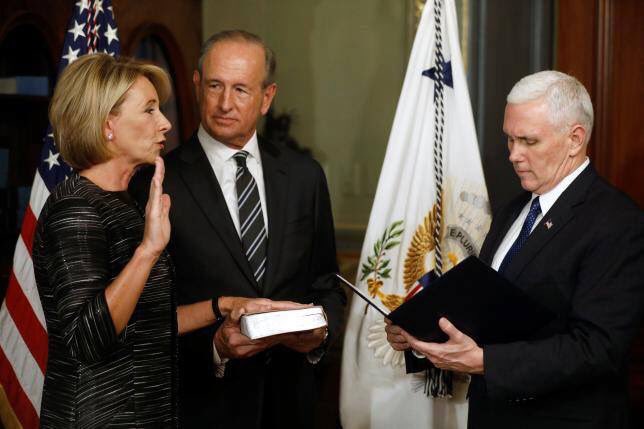 President Trump’s cabinet has added Betsy DeVos to run the Department of Education.

The Senate was deadlocked in voting 50-50. Vice President Pence had the tie-breaking decision, which was also the first time a vice president had to be called upon to make a decision like this. Even with the tie, people are still split on what to think about her.

“If it takes kids away from public education, then it will affect teachers and the hiring of teachers,” said Steve Holle, the professional development coordinator of Michael D. Eisner College of Education.

Holle also said he was in shock about DeVos being chosen because the action could make the education gap grow.

Holle is also worried for his daughter since she is about to enter kindergarten and wonders what could possibly happen in the course of her education. Holle even thinks it is possible that people would turn to religious schools as another form of getting an education.

“Public schools could lose days,” Holle said. “That alone could affect the wages of teachers since attendance is what makes their paycheck.”

According to Holle, this could possibly mean teachers would have to pay out of pocket for supplies or even have to make sacrifices on what is needed in the classroom.

According to the U.S. Department of Education, less than 10 percent of funding for K-12 schools comes from the federal government. As little as that sounds, that small percentage helps get some necessities and help teachers keep their jobs.

According to the New York Times, lawmakers said DeVos was unqualified because of a lack of familiarity with public schools and with laws meant to protect students, despite her passion for helping them.

This opinion comes after Sen. Elizabeth Warren had questioned DeVos about her experience with the public school system which DeVos had answered that she and her family have never attended a public school or a public university.