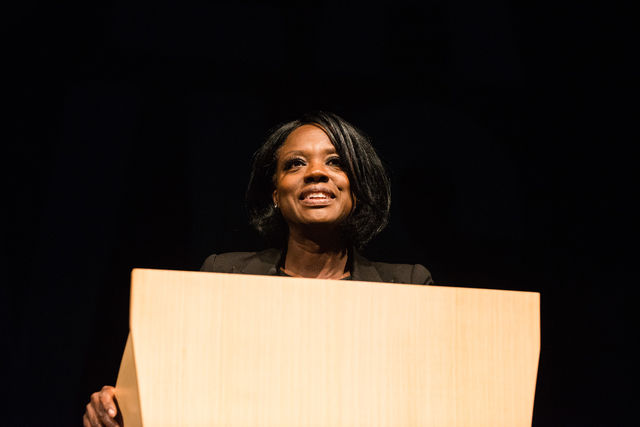 Viola Davis talking to CSUN students at her Big Lecture in the VPAC on Feb. 8, 2017 Photo credit: Alejandro Aranda

Viola Davis is an award-winning actress whose most recent TV and film accomplishments have propelled her onto the Hollywood A-list, but prior to success on the silver screen, her life was not glamorous.

Tuesday night the “How To Get Away With Murder” star spoke at the Valley Performing Arts Center (VPAC), offering encouragement and wisdom by sharing some of the harrowing experiences in her life. During the hour talk, Davis divulged to the showroom lessons she learned from her struggles with poverty, racism and self-doubt.

Davis prefaced her lecture by explaining to the audience the “Hero’s Journey;” the ancient narrative structure in which a hero must leave an ordinary life to conquer some great feat and then return home to pay forward the benefits of their conquest.

Davis’ “Hero’s Journey” began in Central Fields, RI where she was raised in abject poverty and was forced to witness her father abuse her mother. An ordinary life, where she just didn’t fit in is how she described it. In school, Davis was abused by racist schoolmates who would violently harass her with racial epithets on a daily basis.

“Hero’s Journey” has several stages, which can be grouped into three: Departure (otherwise known as call to adventure), Initiation, and Return, or as Davis described it, the “sweet elixir.” Davis shared her “sweet elixir” with the buzzing audience in a personal fashion.

“I went to Juilliard, a four-year program, got out at 28 and crashed. I crashed because I was still running. My feet weren’t moving, but my spirit was moving. Because as much as I was chucking a finger to those eight or nine boys, as much as I was saying F’ you MFer, I believed every word they said. There was nothing in my life that made me believe that I was anything else. Then the big ‘aha’ moment is: the call to adventure isn’t the call to just outward success. The call to adventure is in owning one’s story and understanding that I very much was my mother’s daughter”

“What the caterpillar calls the end of the world, the master calls the butterfly.”

“The first real, powerful thing that happened to me was that I woke up. It’s ugly waking up, by the way.”

On living with your insecurities:

“The turmoil, the feeling like I can’t use me, that I’ve got to be something other than me to catapult my life into a stratosphere of importance, what is it?”

“I’m this, I’m that, my voice is too deep, I walk like Frankenstein, I don’t have a boyfriend. And my therapist listened to it and said, ‘OK, OK! What if all of these things you don’t like about yourself never change, could you live with that?’ And I thought, ‘you know what, you’re getting paid $100 an hour for this shit?’ Then I said, ‘you know what, yeah, I can live with it.’ That’s the sweet elixir. I had it in my hand. It is within reach.”

On being a black woman artist:

“As an African-American woman, our art form is a window into knowing us. Our art form has been so limited that by the time you see a black woman on the screen riding a bus or cussing someone out, or in an apron, by the time they leave the screen, you’re left wondering, who are they? Do they love anyone? Do they have sex? Are they angry? Me living a life bigger than myself is wanting women of color, especially, to be included in the narrative which is Hollywood.”

“At this point during all of these projects that I did, I always felt that, “I have to wear a certain dress or look a certain way on the red carpet so they can see that I can be my kind of cute. I want them to see me, why can’t they just see me? Why do I have to walk like a supermodel to be sexual? Why do I have to be a certain size? There are 350 million people in this country, 51 percent being women. I would say there are a lot of sexual people who are anywhere from a size zero to a size 28.”

“When you come into the theatre, whether you’re looking at it on-screen or on this stage, you are coming to see a part of yourself, to see the universal truth, which is the mess, the vomit, the putridness, the beauty of what it means to be human.”

On accepting your past:

“The treasure of a lifetime, truly, is being who you are. It is the power of owning your story. The failures, the successes, of mom having an eighth grade education, but also of the beauty, of winning contests, of ice cream in the summer. It’s all of it.”

“As Lily Tomlin says, ‘Forgiveness is giving up all hope on a better past.’”

On running the relay race that is life:

“Those of us who want to know a life without pain, without sorrow, without death, are unfit for illumination. That’s life. That sweet elixir is knowing how to live it. Knowing that you have one dash in this world, in this life. It’s a relay race and you have four of the best runners, and your job is to run your leg of the race and pass the baton. So what’s your leg? How hard are you running? What’s the baton you’re passing?”

“Own your story. All of it, because it is what connects you to the world and what is instrumental in you changing it.”

On the value of life experience:

“So here I am, in Hollywood, and no matter what the age, lessons keep presenting themselves in your life until you learn them. Sometimes you learn them fast, and sometimes it takes an entire lifetime.”

“My gift to you is my story, and the more I share it, the more I own it, the more it empowers me. Because when I go to my grave, I don’t want my story to go with me.”