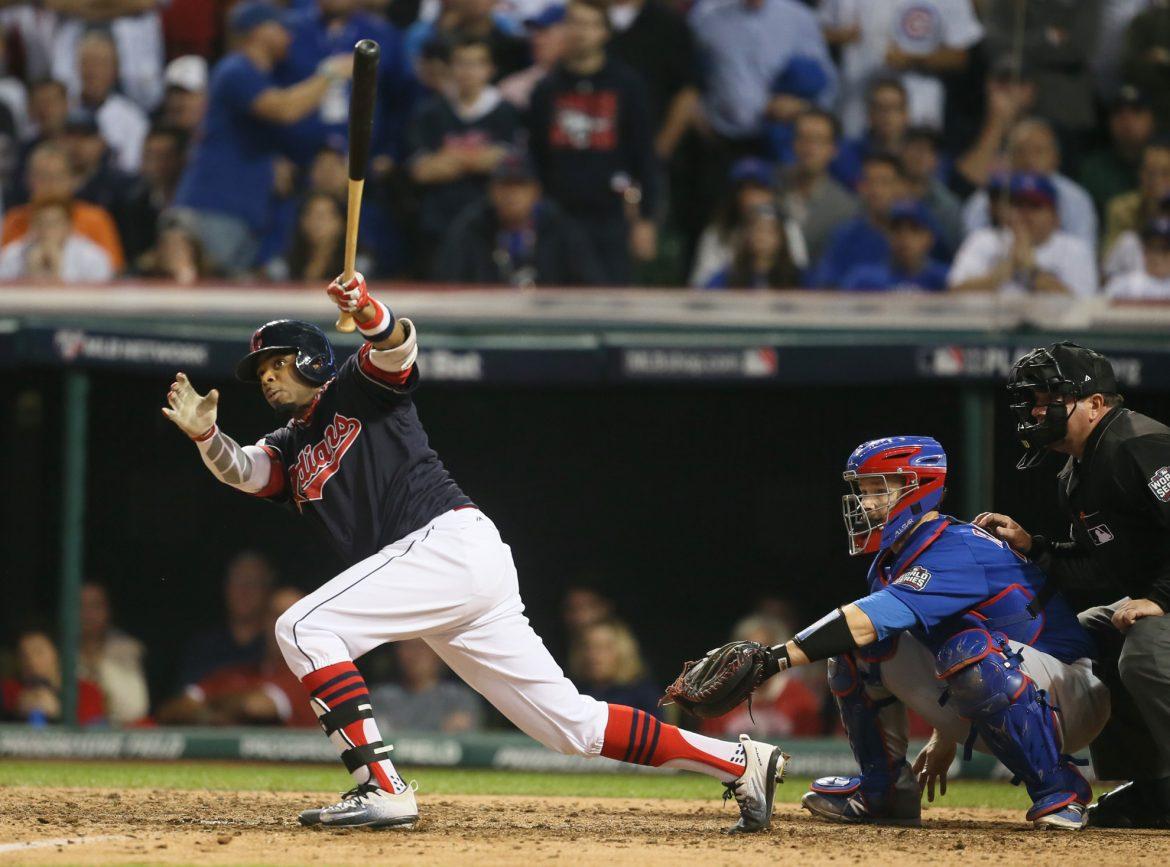 The Cleveland Indians' Rajai Davis hits a two-run home run in the sixth inning against the Chicago Cubs during Game 7 of the World Series at Progressive Field in Cleveland on Wednesday, Nov. 2, 2016. (Phil Masturzo/Akron Beacon Journal/TNS)

Tom Brady and the New England Patriots deserve a lot of credit for their historic comeback in Super Bowl LI, but the Atlanta Falcons’ collapse is perhaps the biggest in history following similar endings in the NBA and MLB finals.

Just like the Golden State Warriors and the Cleveland Indians, the Atlanta Falcons wasted a once-in-a-lifetime opportunity to win a championship.

Despite the seven-game series in baseball and basketball, the NFL awards the Lombardi trophy after one game. The Patriots, led by Brady, scored 25 unanswered points in the second half of Super Bowl LI to force overtime and later beat the Falcons 34-28.

The Patriots’ comeback was unlikely at that point of the game. ESPN reported that the Falcons’ probability to win the game was at 99.7 percent.

The Warriors and the Indians found themselves in a similar situation last year. They had a 3-1 series lead with three games left to play, two of them at home.

No team in the history of NBA has ever come back from such a deficit, yet the Cavaliers came out winners after the Warriors lost three straight games.

In baseball, it has only been accomplished six times in the World Series most recently the Kansas City Royals in 1985. The Cubs not only managed to erase their 108 year championship drought, but they did it down 3-1 in the series.

The Cubs and Indians accomplished in three games what the Falcons did in less than 15 minutes.

Brady is one of the NFL’s greatest quarterbacks to play, but even he would have needed some help from the football Gods. That answer came through in the form of the Falcons’ play calling and their hesitation to run the ball.

Even after the Patriots were down 28-20 at one point in the fourth quarter, Matt Ryan completed a pass to Julio Jones that landed them back in the Patriots’ side of the field. With first down at the 22 yard line, all they needed was a field goal to make it a two-possession game.

The Falcons’ opted to pass the ball on second down and Ryan was sacked when he pulled back to throw. After trying to pass again, the Falcons’ offence was called for a holding penalty. That quickly erased any opportunity for a field goal.

They ended up punting the ball back to the Patriots, giving Brady enough time to mount their own once-in-a-lifetime opportunity. With momentum on their side, they stormed up the field and mounted the impossible task of returning from 25 points down.

Brady and company broke many records after their historic comeback, but the Falcons’ demise cannot be summed up with probabilities or just based on luck. It can be put together after seeing what happened to the Warriors and Indians in 2016.

No matter how big the lead is everything can come crashing and burning down.

What the Falcons’ failed to do in Super Bowl LI will not be the way they want to be remembered by. Their incapacity to put the Patriots away proved to be their worst enemy.

Making history does not require luck, but it helps when the opposition collapses mid-game.

The Cavaliers, Cubs and Patriots made history.
Their feats will be remembered for years to come, but the losses of the Warriors,
Indians and Falcons will forever be haunted by the illusion of a championship. The
only remedy, however, is a title in 2017.