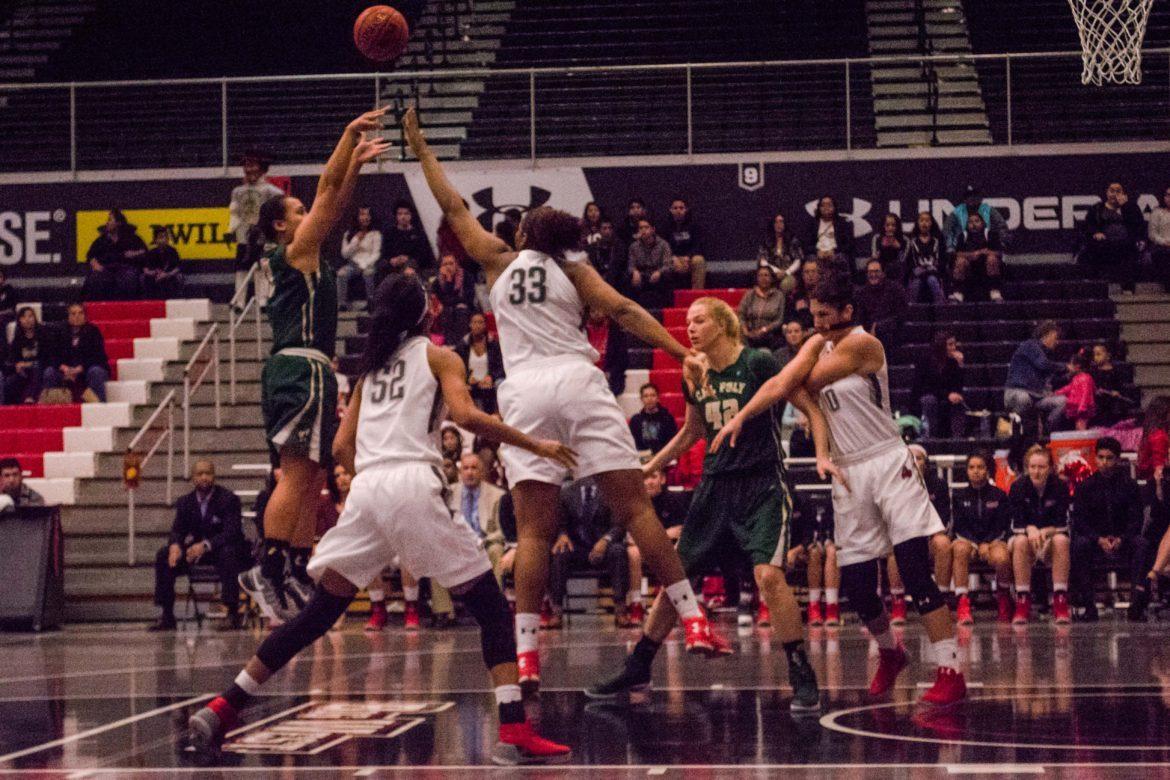 The CSUN women’s basketball team beat the UC Riverside Highlanders in overtime on Saturday night for their fifth straight win.

Despite only shooting 31 percent in the field and going 10-36 from three point range, the Matadors won with a score of 70-67.

The Matadors made only three field goals in the fourth quarter and overtime, but managed to keep UC Riverside to a 30 field goal percentage thanks to their defense and sophomore center Channon Fluker’s 18 rebounds to go along with her 18 points.

The Matadors started the game well controlling the first quarter coming out to a seven point lead thanks to three, three-pointers. UC Riverside answered back in the second quarter with an 8-0 run taking the lead 18-17 with six minutes left in the half.

The Matadors quickly took back the lead when Maulupe hit a three-pointer and hit both her free throws in the next possession. Both teams traded baskets to end the half with the Matadors leading 33-31.

Both teams struggled shooting the ball in the first half with the Matadors only making 36 percent of their field goals, going 5-16 from behind the arc and committing eight turnovers.

However, the Matadors picked it up in the third quarter going in a 14-6 run extending their lead to 10 with four minutes left in the quarter, and finishing up the quarter with a 52-45 lead thanks to their defense holding UC Riverside to a 33 field goal percentage.

UC Riverside got back in the game with a 10-0 run getting them to within a point with five minutes left in the game. Both teams’ struggle with making field goals continued in the fourth quarter, but the Matadors managed to get a three point lead with 11 seconds left until UC Riverside’s Michelle Curry hit a three pointer to tie the game 64-64 and send the game into overtime.

The same story continued in overtime with both teams missing shots, but with the Matadors down by one, Maulupe hit an open three-pointer to put them up by two with two minutes left.

With 13 seconds left in overtime, freshman forward Eliza Matthews came up with a huge block to give the Matadors the victory and put their record to 13-11 overall and 6-4 in the Big West conference.

The Matadors host the UC Irvine Anteaters in the Matadome on Feb.16 at 7 p.m.