Ikea opens doors to biggest store in the U.S 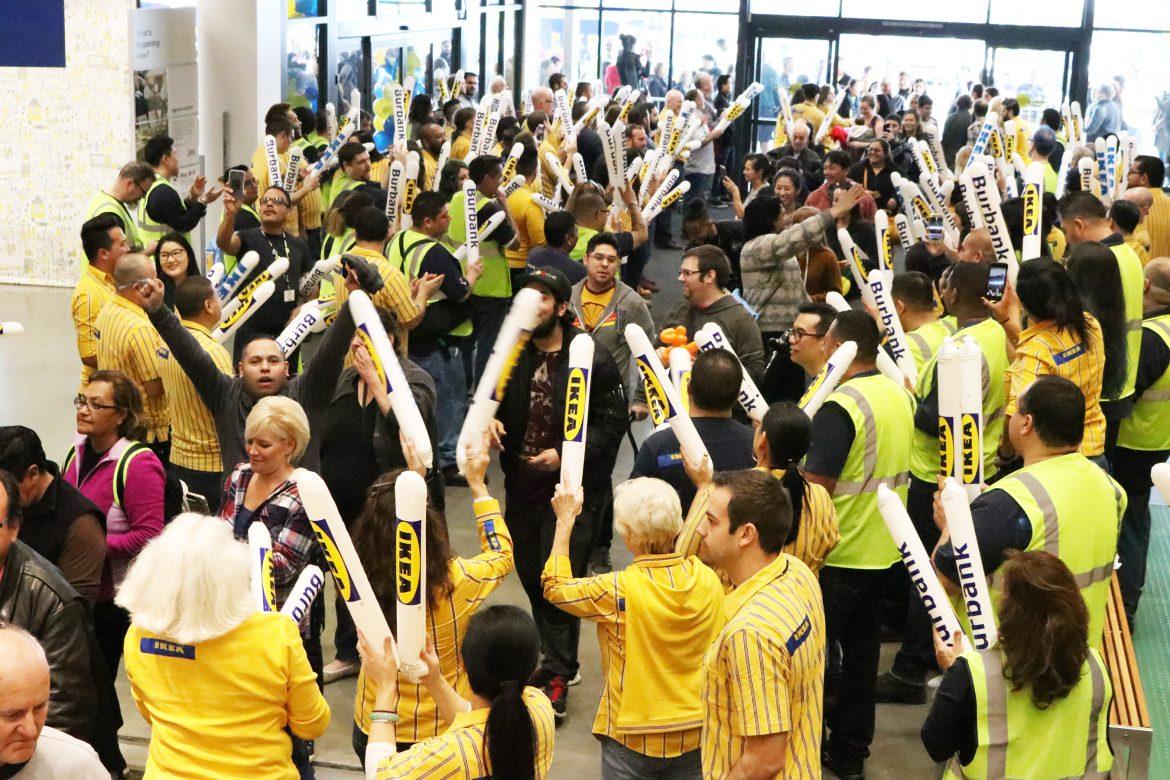 People enter the biggest IKEA store in the United States in Burbank for its grand opening on Wednesday, Feb. 8, 2017. Nikolas Samuels/The Sundial

Hundreds of Los Angeles customers were greeted with entertainment and freebies for the grand opening of an Ikea store in downtown Burbank, which is the largest Ikea store in the U.S.

Despite the rain and the cold morning weather, Ikea Burbank managed to attract a vast crowd to with the promise of free merchandise and gift cards. The company planned many festivities for the eager crowd waiting in line. They were treated to music by a D.J., a face painting booth, glitter tattoos and even jugglers.

Although shoppers were supposed to line up in front of the store by 6 a.m., many arrived earlier and some even waited overnight which called for police to maintain order.

Hollywood couple Lilliana Luxe and John Carrillo waited in line at 3 a.m. for a chance to score some of the free merchandise. They missed out on the sofa, but took home a Poang armchair for their bedroom.

“This is a big improvement,” Luxe said. “It’s so much bigger, so much parking space and easier access right off the freeway.”

Sandy Seufert, a Hollywood resident and CSUN alumni, shares her fiddler skills with the crowd while waiting in line.

“I’ve been studying this tradition and I learned from fiddlers’ from Sweden and Norway, so I was here to share some of that,” Seufert said.

Dressed in Swedish folk costume, Seufert said she was beyond excited to check out the new store as a big Ikea fan.

The original Burbank Ikea was 242 thousand square feet. It opened 26 years ago in Novemeber in 1990. The new store is twice as big and it’s located only a short distance away from the former store. In addition, the new store added 1,700 parking spaces and a 600 seat restaurant.

Before the doors opened, store manager, Jeff O’Shaughnessy, hosted the raising of the U.S, Swedish and California state flags along with performances of the American and Swedish anthems. With the help of Burbank mayor, Jess Talamantes, O’Shaughnessy sawed a log in half, which signifies good luck according to Swedish tradition.

According to a press release from Ikea’s public affairs,

150 new coworkers are joining the store team, the new Ikea Burbank will generate even more annual sales and property tax revenue to the city and local schools.

Joseph Roth, a spokesperson for the company said in an article for the L.A. Daily News that the original store, which has been in the community for over 20 years, was successful and they did not want to change anything.

As part of some of downtown Burbank developments, the previous Ikea location is set to become an apartment complex with retail space.