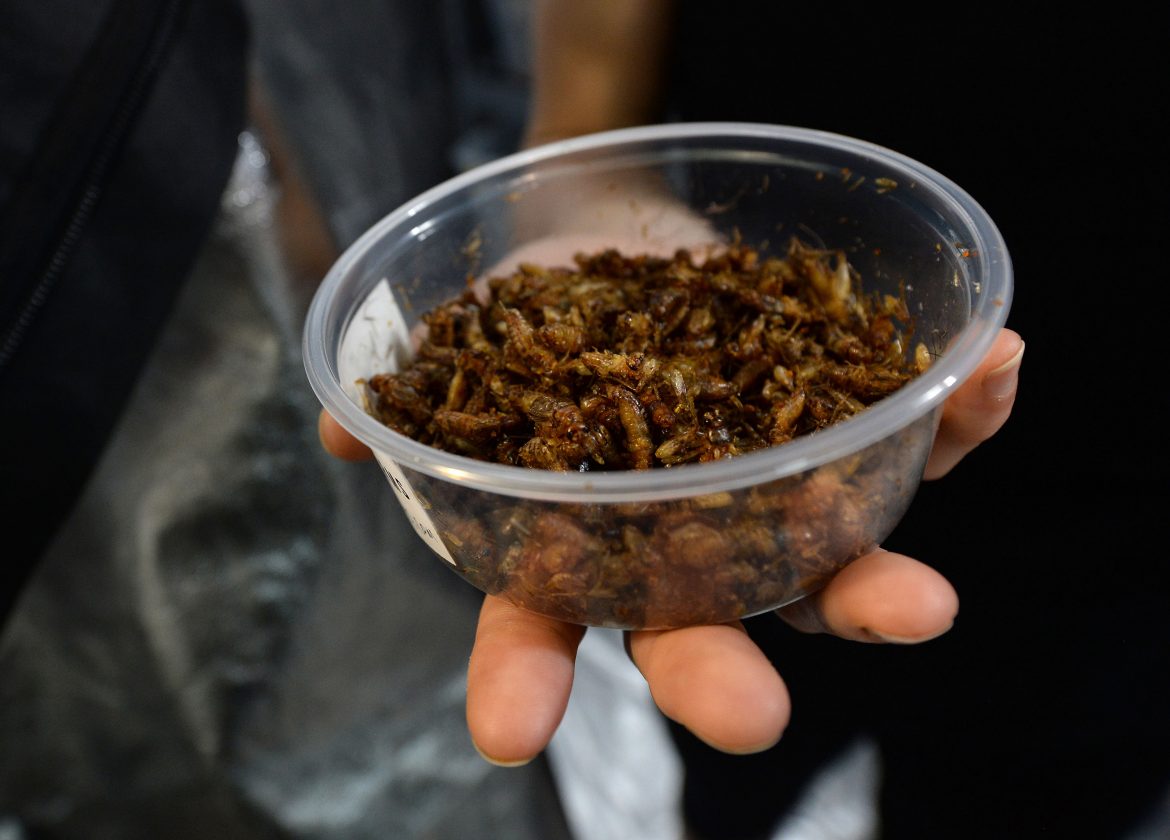 Co-founder Andrew Brentano, of Berkeley, hold a container of roasted crickets at Tiny Farms in Oakland, Calif., on Thursday, Aug. 4, 2016. Tiny Farms breeds and raises crickets, which have become a trendy course of protein. The insects can be roasted and consumed as a snack or ground into "cricket flour" and baked into snacks like cookies or power bars. (Dan Honda/Bay Area News Group/TNS)

Including insects as part of a daily diet may be hard to imagine, but it makes sense if people choose to implement them due to their benefits.

Cricket flour (which is made out of whole crickets that have been dried or roasted and then milled into flour) has been found to include more protein than beef and it is also more efficient to maintain since it requires less food, water, and shelter than what a cattle would need, according to the findings of Dr. Josh Axe–a certified doctor of natural medicine, chiropractor, and clinical nutritionist.

Saaed Yusuf, a freshman majoring in marketing, said that he was very conscious about what he puts in his body. However, since he now lives in the dorms, he tends to go to the marketplace instead.

“There’s those weeks where you eat snacks all week,” Yusuf said.

He stated that he would be willing to eat cricket flour in the future after hearing about the benefits.

Kebioa Seals, a freshman majoring in biology, said that it is hard trying to eat healthy since he came to CSUN, though he still tries by eating health bars, salad, peanut butter and jelly sandwiches, and baked chicken. He also refuses to eat pork.

After informing Seals about the benefits of eating crickets, he agreed that he would try it.

“I would highly suggest cricket flour because I eat crickets myself,” Seals said, “I eat scorpions, tarantulas, everything.”

Ava Morey, a senior majoring in public health, tries to eat healthy by eating salads and sandwiches since they are affordable and easy to make.

Morey does not know if she would be willing to add cricket flour to her diet since she wants to go on a vegetarian diet soon. However, she says that she would consider it since it could be a good substitution for protein once she cuts out animal products.

If interested, Cricketerra offers 100 percent cricket flour on Amazon for $2.49 an ounce.

Some recipes that can be made out of cricket flour include: breakfast biscuits, cinnamon-banana bread, butter cookies with clove sugar, apricot-tarragon cocktail cookies, spiced buttermilk scones, and lemon-poppy seed buttermilk pancakes.