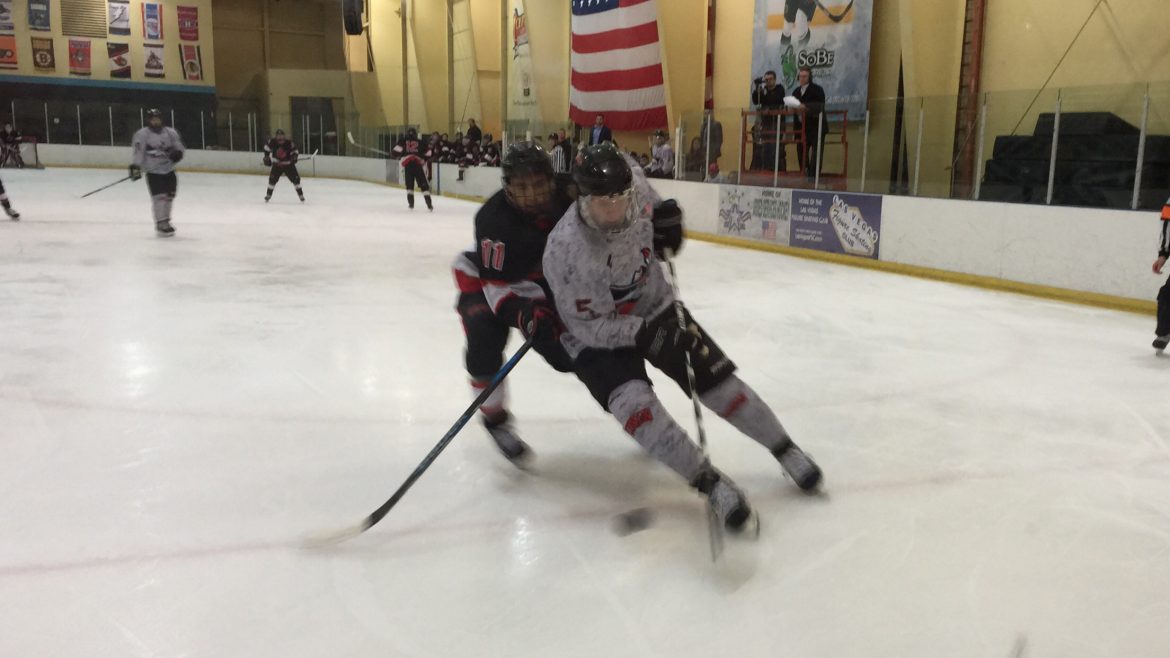 Tommy Pang (11) tries to win the puck away from Niklas Giers (5) down in UNLV’s zone Friday night at the Sobe Arena in Las Vegas. Photo credit: Solomon Ladvienka

The No. 12 Matadors traveled to the University of Nevada, Las Vegas (UNLV) and ran into a road block during back to back games with the No. 2 Rebels.

During their WCHC championship weekend, the Matadors lost two key members to their defense. Both Evan Sharpshair and Mason Yuen were sidelined due to injuries, and UNLV exposed the defense of CSUN quickly in Friday night’s slate. Top face off winner, John Blascoe, joined the team on Saturday because Blascoe wasn’t able to miss class on Friday. The Rebels won nearly every face off against CSUN.

“It just felt like a bunch of kids were sick [or] injured which caused the rest of the boys to kind of give up and accept defeat,” said Isaac Breault. “I think we need to do something to get everybody excited to play again instead of just wanting to get the game over with.”

Changing lines late in the first period, UNLV saw a crease in between the Matadors defense and took advantage giving the Rebels a 2-0 lead going into the first intermission.

During the first period, top goal scorer Berengut took a shot to his ribs which sidelined him all weekend.

CSUN was able to get UNLV in the penalty box multiple times throughout the weekend, but could not cash in.

“Coach said that we needed to stay out of the box, something that we struggled with all season,” said Tommy Pang. “Especially against UNLV, they are going to make us pay. They have a strong power play and most of the time they capitalize on the chances that they get.”

The power play was a crucial weapon to UNLV as they capitalized on the Matadors’ mistakes. CSUN dropped the game to a 5-0 loss.

“Nothing was going well from the drop of the puck,” said Max Goen. “For some reason we were just not connecting with simple passes, breakouts, but the biggest difference is when we don’t win the faceoffs.”

After relieving goaltender Brandon Kalvoda in the WCHC championship game, Vincent Sepe retook the pipes in hopes to split the series with UNLV.

The Rebels managed to score only once in the first period, giving the Matadors hope for the rest of the game.

“Our message to the players was that we needed to refocus and regroup going forward,” said coach JP Gale.

In the second period, the Matadors retook the ice, but saw a one goal deficit start to grow higher. Power play opportunities allowed the Rebels to dominate the game.

“We said in the locker room that we can’t take stupid penalties,” Goen said. “You won’t beat a team with a power play like their’s if you continuously let them go a man up. They are skilled enough as it is, so to give them more than five power plays was a killer to our hopes.”

UNLV scored a total of seven times in the second due to chippy play from both teams. The refs let the clock run for the rest of the game at the midway point of the third as both teams’ aggressions started to show.

“They’re a great program and we can learn a lot from them as a team and an organization,” Gale said. “We want to do the things they do; that’s where we want to be someday.”

Last season, the Matadors defeated Loyola-Marymount University in order to be crowned the first ever L.A. Kings College Cup Champions. The WCHC Champions had defeated UCLA earlier this season twice, 6-2 and 8-2. CSUN defeated Chapman University and Cal State Fullerton to advance to the Championship game.

“The Kings’ Cup is a sure thing and regionals are still possible,” Gale said. “The biggest thing I talked about was learning from our mistakes and the things they [UNLV] did well.”

CSUN looks to defend the title and get back to winning, hoping to hear from the American Collegiate Hockey Association (ACHA) whether they secured a spot in next weekend’s Regional Tournament in Colorado.