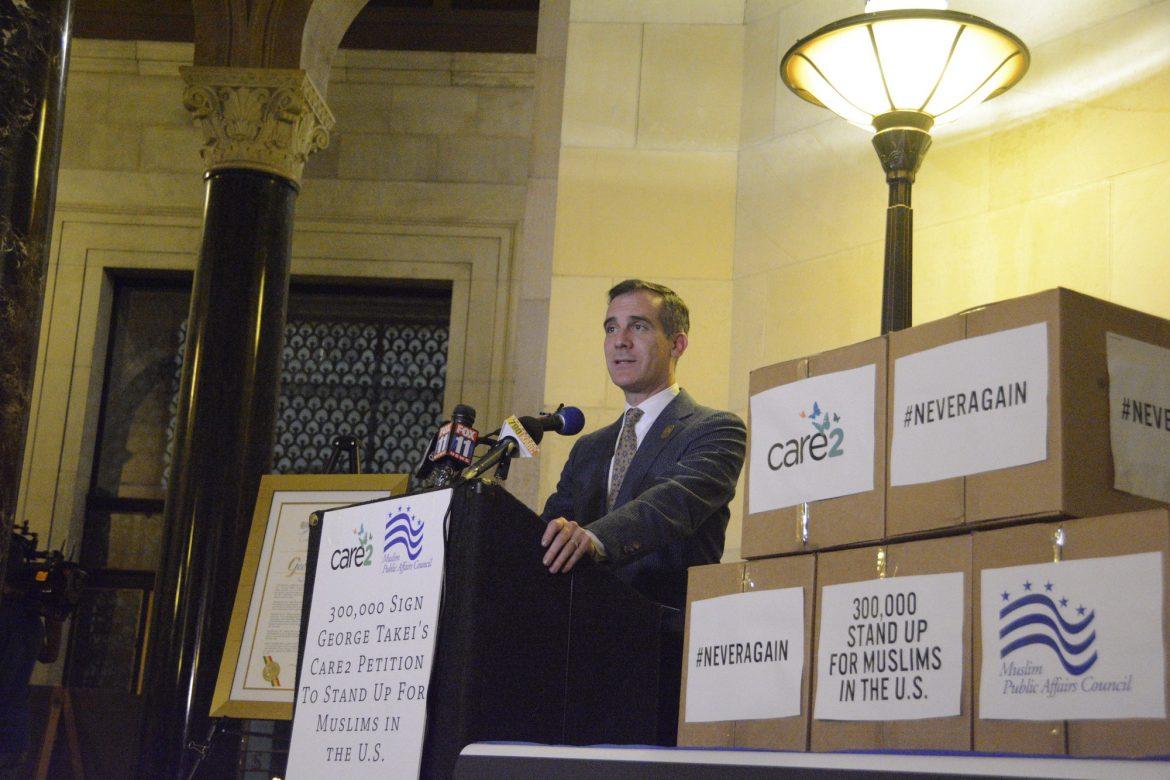 Los Angeles Mayor Eric Garcetti voiced his concern regarding the safety of the Muslim community and supports George Takei's petition in efforts to protect the community. Photo credit: Nathalie Ramirez

Actor and activist George Takei presented his Care2 petition at City Hall on Monday night. Reaching over 300,000 signatures, the petition serves as support for the Muslim community and opposition towards President Trump’s executive order on a potential “Muslim ban.”

Speakers at the podium included several members of the Muslim Public Affairs Council (MPAC), such as President Salam Al-Marayati, who was given the petitions secured in a USB drive by Takei, Los Angeles Mayor Eric Garcetti, actor Mike Farrell and Richard L. Zaldivar, founder and executive director of The Wall Las Memorias Project, also presented at the podium.

“I wouldn’t be here if it were not for my grandfather, an immigrant who became a citizen after enlisting in the military during World War II,” said Garcetti. He shared his family history and related to the significance of community involvement to support immigrants from all walks of life. “Muslims are us, and we are them,” he said.

As a Los Angeles native and Japanese American, who at age 5 was detained in an internment camp, Takei sees a parallel between then and now. “Our vow is to say never again must this happen in the United States,” he said. “The Japanese community stood alone. We will not let this outrage happen again.”

“This is my home. This is my country. This is the land that I know” said actress Hina Khan. Khan also introduced Actor Mike Farrell, best known for his role as Captain B.J. Hunnicutt on the television series M*A*S*H.

“I was raised to believe that citizens are activists and activists are citizens” Farrell said.

Zaldivar raised concern on who will be the next target under Trump’s presidency because he identifies himself as a gay Latino and Catholic. He also took the opportunity to thank Takei for standing in solidarity for the Muslim community.

“In moments of loneliness and fear, it must be difficult, but you turn it into activism. I appreciate that,” Zaldivar stated.

Akifa Khan, a young leaders delegate and former intern for MPAC, explained during an interview the resources provided by MPAC, such as screenwriting workshops, diversity panels and getting young Muslims who aspire to become directors, screenwriters and actors into the Hollywood industry. She mentioned a summit to Capitol Hill, which serves as a purpose to motivate political involvement and show young Muslims what they can do.

After Takei’s speech, Khan said she felt reassured about the support for the Muslim community.

“A lot of women wearing hijab are questioning whether they should wear a hijab outside or not because they’re scared of what might happen to them. But people banning together [against the travel ban]… that is so reassuring and heartwarming, it gives us hope that it won’t happen because everybody is with us,” Khan said.

During the interview, Takei stated that rather than being fearful, he wants to be affirmative.

“We are all American citizens, our democracy is a participatory democracy. The sad thing is that young people think that their vote doesn’t count: every vote counts!” Takei said.

He finished with “my message to young people is to become involved in participatory democracy.”