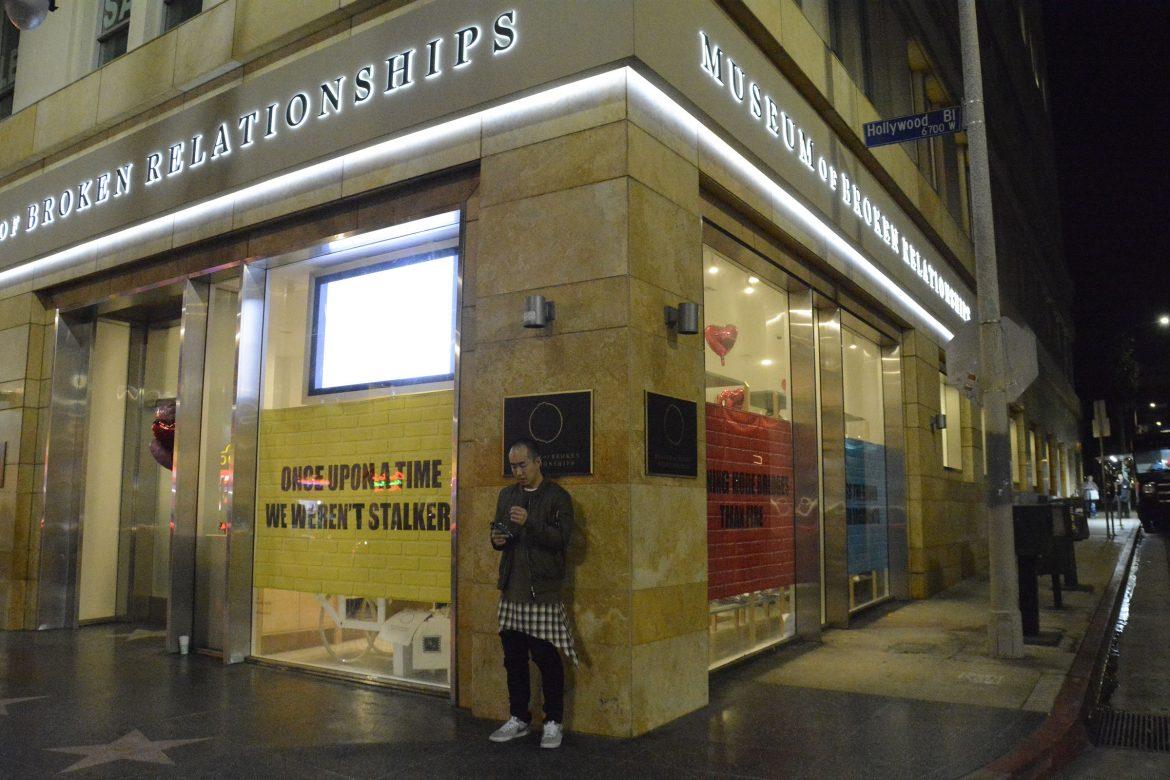 While most couples celebrated with romantic dinners, others chose to attend the Anti-Valentine’s Day party hosted by the Museum of Broken Relationships (MoBR) on Tuesday night.

Attendees had access to all exhibits that displayed donated items, a DJ that played “anti-love anthems,” food and drinks, and a wall where guests offered testimonials of lost love.

Close friends and attendees, Jimmy Martini and Erica Golden, saw the invitation through Facebook. Golden said that the event seemed quirky, weird and fun. Martini expressed that the title of the event caught his attention because he is not a ‘Valentines’ person.

Although she is not in a relationship, Golden said she hopes to find someone who is smart, funny and willing to spend time. She disclosed that she is not a needy person but enjoys spending time with the people she dates.

She also recalled bad relationships. “I don’t like to date guys that play Words With Friends at 4 in the morning, especially if the person sleeps in until 9:30 a.m., then texts me an hour later making broccoli for breakfast.”

Martini expressed his opinion on how the celebration of love should not be reserved only for Valentine’s day. “It’s a specific day for people to do something, but I think you can do that every day,” he said.

Another visitor, Kilian Diep, became interested in the museum through a report from The Young Turks.

“It gives me an excuse to show up, I’m single and it’s Valentine’s Day; it sounded like a good idea,” Diep said. “I was told to mingle but I was more genuinely interested in the exhibits and stories because I’ve had two relationships that ended in heartbreak.”

“Let’s give people something to do if they don’t have a significant other,” said Alexis Hyde, director of MoBR. According to Hyde, tickets sales went up about four weeks ahead of time but sold out within 10 days.

She acknowledged that a lot of people feel really left out on Valentine’s Day and that it’s great they found the museum.

However, the event created a community. Whenever a song like “No Scrubs” by TLC came on, visitors would say ‘That’s my jam!’ and dance everywhere while finding things in common with other guests surrounded by items that represent broken relationships.

“Objects like these and a group of 200 in one room really brings people together,” said Hyde.

Hyde has received interesting donations such as two submissions of belly button lint and two breast implants in the mail which she considered one of their most popular exhibits.

Visitors can get a student discount at the museum.