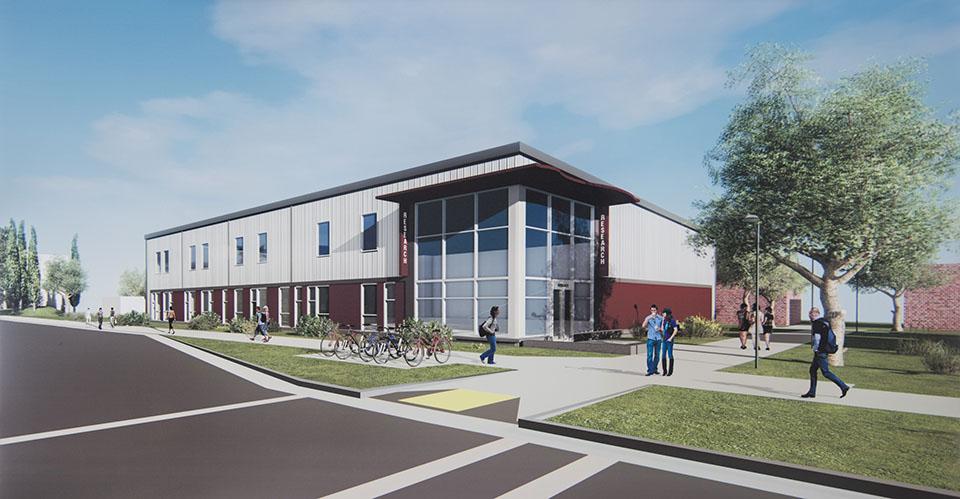 Artist's rendering for the new research building at CSUN, set to be built during Fall 2017.

A new building is being built on Plummer Street next to Sagebrush Hall and it will be the first dedicated to research.

According to Crist Khachikian, associate vice president of Research and Graduate Studies, the building will primarily be for material science and health disparities research.

“Two years ago we did a study across all campus to see how much room we had for instruction, teaching and faculty offices and research. It turned out the biggest gap was for research. We just don’t have any space for research, so we started thinking, how do we create that space?” Khachikian said.

The building will have six or seven offices for faculty, about 10 offices for students and senior researchers, small labs to do research, conference facilities, and research space, said Khachikian.

“It is an exciting new step for CSUN,” Khachikian said. “I think it’s going to house a lot of interesting projects, students are going to have a fantastic space. We don’t have space for 100 students to get in and work together.”

According to Catherine Kniazewycz, director of Design and Construction, the construction cost is approximately $3,022,000. The building is going to be a pre-engineered metal building which is relatively inexpensive, said Kniazewycz.

“The pre-engineered building is going to be a big open space. Conventional buildings have walls and columns that are spaced relatively close to each other. It limits somewhat where your walls are going to go. This building will have a tall roof so there is plenty room inside if for any reason anyone wanted to bring in tall equipment,” Kniazewycz said.

The building was largely fabricated offsite and will have steel columns, beams, and a metal roof.

“It is going to be a very flexible space. They think the research in there will change over time so they want to make sure they can reconfigure the space inexpensively as they need to,” Kniazewycz said.

According to Khachikian, the funding for this building came from many sources.

“Academic affairs usually has a pot of money set aside to renovate labs and facilities. We haven’t been using it so we saved that up,” Khachikian said. “Every time we get a grant and contract the federal government gives us facility and administrative costs. A good chunk of the money comes from there. We have other research partnerships that gives us money to use for facilities.”

In addition, some of the money is coming from the National Institutes of Health grant which is for faculty and students who do research in health and health disparities.

“We are hoping that this will bring a great community of people including students and faculty who will really push some of this research agenda forward,” Khachikian said.