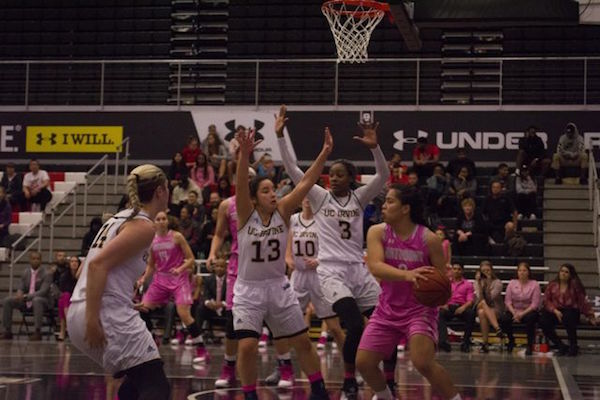 CSUN came away with a victory during their breast cancer awareness match against the UC Irvine Anteaters Thursday night in the Matadome with a 85-77 win.

Junior guard Serafina Maulupe had a career high of over 100 three-pointers, while sophomore center Channon Fluker reached an all-time single season rebound record of 303 and also added another double-double to her accomplishments last night with 27 points.

“It’s a blessing to be able to break a personal record,” Maulupe said. “To hit this milestone means that my hard work is paying off.”

The Anteaters, however, had a 50 field goal percentage while the Matadors only had a 41.3 percent. The match consisted of 40 personal fouls with CSUN taking advantage of their free throws making 72.2 percent of them.

“The fouls played to our advantage because we made a lot of free throws,” said head coach Jason Flowers. “We got to the offensive boards well, but with UCI shooting at 50 percent means we weren’t making the adjustments we needed to.”

CSUN began the game with a 0-5 run, but found themselves having a tough time keeping the rhythm. A few back-to-back turnovers and a foul by Fluker gave the Anteaters a chance to tie it up. UC Irvine’s Brittany Glassow later hit a three-pointer to take the lead 16-14.

CSUN came back in the second quarter with a lay up by Fluker to tie up the game 31-31. Both teams stayed neck and neck the rest of the quarter with CSUN trailing until junior forward Tessa Boagni closed the first half with a rebound tying it up again at 37-37.

Maulupe started and ended the third quarter with two three-pointers giving the lead back to the Matadors 52-63.

“We had to take this game one possession at a time,” Fluker said. “That is exactly what we did.”

In the last quarter, UCI made efforts to catch up to the Matadors with a layup from guard Irene Chavez followed by a three-pointer by guard Andee Ritter, but senior guard Emily Cole responded with a three-pointer and it was not enough for the Anteaters.