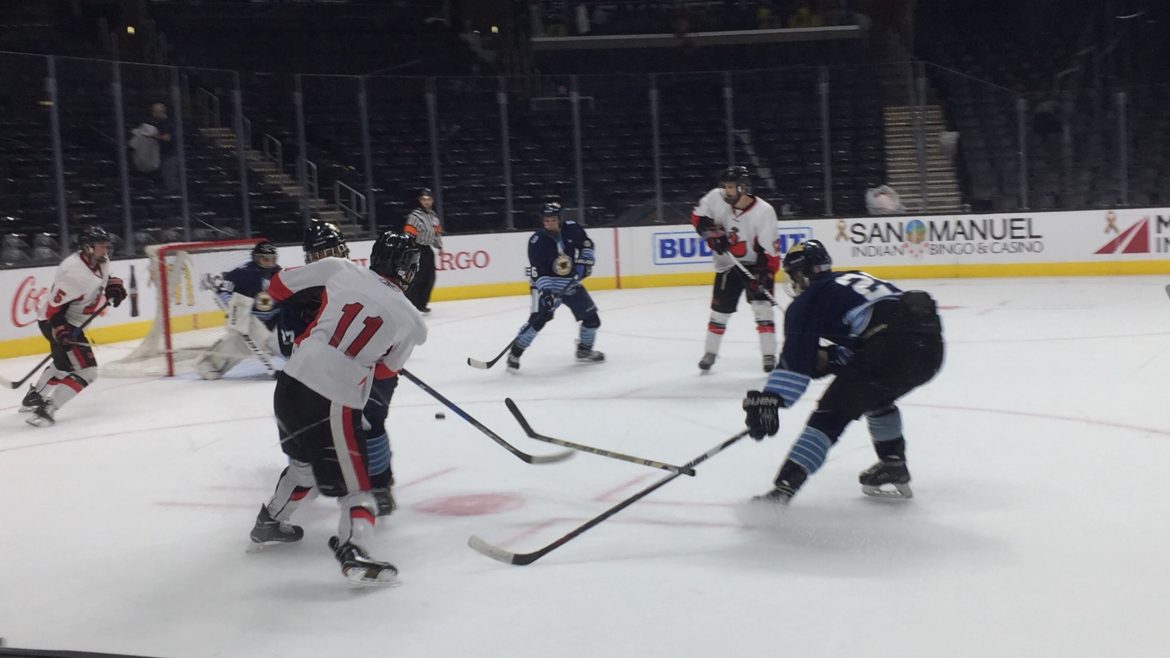 Tommy Pang (11) sends the puck down towards the goalie crease while Evan Wright (12) and Garrett Heftye (5) head to the net for a loose puck Thursday night at the Staples Center in Los Angeles. Photo credit: Solomon Ladvienka

In the first ever Los Angeles Kings College Cup, CSUN was victorious over Loyola Marymount University last season and looked to repeat as champions Thursday night against UCLA.

As defending LA Kings College Cup Champions, CSUN earned a spot in the Championship game at the Staples Center by defeating Chapman University and Cal State Fullerton. The Matadors faced off with Pac-8 Champions UCLA. Earlier in the season CSUN defeated the Bruins two separate times, 6-2 and 8-2.

Prior to the game, CSUN Ice Hockey received news that they will be headed to the West Regional Tournament this weekend as the No.10 seed. Following last weekend’s collapse to University of Nevada, Las Vegas, the Matadors were happy to hear they earned a spot in the tournament.

“We’re going to have a meeting with the players,” Drew LaGaly said. “We need to get our productivity back together, get our heads collectively back into it before our big weekend for regionals.”

Following a tough weekend in Las Vegas, and losing consecutive games for only the second time all season, the Matadors needed to defend their LA Kings College Cup title. Looking to pick up momentum before heading to regionals next weekend.

“I feel like hearing the news for regionals really excited the whole team,” Isaac Breault said. “I hope that the last few games can be a wake-up call for the team and we can get back to playing how we were at the beginning of the season.”

CSUN were without key players in this Championship bout. Though gaining Evan Sharpshair back on defense, Mason Yuen, and Eli Berengut would not be able to compete.

In the second half of the third period, against UNLV, Ellis Bourgoujian, William Lesik, and Levi Bolls all received disqualifications for their parts in the scrum with UNLV players and were suspended for the LA Kings College Cup.

Defending champions CSUN came out aggressive by putting bodies on bodies, and shots towards the net. Neither team committed a penalty in the first period, but UCLA struck in the final minutes of the first and gave them the one goal advantage.

In the second period, CSUN struck back and tied the game.

“I wanted to get us back in the game,” John Michael Laurin said. “It was on the power play, which always helps. A nice pass from Alex [Reints] like always, got us to 1-1.”

Laurin buried the shot from the high slot and the Matadors were right in the game. With both teams seeing their taste for the Kings Cup coming down to the wire, it was time to see which team wanted it more as they both entered the third period with the score still tied.

“We need to stick to our game plan and get the pucks deep,” Sharpshair said. “Bounces don’t go our way and we need to readjust.”

With top goal scorer, Eli Berengut, sidelined with injury, the short-handed Matadors needed to find scoring opportunities and capitalize on shots to the net. CSUN struggled and saw a tied game slip away from them in the middle of the third.

“We weren’t the better team tonight,” Sharpshair said. “We have it in our tanks but with an injured lineup going down the stretch here, we have two more skates before regionals. The dark is before the dawn, so hopefully we can find some depth in the scoring down the line.”

UCLA added another in the third and the Bruins held on for a 3-1 win.

“We didn’t come out as focused as we wanted to be,” LaGaly said. “It was definitely a rough one for us here. We over-estimated ourselves and underestimated UCLA. They’ve been hot these last couple of weeks and they made us pay.”

If the Matadors can defeat Metro State, and continue to win the next two games in the second round and the West Regional Finals, than CSUN will secure a spot at Nationals.

The No. 10 Matadors travel to Greeley, CO for three games that are win-or-go-home this weekend.

CSUN squares off with No. 11 Metro State University, Denver on Thursday and the winner will advance to the second round.