Dreams of being in STEM deferred 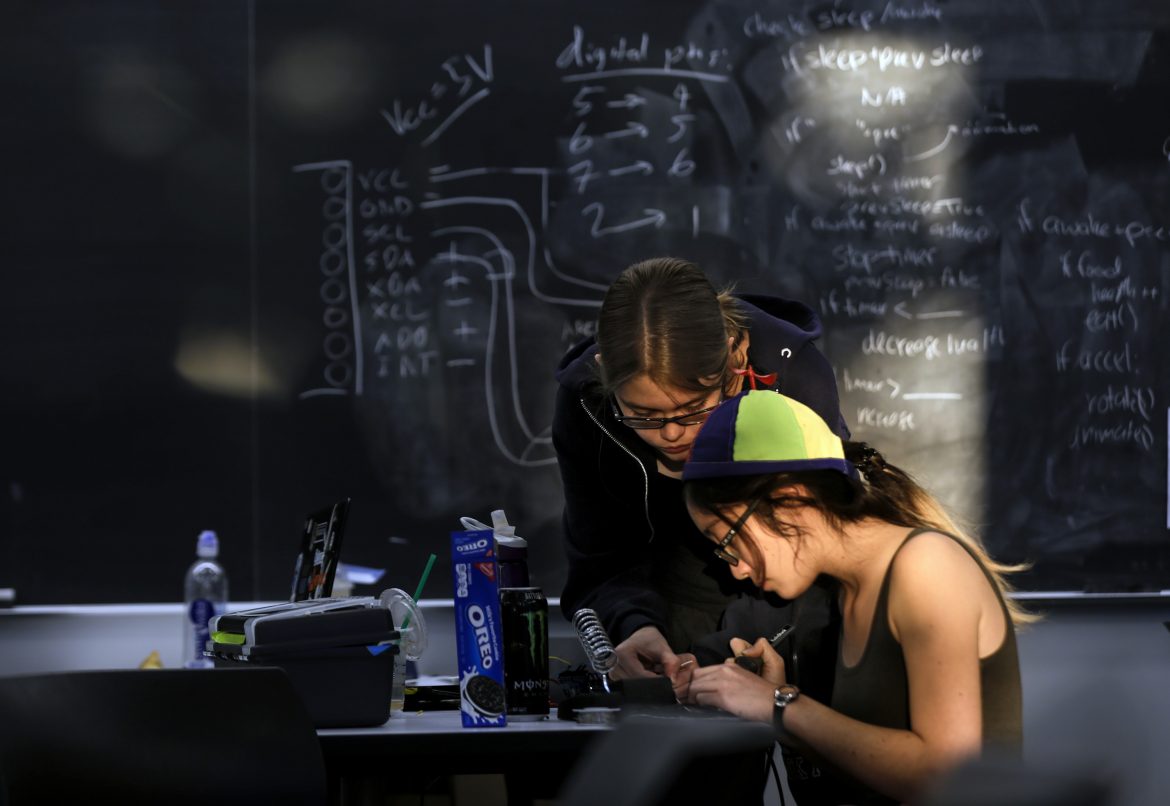 When I was a little girl I wanted to be an astronaut. Even as I’m writing this, I’m sipping on tea from a NASA mug that I got when I was 10 years old and went to a Jet Propulsion Laboratory (JPL) open house. I was convinced I would be a physicist one day in the JPL in Pasadena, and it would be there that I’d make my mark in the history of science as the first to find another “goldilocks” planet like ours. As silly as it was, I even dressed as Sally Ride, the first American woman to go to space, for my school’s “historical figures” day.

When I was younger, I loved studying science and was always advanced and adept in mathematics. I had microscopes, telescopes, and star-charts galore. Granted, I held many ambitious dreams when I was a child. One of those dreams, being a writer, would eventually replace the microscopes and science books on my bookshelf with classic literature and chunky coffee-table art books.

The dream I had as a little girl, of being an astronaut, is forever gone. All that remains is this NASA mug and a small pin of a rover that my teacher once gave me. So, as Langston Hughes famously wrote, “What happens to a dream deferred?”

I remember my dream being deferred in middle school. I had compared myself in academic achievement to the smartest boy in my class. I felt that the chances of being an astronaut or a physicist were so low that if there was even one other person in my class that also shared that same ambition, and they were more competent than I, my dream would never become reality.

As it turns out, the story of my interest and ultimate disinterest in the STEM fields is not uncommon. As St. Rose, a research associate for AAUW, argues, “girls often believe that they have to be exceptional to pursue so-called ‘male fields.” According to Correll’s research, St. Rose found that “among girls and boys with similar math achievement (indicated by test scores and grades), girls are more likely to assess their math abilities lower than boys while at the same time holding themselves to a higher standard.”

Years later, I ran into that “smartest boy in class” again, the same boy who I toxically compared myself to. At the time, I was in high school and determined to be a writer. As fate would have it, this boy, who ended up going to college on an early-track program, who served as the sole reason I gave up my dreams of becoming an astronaut, would never have been my “competition.” He didn’t ever want to be an astronaut. He was going to be a video-game software designer.

In a study done on 100 American colleges with the greatest amount of undergraduates, graduation rates show that men are about 2.5 times more likely to walk away with a degree in a STEM field. Women are underrepresented, making up only 29 percent of the college-educated workforce in STEM fields. However, this is not because of competency. Statistics found by NGCP show that girls display fairly equal levels of achievement with boys in K-12 education, but the gender gap begins to form in college.

St. Rose even goes on to point out that research shows “academically capable women were more likely to leave STEM majors compared to men with similar grades.” Something more than mere lack of interest and toxic comparison may be going on to drive female college students out of STEM fields.

Initially, I thought that surely CSUN, a campus that prides itself in diversity and its programs for equal opportunities, would differ from the rest of this data. To my surprise, in the same study of those 100 colleges, 8th on the list of schools with the lowest proportion of female STEM graduates is CSUN.

As someone who plans to be an educator at the college level, I want to believe that it’s possible to find ways to encourage and inspire participation in a classroom, especially for students who show interest and skill but may lack in confidence. However, I understand that at the end of the day it’s up to the students to decide what career they feel comfortable and capable in pursuing. Furthermore, individual students’ interests may lie in a multitude of studies.

The brilliant thing about CSUN is that it has the resources and community available to give students a general feel for what it would be like to go into the workforce of their major. Faculty receive the privilege to accommodate students into a welcoming workforce where they get to share with eager greenhorns the pleasures one can find in working in that particular field.

I hope to teach literature and art in a way that students feel inspired to continue a path of liberal education, a commonly discouraged path in . Also, as someone who seeks to be a published writer above all else, another field of work that is dominated largely by men, I would encourage women in the classroom to write professionally despite discouraging data.

Though CSUN struggles along with other schools in enrolling and graduating female STEM majors, our school does succeed in offering clear support to women that are STEM majors. The Bonita J. Campbell Endowment for Women in Science and Engineering (WISE) exemplifies CSUN’s progressive mission of propelling dreams forward.

The feelings of fear and incompetency that are inherently attached to being a minority in a classroom or workspace are real and valid. They are not necessarily the only reasons why women are underrepresented in STEM fields, but they can play a large role in widening the gender gap.

At the end of the day, I was the one who ultimately decided to stop pursuing a career in STEM fields. It’s a comfort to know that I’m in another path where I derive an immense amount of pleasure in pursuing, but I still find myself thinking of those little artifacts that still remain of my deferred childhood dream. Confronted with the disparaging data in college campuses, I wonder how many other women I sit with in my literature classes also wished to become astronauts and physicists when they were little girls.