The rise of a visual-based language 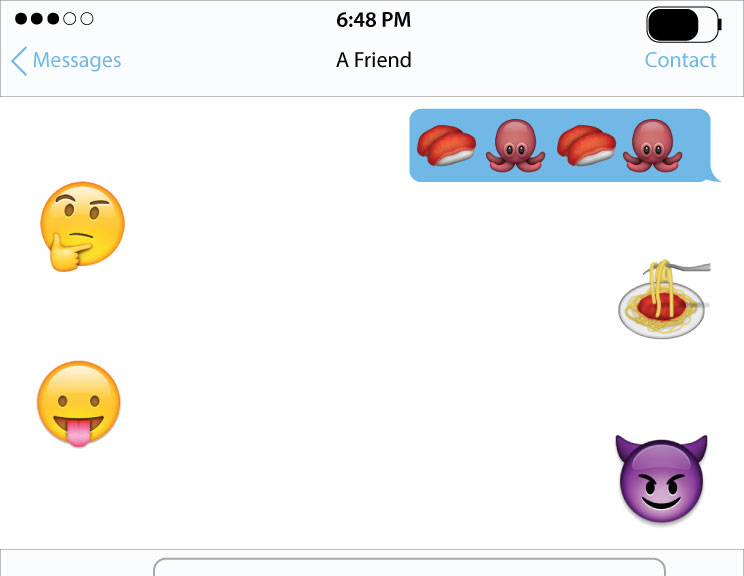 This illustration depicts a conversation between two people trying to choose between eating sushi or Italian food, using emoji. (Kyle Johnson/ The Sundial)

In a digital age with more technology-based communication, one language has been adapted to suit the modern world’s ever-changing means of relaying information.

This language does not contain any letters to form words, but consists solely of symbols called emoji. Through emoji, people are able to convey similar meanings to each other without the use of any words.

People pick up emoji usage by seeing how others are using them and repeat those usages if they can understand and familiarize that meaning, according to Delinah Hurwitz, a part-time psychology lecturer.

Just like words can change over time, the meanings behind emoji can change as well.

“If words are changing, then clearly every kind of communication is going to change according to social influence except for those who choose not to communicate that way,” Hurwitz said.

Communication is changing for shorter attention spans, according to Hurwitz, and emoji are a tool for consuming and responding to information in less time than typing a response.

A common example is using a laughing face instead of typing out how much the message made a person laugh. Additionally, the symbols are used to emphasize certain emotions and tones that are easier to understand compared to plain text itself.

Daeja Thomas, a 19-year-old art major, uses emoji in a straightforward way and for emphasis to what she conveys. While she uses emoji mostly to heighten the meaning of her messages, Thomas said she sometimes sends multiple emoji on their own.

“I think we adapt to what other people do to us,” Thomas said, explaining that she modeled her emoji uses after her friend.

The way people perceive the emoji, however, is where misunderstandings come up. Two people can view the same icon, but have a different interpretation of what the given picture means. This is an issue of peoples’ filters, which vary based on genetics and environment, according to Hurwitz. A lack of text, extension and tone is what contributes to people not understanding what certain emoji mean.

Some emoji, however, have meanings that go beyond the literal image, such as the peach, which is typically used as a butt.

In these instances where certain emoji are given a new meaning, Hurwitz said there is a certain aspect of creativity. Part of the person’s creativity comes with picking emoji and what they mean.

Julie Torres, an 18-year-old business management major, uses emoji to supplement her emotions, while a lack of emoji means she is being serious. One of the main appeals of emoji is the recent addition of skin tones to the human-related icons.

“If I’m trying to use a hand [emoji], I’ll change the color to a bit darker one, so it’s like saying I’m doing it,” Torres said.

The skin tones and more gender-inclusive emoji are a positive addition to this type of language according to Torres since she believes they make people feel better about themselves.

Torres said the lack of skin tone options was not an issue before, but some may feel the addition is actually divisive, rather than inclusive.

For Hurwitz, the skin tones are somewhat of a negative, since the orange-yellow skin tone emoji were more unifying. She said since no one actually has that skin color, it is an implied way of including everyone regardless of their own skin color, while using emoji that reflect a person’s skin tone is considered exclusive towards others.