CSUN students have taken advantage of the gadgets available to them 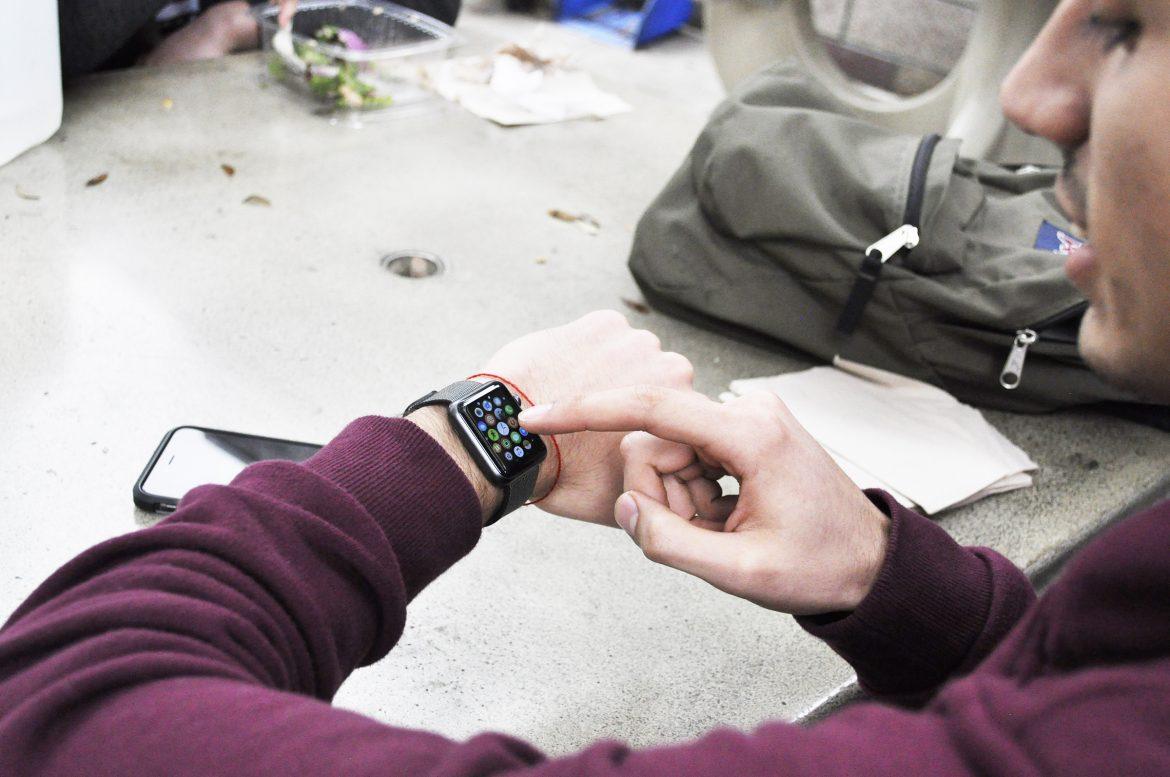 Accounting major, Ori Almany, browses through the apps in his smartwatch at the arbor grill. Photo credit: Ivan Salinas

At CSUN, the two most popular gadgets used on campus among students seem to be laptops and smartphones. Certain technology is also used in CSUN classrooms.

“The classroom technology gives them a modern classroom experience with the same relevant technology students will find in most professional job environments,” said information technology consultant for the college of health and human development, John LaFreniere.

According to LaFreniere, there is a network-connected computer supplied with a DVD player, wireless keyboard and mouse within most classrooms. There is also a projector with speakers connected to the computer and additional connections for laptops and tablets. Wi-Fi is also available throughout most of CSUN’s campus.

“Colleges and departments work hard to keep the technology in the classrooms maintained and up to date,” LaFreniere said. “Fortunately, problems rarely involve a computer or projector that has actually ‘broken down.'”

According to an article from Purdue University, the first portable computer was introduced by IBM in 1981. It weighed 24 pounds and cost $1,795.

Compared to laptops today, which according to laptopmag.com can weigh as little as two-and-a-half pounds and can cost as low as a few hundred dollars, it is much easier to have access to a portable computer.

“It makes it easier for me to have access to any solutions that I may need to find,” said Dimas Corona, a senior majoring in television production.

Corona, who uses his smartphone and laptop on campus, said that the use of technology enhances his chances of finding a job, the quality of homework he turns in, and gives him access to video clips and tutorials.

The first mobile phone was sold by Motorola in 1984 for $3,995 and weighed almost two pounds, according to Mashable. Nicknamed “The Brick” by its creators, the phone was 13 inches long and was considered useless by most due to the popularity of pay phones. The batteries only last 30 minutes.

“You have more access to things,” said Asmaa Salam, a freshman majoring in public health, regarding to the use of technology in the classroom.

While Salam does not use technology very much, she does use it to get reminders and books for school. Along with Corona, Salam uses a laptop and smartphone while on campus.

Yareli Ibarra, an undecided freshman, uses both a smartphone and laptop as well. She uses her phone for social media and her laptop for schoolwork.

“[Laptops] help because when we’re looking at PowerPoint, you could get on your laptop and get slide changes,” Ibarra said.