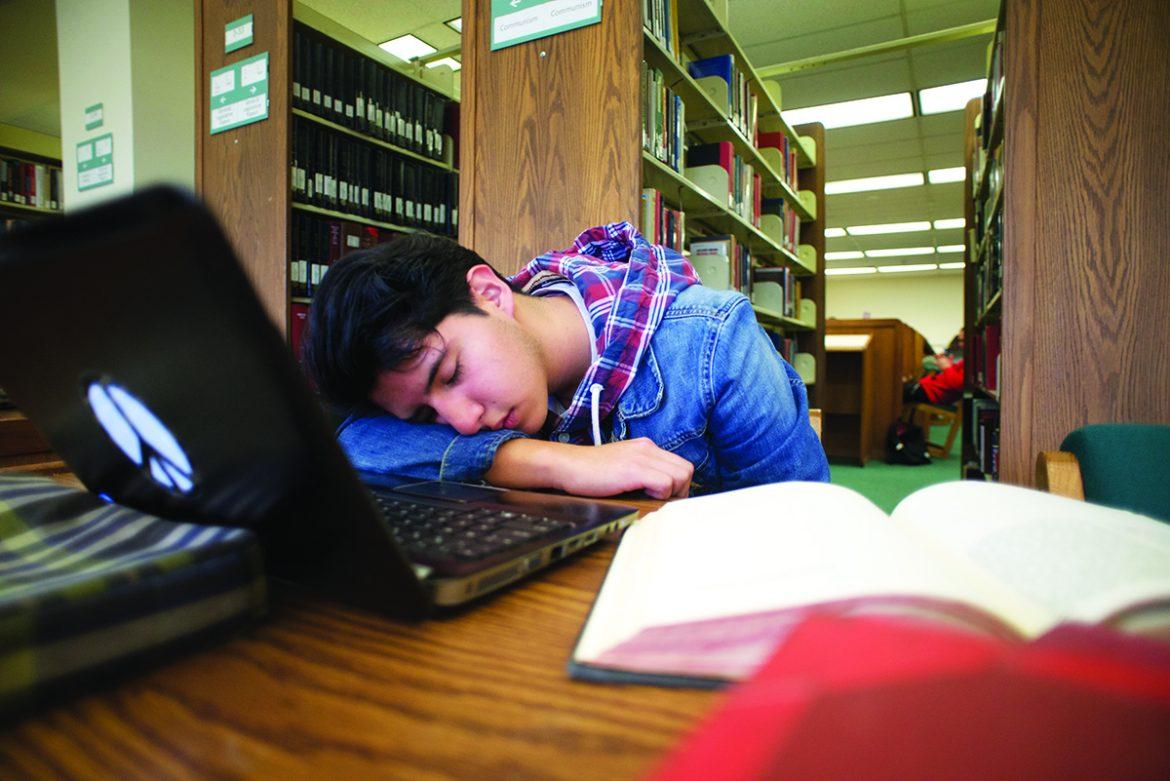 According to one survey done at the Indiana University of Pennsylvania, up to 99 percent of students admit to cramming at least once during their academic career. Photo credit: Alejandro Aranda

Sleep or Cram? This is the question most college students have to ask themselves during midterms and finals week.

While most studies reinforce the importance of getting the suggested amount of sleep to be more successful in college, most students opt for staying up all night studying the day before a big test.

“I do it all the time when I need to write a paper,” said Albert Pineda, criminology major, “I know I am not suppose to stay up all night and should spread my work throughout the week but I still been getting good grades so I see no reason to stop yet.”

Sharon L. Aronoff, health educator for the Klotz Student Health Center, said sleeping difficulties were attributed by students being one of the top three factors affecting their individual academic performance, with stress and anxiety being the other two, according to a survey done at CSUN by the American College Health Association.

According to Aronoff, the survey found that 89 percent of students at CSUN have a problem sleeping during the day and 44 percent felt they did not get enough sleep more than three days in a week.

Students resort to cramming more often during finals week due to important tests or papers and many student turn to study at the Oviatt Library, which stays open until 3 a.m.

When asked if this encourages students to stay up late and cram, Mike Villalobos, a guest service supervisor for the Oviatt Library, said, “there is no real assessment to prove one way or another if library behaviors [are] dictated by library policy.”

The Oviatt used to be open 24 hours during finals week but was recently moved to 3 a.m. because, according to Villalobos, it was a better use of the students’ money to be open until 3 a.m. because not a lot of students were using the library after this time.

Still, Villalobos said students want the Oviatt to be open 24 hours throughout the school year and the reason it isn’t, has to do with the budget.

Juan Isla, a criminology major with a minor in psychology, believes they should keep the hours as is and not shorten them.

“Students have different circumstances and the only time they could go to the library is late at night,” said Isla.

Susan Krikorian, who has a master’s in public health and is a certified health education specialist in the Klotz Student Health Center said good sleep improves memory, alertness, and concentration throughout the day. Getting no sleep does the exact opposite.

Kirkorian oversees the Matadors4Wellness peer health education program which offers a workshop about once a month, called “Sleep Smart,” which teaches tips and techniques that will help you get good quality sleep.

According to Kirkorian, some of the techniques are going to sleep and waking up around the same time, relaxation routines, and mediation.