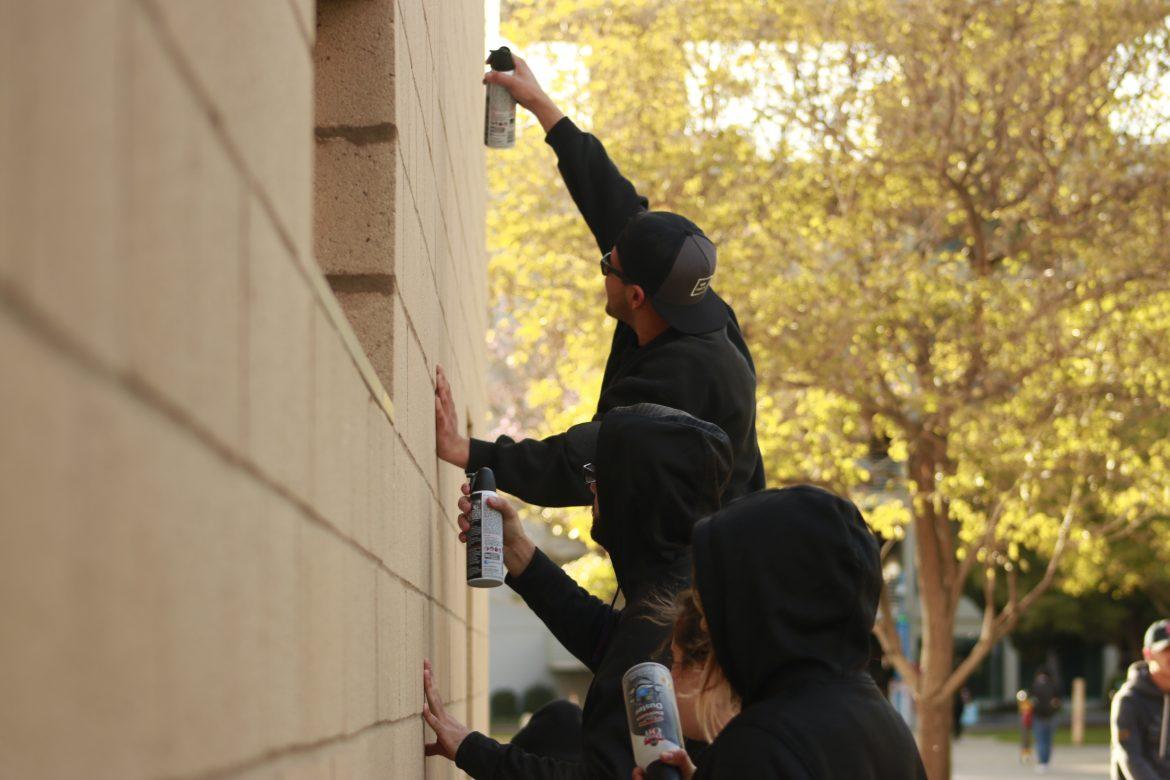 The name of the assignment given to them was called “Living Statues.” Audience members were invited to gather around and interact with the performers.

All students performing in the demonstrations were part of the Communications Department. Groups of four to five students collaborated on each of the six performance pieces that took place throughout the campus.

One performance was on an exterior wall of Manzanita Hall. It consisted of five students using compressed air to clean the wall in a way that emulated spray painting graffiti. The point of the demonstration was to show that protests are not what they are at face value and to not accept protests as what they’re portrayed in the media.

“It goes deeper than that,” participant Adam Jenkala said. “I’m sure people thought we were tagging and thought we were destroying property but in reality we were simply just cleaning.”

Another performance took place in front of Santa Susana Hall and it consisted of students characterizing President Donald Trump, Sean Spicer, Betsy DeVos and Kellyanne Conway. Each student had a can and a few small rocks in front of them.

When a member of the audience placed one of the rocks in each can, the students would churn out canned quotes from each of their characters. Tape was also available for audience use, and one member eventually taped Trump’s mouth shut.

Karla Frausto, who portrayed Betsy DeVos, said the group chose Trump’s admininistration as the topic because of all the controversy that has surrounded it. The group said the demonstration aimed to bring awareness of the cabinet’s corruption.

Inside the Matador Bookstore Complex, another group of students set up a scene to shed light on animal cruelty within the food industry. Three students portrayed two animals and a woman in an apron beating them, while two others offered the audience free burgers. Only two audience members accepted the food while others declined or simply stared.

After the performance, participant Shannon Lawson said the group wanted to show that in order for a burger to look like a finished product, “[it] has to go through a horrific process from an animal [getting killed] to [a] burger.”

Other demonstrations from the class included ones based on male-on-male sexual assault and racial tension throughout our nation’s history.