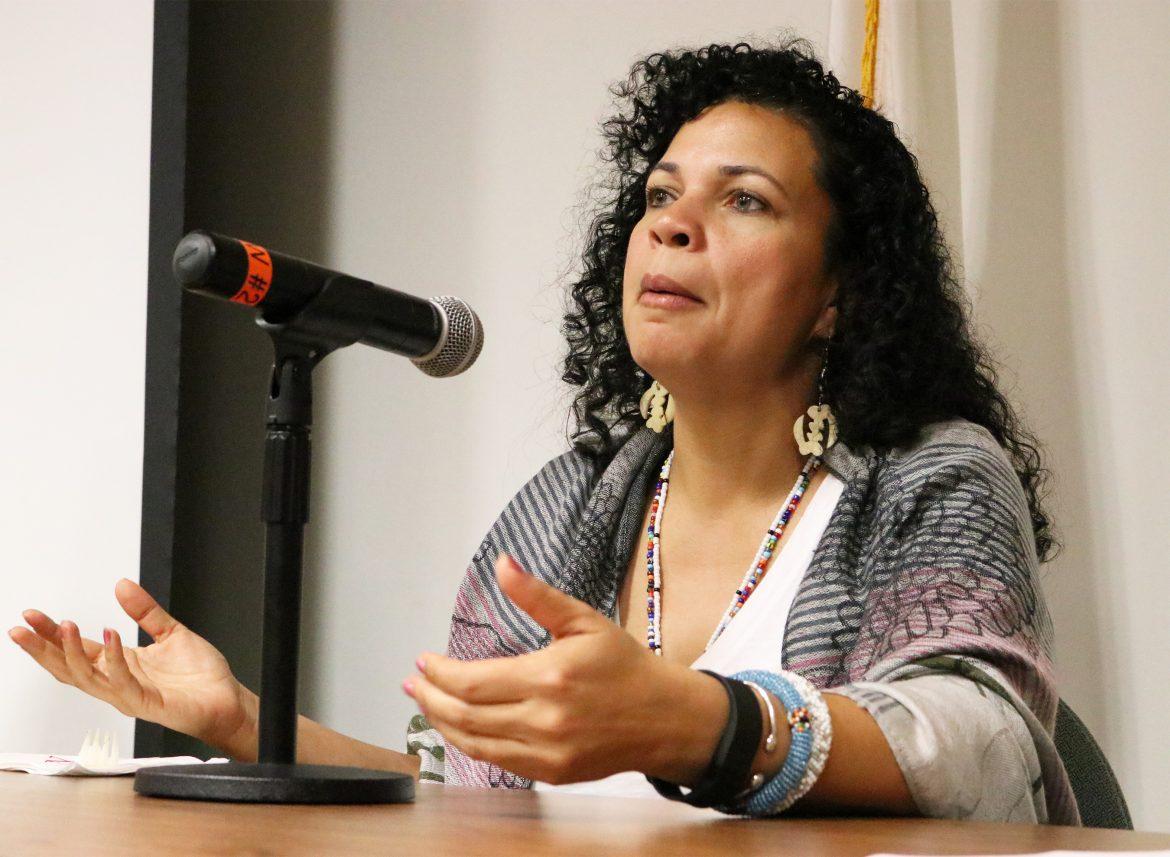 Melina Abdullah, Ph.D, a Black Lives Matter leader and professor at Cal State University Los Angeles, leads a discussion that followed a screening of 13th, a Netflix orginal movie about prejudice in the American prison system, on Wednesday at the Jack and Florence Ferman Presentation Room in Oviatt Library. Photo credit: Nikolas Samuels

“We have to have a conversation about how the system is set up,” she said. “I think it is a very timely conversation to have right now.”

The system is set up to criminalize African Americans and other minorities, according to Abdullah.

Over 100 people were present to receive this message with almost every seat filled in the Jack and Florence Ferman presentation room. Students were even standing in the back and overflowing out the door.

On the agenda was a screening of “13th,” a Netflix original documentary that is nominated to win an Oscar on Sunday, as well as a discussion led by Melina Abdullah, who is a professor of Pan-African studies at Cal State University, Los Angeles.

During the discussion, students asked questions about how to become active in ending the systemic prejudice in America.

The documentary focused on how the American justice and prison system have singled out minorities for years, especially, but not limited to, African-Americans.

Many students in the audience related to the message of being singled out.

Martha Bueno, a 33-year-old graduate student at CSUN, and Latina who is familiar with multiple undocumented persons, said these people are afraid of being targeted by police. “They are afraid, they don’t know what is going to happen to them,” Bueno said.

The screening and discussion was also a learning experience for some students such as 22-year-old biology major Aram Manoukin. He said he did not realize how alive and well prejudice is in America until he saw the documentary.

Abdullah believes Los Angeles is a front for this battle against prejudice as well. For that reason, it is important that CSUN students become engaged around these issues.

“I know folks in the valley think they’re not in Los Angeles but they are,” she said. “LAPD kills more of its residents than any other law enforcement unit in the country.”

The event was a success according to one of the organizers, Melisa Galvan, an assistant professor in the Chicano Studies Department at CSUN.

According to Galvan, the department is considering screening the film again.

“It was a packed house,” she said.