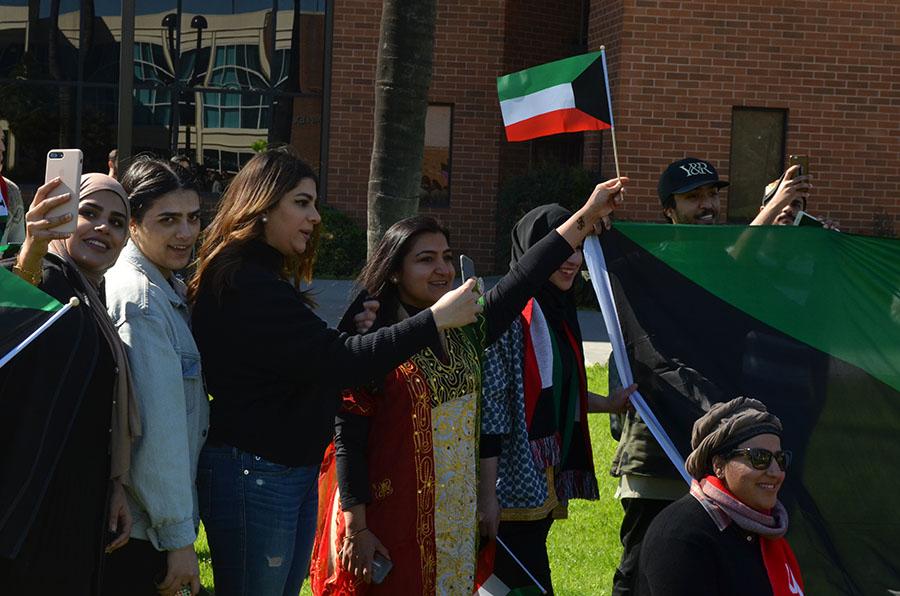 Students sang while the Kuwaiti flag was being held up on the lawn between the Matador Bookstore Complex and Santa Susana Hall on Wednesday, Feb. 23, 2017. They were participating in a Kuwait Liberation Day celebration. Photo credit: Anthony Martinez

Students gathered at the lawn between the Matador Bookstore Complex and Santa Susana Hall earlier today to celebrate the upcoming Kuwait National and Liberation Days on Feb. 25 and 26 respectively.

This was the first year the club had a National and Liberation Day gathering on campus since the it was recently recognized by the university as an official organization according to Ayat Fathalla, vice president of the Kuwait Student Association.

The celebration was a collaboration between the Kuwait Student Association and the religious studies club, according to Zahraa Khuraibet, a 24-year-old civil engineering major.

Since CSUN has a population of over 1,200 Kuwaiti students, the celebration was a gift for the community, especially those who are studying abroad and away from their families, Fathalla said.

“I don’t want them to feel lonely and [that] we can’t do it [celebrate],” she said. “I want them to be happy even [though] they are far away from Kuwait.”

In Kuwait, the two days are typically celebrated with street celebrations involving music and food with the country’s flag and its red, black, green and white colors prominently displayed. On campus, there were tables with coffee, pizza, cake and cupcakes resembling the Kuwaiti flag for students to enjoy.

Additionally, there were activities such as hand painting and writing messages on large pieces of paper to make people physically connect with the meaning of the days, according to Batoul Khuraibet, a 27-year-old environmental science major. The painting consisted of handprints in red, black and green in the shape of the Kuwaiti flag.

For Duaa Shashtari, a 22-year-old marketing major and Nour Abdullah, a 22-year-old civil engineering major, the event was a way for them to feel a sense of togetherness with other Kuwaiti students.

“It’s exciting to show Americans and other nationalities about our culture, or a part of it,” Shashtari said.