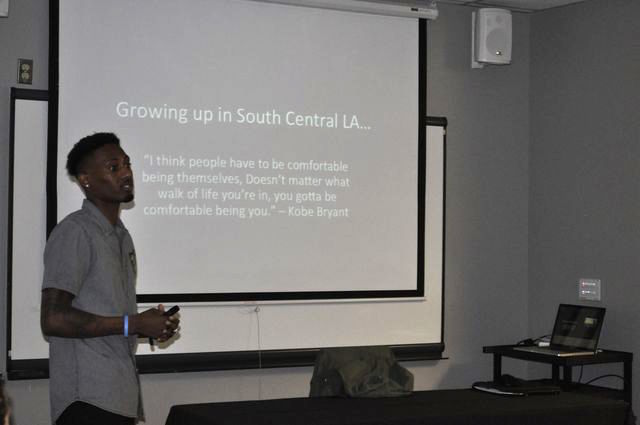 Speaker Terrance Clemens talks to the audience about struggling with his sexuality while playing basketball. Photo credit: Josselyne Rivas

The Africana Studies Department and Pride Center collaborated for Black History Month in order to showcase the intersection of race and sexuality.

“Terrance reached out to the Pride Center and said he was talking at schools,” said Pride Center coordinator Sarina Loeb.

Loeb said Terrance told a compelling story and provided a different voice. “Students can relate to him because he grew up so close to us and went to school over the hill,” she said. “It’s important to touch on the intersections of race, sexuality, and identity.”

Terrence Clemens is a former college basketball star who came out to his entire team while being filmed for the documentary, “Game Face.” The film follows Clemens and MMA fighter Fallon Fox on their journeys as they pursue athletic careers and acceptance.

“How do you tell a team you barely know that “‘Hey I’m gay’?” said Clemens.

During his talk, the star elaborated on his life growing up in South Central Los Angeles and the importance of basketball in his life.

Clemens said he witnessed a lot of negative feelings about being gay within the black community, but the moment he stepped on the court, he could forget about his conflicting sexuality.

“Sexuality was no longer a question when I was on the basketball court,” said Clemens.

Although the film was released over a year ago on Netflix, Clemens is surprised that the momentum and popularity of the film hasn’t died down.

“I get at least one Instagram message a day about someone who has been impacted by the film,” said Clemens. “A godfather of a boy sent me a message and thanked me for first telling my story and told me that the film had stopped his godson from committing suicide.”

Gian Carlo Amarillo, a freshman and biochemistry major, came to the event seeking some perspective about sexuality in the athletic community and the coming out journey.

“I recently had a cousin come out to only my sister and I wanted to understand how she may be still be coming to terms with it,” said Amarillo.

Even though Clemens feels that the film has started a conversation within the LGBQT community, he still hasn’t received a lot of response from the athletic community.

Clemens is continuing to share his story by doing motivational talks and pursuing an overseas basketball career.

“I don’t think that the NBA is ready for an openly gay player like me,” Clemens said.