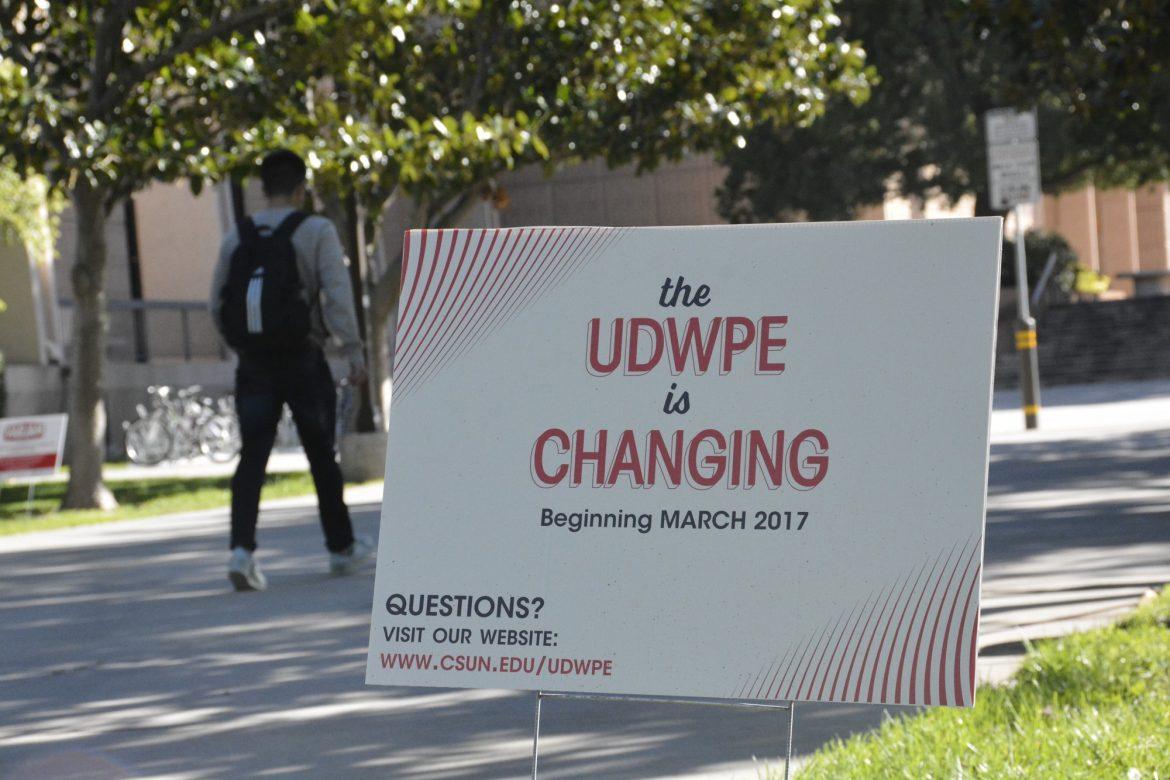 Announcement of the "slight" change for the UDWPE (Upper Division Writing Proficiency Exam) around campus. Students can access to more information on the UDWPE website. Photo credit: Nathalie Ramirez

Students will be introduced to a new format for the Upper Division Writing Proficiency Exam according to the UDWPE website, in March.

The duration of the exam changed from 75 minutes as on the traditional UDWPE to 90 minutes on some topics, and an additional 120 minutes on others for the piloted exams, according to Associate Vice President of undergraduate studies, Dr. Elizabeth T. Adams.

“With additional skills being assessed, six pilots through the Fall term 2016 have been administered,” said Adams.

Written communication will be used to determine whether or not a student has passed the exam. Adams said that student scores on other measurements “will provide data to drive improvements in student learning,” but won’t affect whether they pass or fail the exam.

Twenty years ago the Board of Trustees of the California State University System mandated, by Executive Order 665, a Graduate Writing Assessment Requirement (GWAR) where “every campus was charged with the task of assessing, and verifying, the writing proficiency of all of their students, graduate as well as undergraduate, prior to their graduation,” Adams stated.

The faculty at CSUN developed the UDWPE (a pass/fail writing exam) in response to this mandate.

Back in 2013, the WASC Senior College and University Commission authorized that every campus develop a set of university-wide “core competencies” and assess them at two points in their students’ campus careers—somewhere near entry and somewhere near exit.

The six pilots or tests, of the new UDWPE did not reveal any differences in student scores compared to the traditional UDWPE, according to Adams.

Since the UDWPE already served as an evaluation on measuring a student’s writing and critical thinking skills, Adams said the readings, prompts, and scoring guides for the exam needed “only slight modifications in order to convert the UDWPE into an assessment instrument capable of assessing four of the five core competencies—with oral communication being left out due to the unsuitability of using a written exam to measure a vocal skill.”

The university began to explore the possibility of using the existing UDWPE as an “enhanced” assessment instrument in the academic year 2014-15. The full transition is occurring now only after the six pilots of the “assessment-enhanced” UDWPE were overlooked to make sure that the new format would not get in the way of student success, and be an effective measure of student learning.

Also displayed on the website, is the Learning Resource Center offering multiple opportunities for students to prepare for the new UDWPE. Adams said that although the new UDWPE is not so different from the old one, “students who wish to optimize their chances for writing a successful UDWPE essay should consider exploring the LRC offerings.”