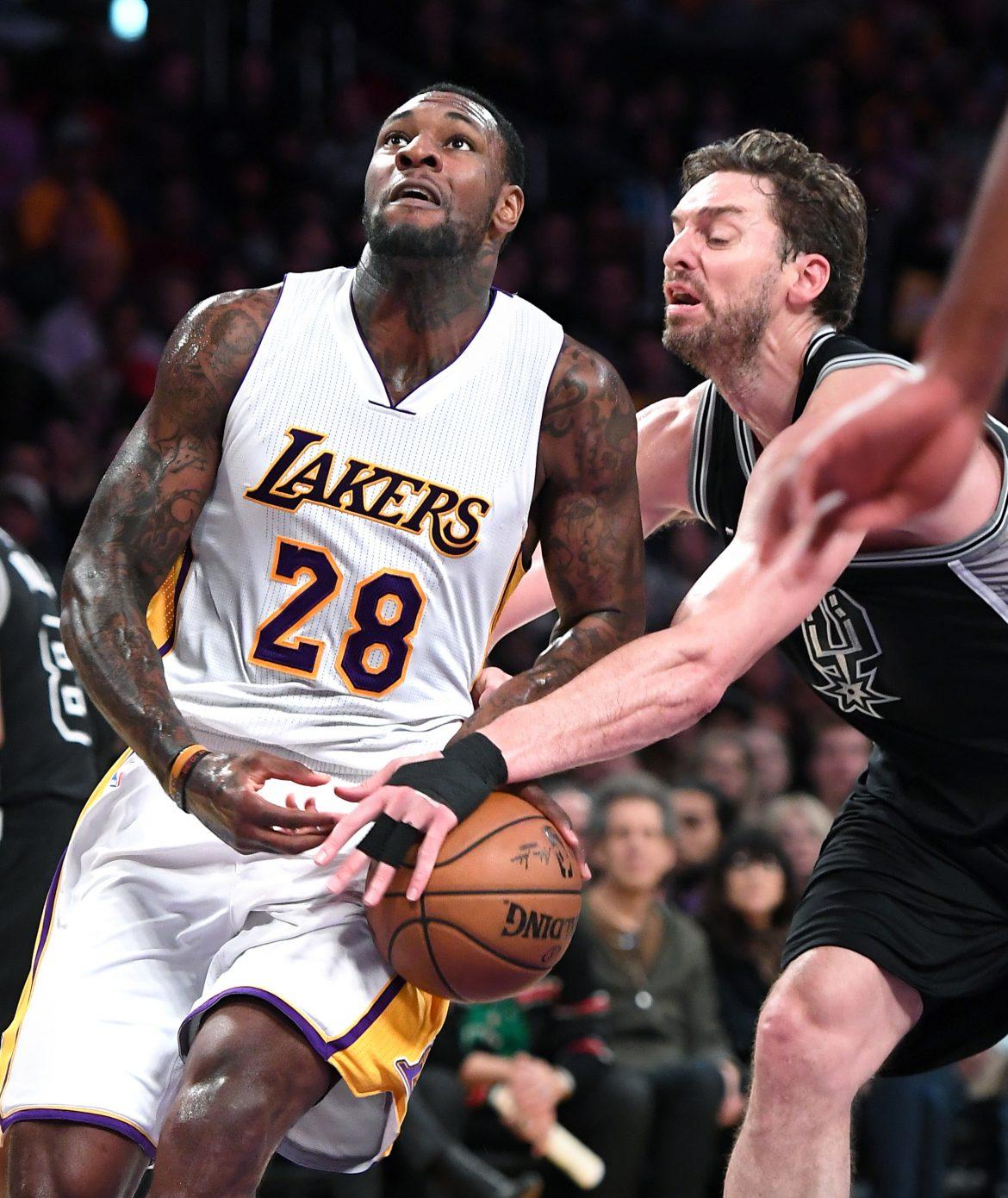 Los Angeles Lakers' Tarik Black has the ball knocked away by San Antonio Spurs' Pau Gasol while driving to the basket on Sunday, Feb. 26, 2017 at the Staples Center in Los Angeles, Calif. (Wally Skalij/Los Angeles Times/TNS)

Just a few short months ago the Los Angeles Lakers had a record of 10-10 and the possibility of a playoff run was not out of the realm of possibility.

Since starting the season on a positive note with 10 wins through their first 20 games, the Lakers are 9-31 in their past 40 and sit at the 14th spot in the Western Conference, with the third-worst record in the NBA. Their poor performance, combined with some questionable free agency moves, prompted team president Jeanie Buss to shake up the front office.

Los Angeles Laker legend Magic Johnson was hired as the new President of Basketball Operations, beginning a new era for the team.

“I think it’s a really good change for the Lakers,” said finance major and Laker fan Narek Pilipossian. “They needed a fresh start under new management. Jim just wasn’t getting it done and Laker fans are tired of losing.”

Since legendary owner Jerry Buss passed away in 2013, the team has failed to make the playoffs in three straight seasons and has a record of 65-181. This is the most futile stretch in the history of the franchise.

The Lakers are second in the NBA with 16 championships under their belt, but had fallen to the doldrums of the league under the leadership of Jim Buss. Some believe Jeanie may have waited too long to pull the plug.

“Change is always good, but it should have been done earlier,” said kinesiology major Jacky He. “At this point it gives off a vibe of tanking midway through the season.”

The term ‘tanking’ refers to a team intentionally losing games to increase their chances of a high draft pick come June. Considering the Lakers only keep their pick if it falls in the top three, losing might be of their best interest. Even so, it does not sit well with some fans.

While the record may be terrible the past three seasons, the draft picks of D’Angelo Russell, Jordan Clarkson, Julius Randle, and Brandon Ingram actually have given the Lakers a solid young core.

What had hurt the Lakers are the off-seasons in which Jim Buss and Kupchak consistently missed signing superstar free agents and settled for low-caliber players at questionable prices. Take the signing of former Cleveland Cavalier center Timofey Mozgov last summer for four years and $64 million. Majority of fans would agree Mozgov was not worth that amount of money.

“The firings are great for the Lakers since the front office has not been able to make serious moves the past couple seasons,” senior Jose Medrano said. “Magic Johnson is now calling shots and looking forward to off-season acquisitions, which I am excited for!”

Whether or not Magic will be successful in a front office role is to be determined. He coached the team briefly in the mid 1990s, but struggled and his stay was short-lived. What has become apparent though, is that his hiring has brought a new wave of optimism to the Laker’s fanbase.

Whether or not the hiring is indeed “magical,” fans will have to wait and see.