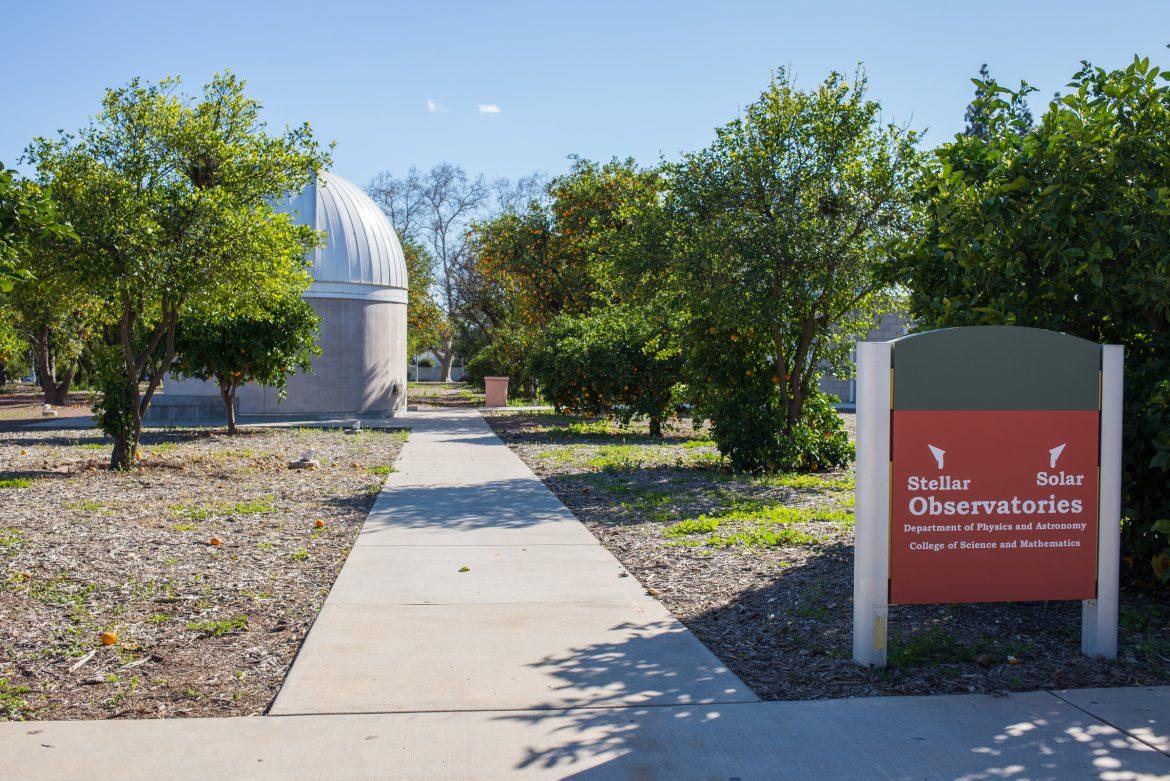 Stellar and Solar Observatories at the Orange Grove at CSUN next the duck pond Photo credit: Alejandro Aranda

“It is very likely one or up to three of the presently known seven Earth- size planets around TRAPPIST-1 can sustain life, based on conditions we have here on Earth,” said Farisa Morales, a CSUN physics and astronomy professor who works at NASA’s Jet Propulsion Laboratory (JPL).

Morales said that the planets labeled E, F, and G are all in the Habitable Zone. This means that liquid water could exist on the surface of these planets if present.

According to NASA’s press release on TRAPPIST-1, water is the “key to life as we know it.” Therefore, if liquid water exists on these planets, it is very possible that some kind of life could be present as well.

“The thought of life on other planets is thrilling [and] terrifying as well as fascinating. The innovation and evolution of technology and humankind could be very beneficial for our planet and hopefully to create a positive change for future generations,” said Farah Malla, a CSUN graduate student.

The star around which the TRAPPIST-1 planets revolve is an ultra-cool dwarf star about the size of Jupiter. This means that it has about eight percent of the sun’s luminosity, said Morales.

In NASA’s press release about TRAPPIST-1, “all seven of the TRAPPIST-1 planetary orbits are closer to their host star than Mercury is to our sun.”

The planets’ orbits are shorter and they are tidally locked since the TRAPPIST-1 star is so much smaller than the sun. Like Earth’s moon, the planets are always showing the same face toward the star, according to Morales.

NASA’s press release also stated that if a person were to stand on the surface of any of TRAPPIST-1’s planets, they would possibly be able to see the other six planets’ geological features or clouds. These planets would look as big as the moon in Earth’s sky.

Since the planets are tidally locked, the TRAPPIST-1 planets’ weather patterns would be completely different from Earth. This could include “strong winds blowing from the day side to the night side, and extreme temperature changes,” according to NASA’s press release.

Due to Earth being the only example scientists presently have of an inhabited planet, they will be using NASA’s James Webb Space Telescope (JWST) to look for various pollutants produced by living beings, said Morales.

“I don’t think humans will ever expand into space, but I believe in aliens,” said Serra Koyshman, a senior and English major.

The JWST will launch in 2018. Morales said its very high sensitivity will allow it to detect the components of a planet’s atmosphere.

Malla believes that if there was life on one of these planets, the way humans would react would depend upon how society portrays them.

Morales said that if signatures of life are found by the first team of scientists, another team or multiple research groups will be asked to confirm it. Once confirmed, scientists will immediately announce their discovery.

“Science relies on the process of dissemination to progress,” said Morales.