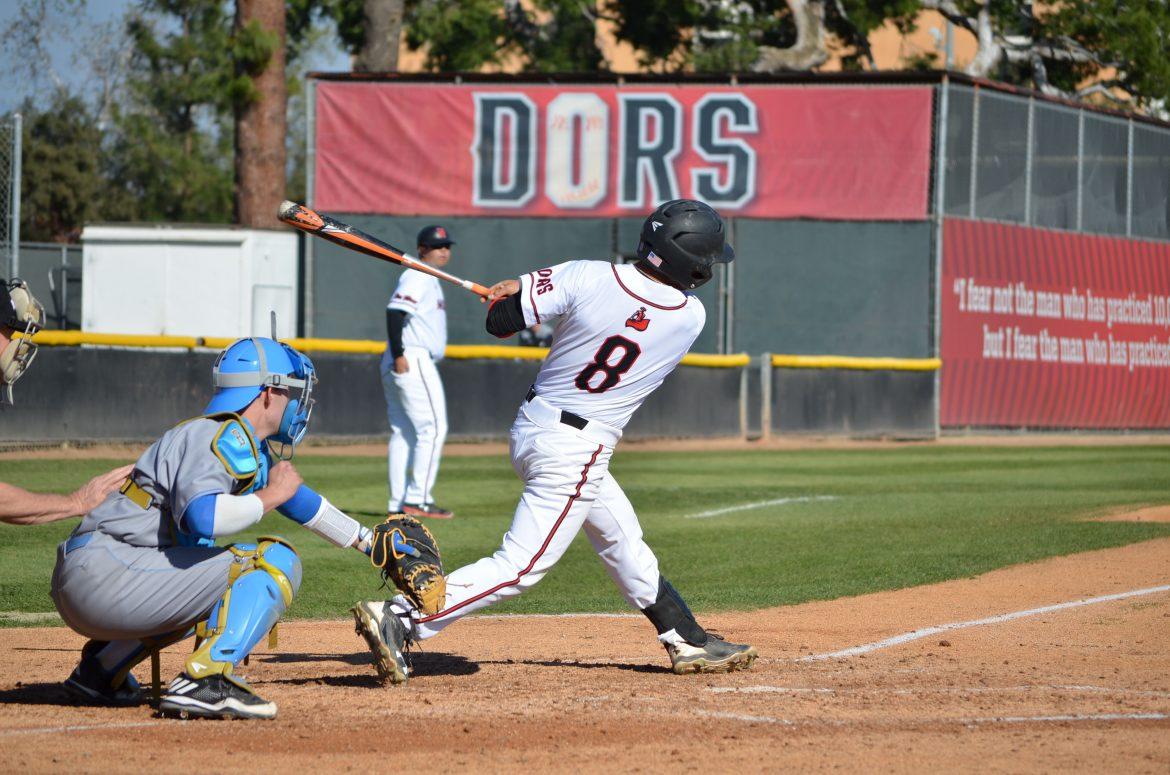 Senior shortstop Fred Smith, #8, grounds out to third base in the third inning against UCLA on Tuesday, Feb. 28, 2017. Smith went on to hit a home run during the sixth inning. Photo credit: Anthony Martinez

CSUN took on the UCLA Bruins at home on Tuesday looking to win three straight against the 2013 national champions.

It was a back-and-forth affair as the Matadors were able to come out as victors, 6-5.

On the mound for the Matadors was redshirt senior Drake Atlee going against lefty Justin Hooper for the Bruins.

The Bruins were able to get on the board after a double steal with one out in the top of the second inning, forcing two runners into scoring position.

Infielder Ryan Kreidler singled up the middle for the Bruins, scoring two and giving UCLA the 2-0 lead.

Northridge retaliated in the bottom of the second when catcher Albee Weiss hit a long home run to left field, cutting the deficit to 2-1.

CSUN second baseman Alvaro Rubalcaba took the Bruins’ momentum out of the inning after turning an impressive four-six-three double play. Atlee was pulled for freshman Kyle Nicol, who got out of the inning with a ground out to third. In the top of the fifth inning, Nicol hit the first batter.

After a sacrifice bunt and a wild pitch, Bruin outfielder Brett Stephens hit a long foul ball down the left field line scoring the runner from the third on a sacrifice fly.

Going into the bottom of the fifth, the Matadors were down 3-1 with one out when third baseman Nolan Bumstead was hit by a pitch. Bumstead advanced to second on a wild pitch and Rubalcaba moved him to third on a single to left field.

Rubalcaba advanced to second on a wild pitch, which appeared to have gotten stuck in his hand, leaving a runner on second and third with one out. Junior Elias Orona stepped up to the plate and ground out to third, scoring Bumstead and cutting the Bruins lead to just one.

In the bottom of the sixth inning, senior pitcher Moises Ceja took over for starter Kevin Hooper. Northridge took little time figuring out Ceja, as starting shortstop Fred Smith led off the inning with an opposite field home run to deep left center, tying the game at three.

“I was really just trying to hit the ball up the middle,” said Smith who only hit one home run all of last year. “I got the pitch I wanted, 1-0 count, fast ball away and the outcome speaks for itself.”

In the next at bat, senior Riley Conlan lined a single to left field ending Ceja’s day.

Redshirt sophomore Matt Walker took over the mound for UCLA. After a wild pitch and two ground outs, Conlan advanced to third on a pass ball during pinch hitter William Colantanos at bat.

Colantano got on base due to a walk but continued running to second base and got there safely after the pitcher declined to throw it to second base with two outs and a man on third. Nolan Bumstead hit a clutch line drive up the middle, scoring two and moving to second on an error by the center fielder.

Next up was second baseman Rubalcaba, who followed Bumstead’s lead and hit a line drive up the middle, scoring the third baseman and giving Northridge a 6-3 lead in the sixth.

Freshman Blake Schriever was on the mound for CSUN to start the seventh and walked the second two batters he faced in that inning. Starting center fielder Justin Toerner took over on the mound facing junior Sean Bouchard and gave up a two run home run cutting the lead to 6-5.

The Matadors did not give up another run as senior Conner O’Neil was able to convert the four out save to close the game out for Northridge.

This is Northridge’s third straight victory against the Bruins.

This weekend the Matadors take a road trip to No. 17 Vanderbilt, something head coach Greg Moore is excited for.

“We get 27 innings and if we get extra innings that’s even better,” Moore said. “We just want reps, doesn’t matter who we’re playing, we want to play anybody and everybody.”

CSUN is now 4-4 on the early season as they travel to Tennessee to take on the Vanderbilt Commodores this Friday at 2 p.m.