CSUN ice hockey falls in first round at regionals 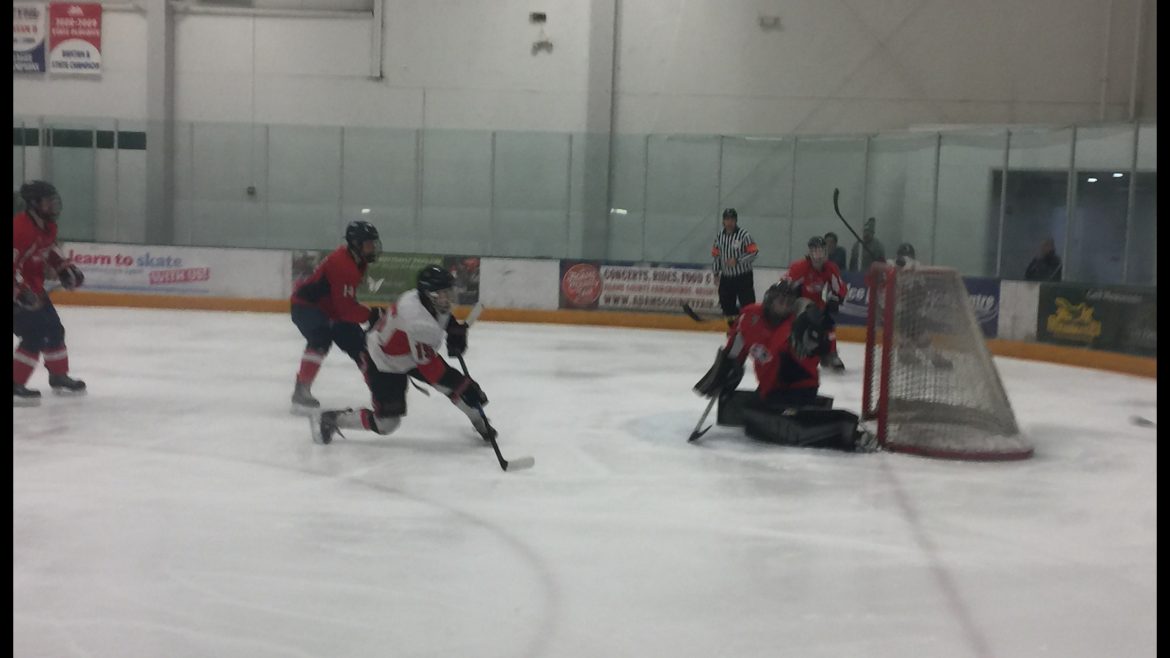 Quentin Abaya (15) gets a shot on goal but clanked off the pipe denying the Matadors a goal and the lead Thursday afternoon at the Ice Centre at the Promenade in Westminster, CO. Photo credit: Solomon Ladvienka

No. 10 Matadors ice hockey team earned a bid in this year’s West Regional Tournament in a win-or-go-home elimination tournament and was eliminated by No. 11 Metro State University, Denver Roadrunners.

Riding the only three game losing skid all season, the 25-8-0-1 Matadors were looking to regain momentum after failing to repeat as Los Angeles Kings College Cup Champions last week.

Returning to the lineup from suspension, defenseman Levi Bolls and winger Ellis Bourgoujian looked to make an impact on the game. With only scoring a goal in the last nine periods, top goal-scorer winger Eli Berengut was also back in the lineup after nursing a broken rib during the Kings College Cup game.

“The mindset going into regionals was to play our game,” senior defenseman Evan Sharpshair said. “Our team was successful all year when we were fast and physical and playing simple hockey. That was the plan.”

During the Matador’s powerplay an intercepting Roadrunner took the puck from MSU Denver’s zone, skated toward CSUN goaltender Brandon Kalvoda and slipped it past Kalvoda’s five hole.

Though still nursing a sore groin, and suffering kidney stones, captain Alex Reints received a pass from Berengut and Reints buried the puck in the back of the net, finally tying the game.

“Just knew that we had to get it back,” Reints said. “We’ve been down before and had to light something for the team.”

MSU Denver regained the lead in the second, but forward Cam Rorick found linemate Evan Wright battling in front of the net. Wright tied the game for the Matadors for the second time of the night.

“I didn’t feel like I was playing my best early in the game, so when I got the puck on my stick at that moment, I knew I had to put it in the net,” Wright said. “The fact that it was the tying goal in the final seconds of the period was huge. It gave everybody in the locker room the feeling that we were going to win the game.”

The Matadors found themselves tied going into the final period. Back-to-back goals from MSU Denver led CSUN to scrap back in the closing minutes of the game.

Senior Drew LaGaly battled down low and slipped the puck past the Roadrunner’s goalie. But the goal was waved off because the referee called the play dead before the puck went in.

“We missed our chances,” said coach JP Gale. “They buried their [shots].”

CSUN went on the powerplay in the final minutes and pulled Kalvoda from the net to add an extra attacker. MSU Denver added an empty net goal and the Roadrunners defeated the Matadors, 5-2.

“We achieved almost all of the goals that we set as a team earlier this year,” Gale said. “We wanted to win a conference championship, Kings Cup, and make it to regionals. We didn’t get far in regionals but we came up just a little bit short, battling injuries these last couple of games.”

The Matadors finished with 25 wins on the season, the most wins this program has ever seen, along with defeating San Diego State University to become the West Coast Hockey Conference champions.

“Obviously things didn’t work out the way we wanted in the end, but we all stuck together and played as a team,” Wright said. “We picked up some momentum and confidence going into next season.”

CSUN will regroup next season with a younger lineup but seniors Bourgoujian, Sharpshair, and LaGaly suited up for CSUN for their final time.

“It’s been a great season,” Reints said. “Everybody was working hard, on- and off-the ice. Everyone was there for each other all the time. We had great team chemistry, and it showed on the ice.”

With Reints returning next season, young guns John Michael Laurin, Tereck Morales, Quentin Abaya, Will Lesik, Berengut, and Bolls will lead the Matadors in the fall 2017-2018 season and defend their WCHC title.