A special relationship between a catcher and pitcher 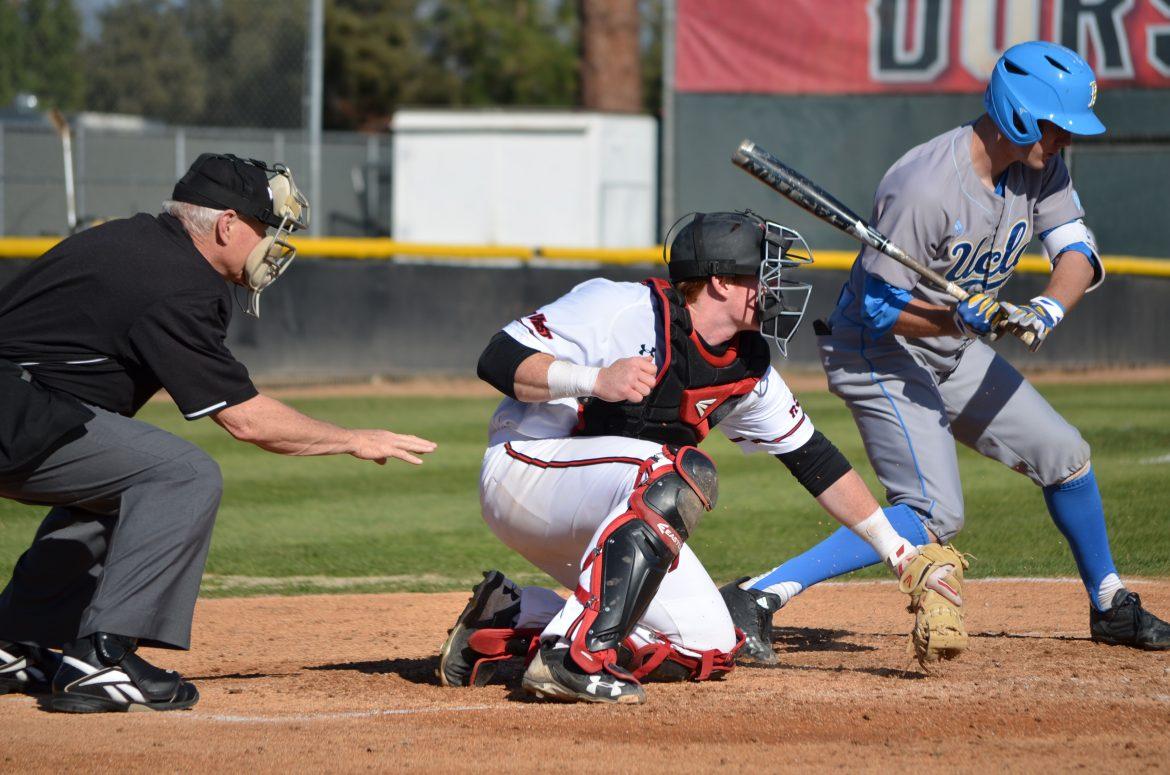 In baseball, communication is key. The relationship between a catcher and pitcher is different because chemistry is crucial in order for them to succeed.

According to Reading the Signs- Communication between the Catcher and Pitcher, the catcher sends signals to the pitcher, generally a sign consisting of a combination of four fingers flashed with the throwing hand. The pitcher may then give a sign for the ball to be thrown and at which direction they want it to land.

There is the unique language that players know, which includes hand signals or gestures, but in order for a team to be successful there must be a type of confidence between one another.

Andrew Weston, CSUN’s baseball pitcher, said that he and catcher Dylan Alexander have worked together for the last three years.

“He knows my pitch plan better than I do,” Weston said. “A pitcher and catcher relationship is the most special on the field.”

Playworks is a nonprofit organization which supports learning inclusive and safe play to low-income schools. Robert Moran, a psychology graduate and program coordinator for Playworks, teaches students about different sports, how to play them, appropriate social interactions and conflict resolution skills. Moran has played sports himself and while playing baseball, he said that the pitcher and the catcher are the main roles.

“The pitcher and the catcher have to have learned behavior that could only be done through practice and time in order to execute their agenda for that game, which is to get that win,” Moran said.

Moran said that the catcher will have his free hand between his legs and will give signs to the pitcher and also has to read the field.

According to Moran, their dynamic is crucial for their offensive game plan to be executed.

Moran said that it’s important for the players to have a healthy relationship on or off the field so they establish trust.

“It’s the most special relationship on the field at that time because without them there would be no plays, there would really be no baseball,” Alexander said. “It’s just that form of communication, it’s not even verbal it’s just physical communication and it’s honestly mental.”

According to Alexander, communication over time is what builds their relationship and what makes it special.

Weston said that he and Alexander play outside off the field together where he also spends time with the rest of the team. Spending time on-and-off the field creates a good bond and friendships.

“We are really close, we all go out to dinner, we all get together outside of the field, just to hangout; so that builds the relationship on the field, when we do get together and have the opportunity to play games,” Alexander said.

Alexander has been playing on the team for three years and said that he trust develops over time.

“They trust me and I trust them, I know what they want to throw in certain situations,” Alexander said.

At times, injuries occur and players are out. Weston said that if either one of them is out, there must be that trust that the next catcher will know what to do.

“In a game situation, if the pitcher is having an off day, I would call time, go up to him, and ask what is wrong, is your arm feeling okay, what pitch do you feel comfortable with right there and I always give him the opportunity to shake off the pitch that I call, so they can throw the pitch that they are most comfortable pitch in that situation,” Alexander said.

As for the rest of the team, Weston’s best advice was to just keep working hard.

“Trust the process and know that it will develop over time,” Weston said.