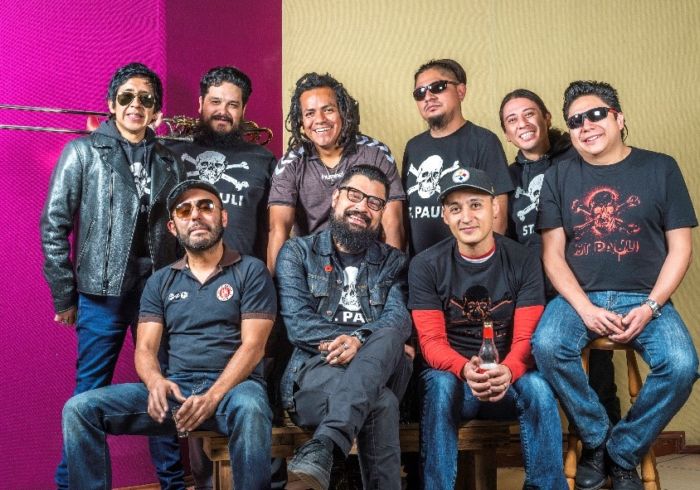 Members of the Mexican ska band, Panteon Rococo, pose for a picture. This year they are celebrating 20 years of musical trajectory. Photo Courtesy of The Music Joint Entertainment Group

The Skanking Reggae festival comes back this year with a lineup composed of international bands.

Since 2010, the festival has aimed to gather people from all parts of the world and expose them to bands along with musicians that lead the ska and reggae genres from different countries.

Mexico City natives and event headliners, Panteon Rococo, are celebrating their 20 year anniversary. Eleven other bands are scheduled this year, ranging from local to international talent, including: Tokyo Ska Paradise (Japan), Dread Mar I (Argentina), The Slackers (USA), and Jackie Mendez (USA) among others.

Founder and promoter, Adrian Antonio, shared that the festival started as an outlet for local talent in the Pico Rivera sports arena. Since then, the demand for more from these genres has grown and bringing bigger artists every year.

“What I did [for the festival] was to unify the local talent of L.A. with an international one,” Antonio said. “The festival has changed throughout all these years and we decided to make a bilingual festival, in English and Spanish, which had never been done before.”

He also added that the richness of any festival is to show that there is culture and implementing bands from other countries only demonstrates people all over the world listen to the same music genres. This applies in the case of the ska and reggae.

This sound derived from Jamaican influences. In the 1980s, English bands like Madness and The Specials adopted the sound of Jamaican artists from the 1960s, such as Prince Buster and The Skatalites. Reggae, on the other hand, was popularized by artists like Bob Marley and UB40.

However, newer bands have shifted their influences to more modern music. Paco Barajas, trombone player of Panteon Rococo, stated the group found a common taste for rock in Spanish. Their sound has then evolved into a bigger production and implementation of other instruments found in Latin American music.

Panteon Rococo released their debut album in 1999, making them an instant hit throughout Mexico thanks to their single “La Dosis Perfecta.”

Twenty years after they first started making music they are now headlining the festival and planning a global tour.

“We are happy about this effort to create cultural events that invite Mexican artists like us,” Barajas said.

When asked what kind of audience attends the festival, Antonio said that he notices people from all social classes and from different parts of the world.

“Everyone is welcomed because that’s what this is all about, having a good experience without being discriminated [for your economic status], on the contrary, our audience is very cool and collaborative.”

Unfortunately, according to Antonio, the sales of the festival have been affected by the current political climate of the country. People are not buying tickets because there is a fear of something bad happening if they go out. He urges everyone who wants to come to the event to attend and have faith that everything will be fine.

Antonio and his crew will continue the Skanking Reggae festival for next year. They are approaching the 10th anniversary of the event and their goal is to expand it for two days and invite all the artists that have played at the event throughout the years.

The event, which is suitable for all ages, is set to happen on March 11 at the Shrine Expo Hall.