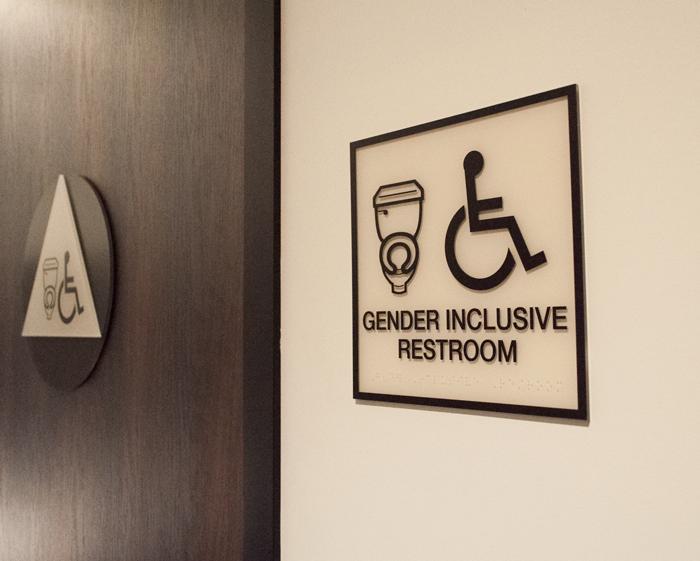 A gender inclusive restroom can be found inside the Oasis Center as well as throughout the CSUN campus allowing any and every gender to use the restroom. (Raul Martinez / The Sundial)

In May of 2016, the U.S. Justice Department, under the direction of former Attorney General Eric Holder, announced that Title IX of the Educational Attainments Act of 1972 applied to transgender students.

Students may be familiar with Title IX, which states that “No person in the United States shall, on the basis of sex, be excluded from participation in, be denied the benefits of, or be subjected to discrimination under any education program or activity receiving federal financial assistance.” CSUN has its own Title IX coordinator, Susan Hua, who ensures the campus follows the law.

“When we say that CSUN prohibits discrimination and harassment on the basis of a protected status, that includes gender identity and gender expression,” Hua said.

The Obama administration took the position that these protections also applied to the right for transgender students to use the bathroom of their identity, while opponents stated that the federal government was overreaching.

The Trump administration agreed. Trump, who initially stated during the 2016 elections that he did not believe the policy should be rescinded, allowed his administration to remove the recommendation of Title IX that protected transgender students.

“You leave it the way it is,” Trump said, in regards to the controversial battle in North Carolina to remove LGBTQ protections in 2016. “There have been very few complaints the way it is.”

At the CSUN Pride Center, some students, like Neen N. did not initially see a change in daily life when the original recommendation for interpretation of Title IX was issued.

“I was out at that point, but it didn’t really affect me,” Neen said. “I didn’t really think about it a lot. At first glance, I was like, ‘Eh, whatever.’”

With the rescinding of the initial recommendation, states are free to interpret Title IX individually and remove protections for transgender students.

“We’re upset with this but not surprised because the current administration hasn’t been supportive of really any marginalized community,” said Sarina Loeb, coordinator for the Pride Center. “Fortunately we live in California, where there are still protections in place.”

California does have its own bathroom laws, stating that all single-occupant bathrooms must be gender neutral. It also protects against discrimination based on gender expression, but Loeb said students who travel out of state will still be affected.

“I think a lot of times the media makes it seem like it’s a bathroom issue but it’s a human rights issue. It’s about the rights of trans folks and non-binary folks to exist in public spaces,” Loeb said. “Every human, when they’re out and about, will need to use a public restroom and if the government is saying that [trans individuals] can’t use a restroom, then how can they exist in public spaces?”