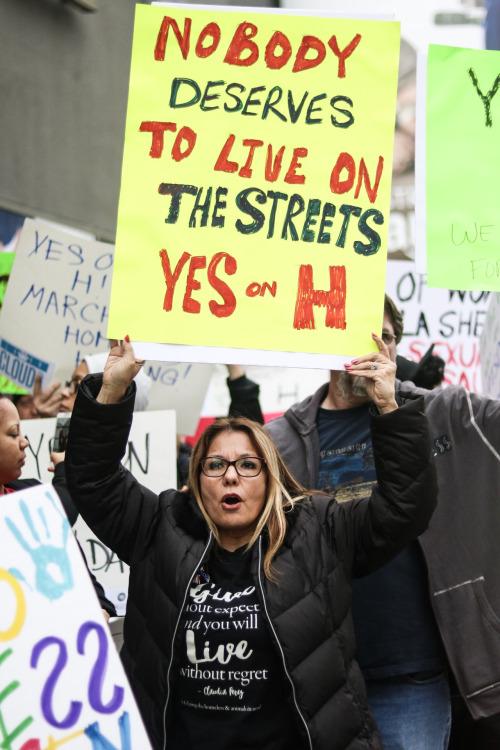 A woman marched in favor of Measure H, on Saturday, Feb. 25, during the Yes on H march in Hollywood. Phot Credit: Lauren Valencia

Tuesday night saw Los Angeles voters reject Measure S, the controversial measure which would have placed a two-year moratorium on high-density development in the city.

The measure lost by almost 40 points, with the final vote tally at 68 percent of voters voting no and 31 percent voting yes.

Measure H, the LA County-proposed one-fourth cent sales tax raise, reached the two-thirds majority needed to pass with a similar margin, with 67 percent of voters in favor and 33 against.

“From the moment Measure S was first introduced as the ‘Neighborhood Integrity Initiative,’ a broad coalition began to assemble, warning that it would make Los Angeles’ housing crisis worse and deal a blow to its recovering economy,” the anti-S website wrote in their statement of victory.

The Los Angeles Times reported over $13 million was spent between the two campaigns, with more than $5 million coming from the AIDS Healthcare Foundation.

“The job of the mayor is to get things done, and that’s what I’m going to keep doing for our city,” Garcetti wrote on Twitter, winning re-election Tuesday.

Of the 5.25 million registered voters in Los Angeles County, only 593,000 came out for the election, according to county results. A turnout of roughly 11 percent. Results can be found on the county registrar’s online vote count.