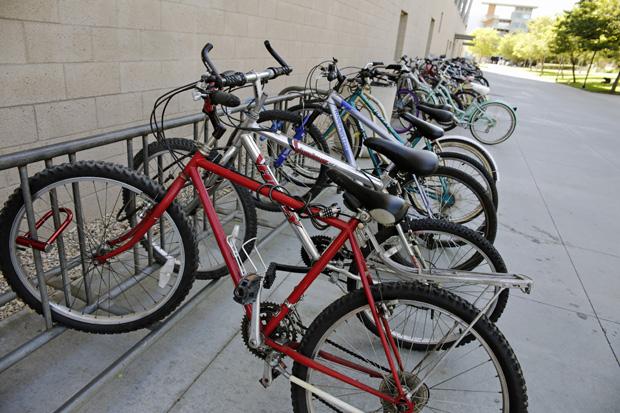 The bike rack next to Manzanita Hall. File Photo/ The Sundial

Bikes have been reported stolen from a number of areas around campus, including Sierra Hall, Bayramian Hall, and the University Park Apartments. The increase in reports began on Feb. 24 and continued through March 6.

The bikes that were reported stolen had been secured with a variety of locks. Five of the bikes were secured with a cable lock, four were locked with U-locks, and one used an unknown type of lock.

“I use the bike racks and I feel safe using them with my U-lock,” said Elizabeth Perez Monarrez, communications major. “I used to use a cable lock and then I got my bike stolen back at housing and since then, I use a U-lock.”

Perez said she tries to pick a bike rack that’s more visible because she hopes it being located in a busy area will deter thieves.

“I lock my bike [on a rack by] Manzanita Hall,” said Perez. “I rely on that bike rack because there are so many windows and the bike racks are visible so I can see my bike if something were to happen to it.”

An email was sent out to students to alert them about the theft and offer tips on how to secure bicycles and prevent them from being stolen. The tips include registering your bicycle online, utilizing Matador Bicycle Compounds and using a high-quality U-lock.