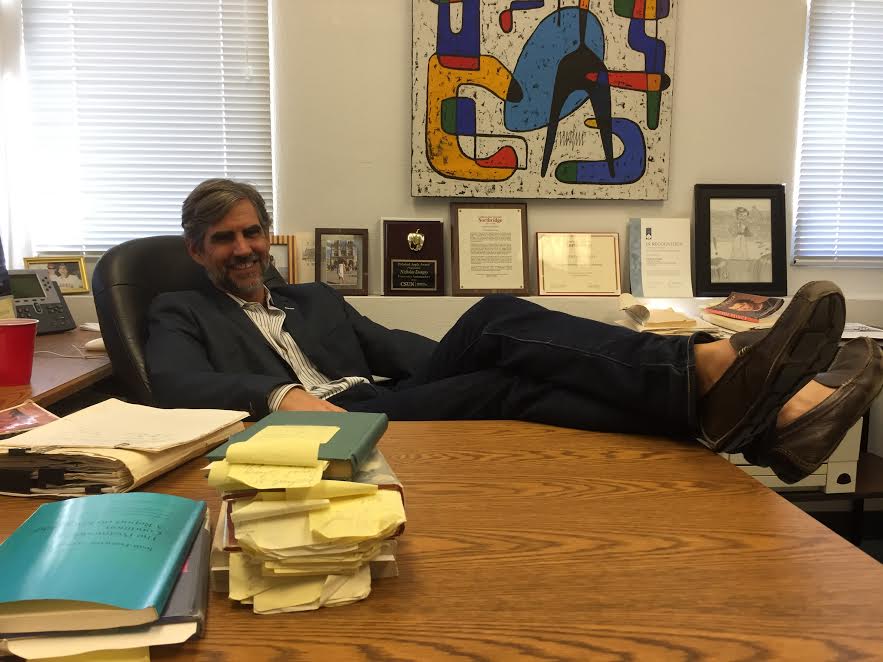 Professor Dungey lounges in his office as students speak to him after class. Photo credit: Heidi Weinrich

Professor of Political Science, Nicholas Dungey, aims to expand the knowledge of his audiences through a project podcast called, Dungey State University (DSU).

DSU is a project that teaches people how to expand their consciousness about the world around them when it comes to political philosophy.

The podcast is non-ideological and non-partisan. DSU exists in order to analyze the theoretical and philosophical information that is present in current events. According to Dungey, accurate philosophical knowledge is presented so that the public can learn how to make informed decisions.

“This is the philosophical information necessary to allow people to put current events into a deeper and more comprehensive context,” Dungey said. “It should not be something that is just simply taught in universities.”

Dungey’s co-host, Walker Uhl, is a former CSUN student who participated in all of the professor’s classes. A few years after graduating in 2010, Dungey approached him with the idea of DSU. However, Uhl declined the offer.

According to Uhl, Dungey approached him six months later with a more focused idea of what the project would be. In turn, Uhl accepted the idea and agreed to be on the show.

“I asked him, ‘why did you come back to me?’ and he said, ‘because you were the only one who was truthful with me about needing focus,'” Uhl said.

In addition, Uhl is responsible for the technical side of DSU. He said not everyone has the knowledge of political philosophy that Dungey possesses, so he tries to be the one to present more common language to the audience during the show.

Currently, Dungey and Uhl have been discussing executive power and the president. They relate current events to the writing of Niccolò Machiavelli, John Locke, and Thomas Hobbes.

“A lot of things in the news have stemmed from things that have been written 500 years ago,” Uhl said. “If you don’t study history you’re doomed to repeat it, as Winston Churchill said.”

When it comes to how this philosophical information relates to current events, Dungey said being ignorant of philosophical origins is dangerous. More specifically, what it means to have rights, equality and being objectively free, these core ideas will disappear. In fact, he said it has already begun.

“You are seeing a dismantling of the institutional framework of government. You are seeing the emergence of a type of authoritarian regime centered in an extraordinary powerful and expressive executive branch,” Dungey said.

According to Dungey, once we lose these core ideas, they are extremely difficult to get back. Therefore, it is important to understand political philosophy.

He also mentions, individuals living in a social and political culture, in which the debate over ideas, natural rights, equality, etc. has never been more critical in this country in the last 150 years since the Civil War.

Moreover, CSUN students are listening to DSU in order to learn what it means to be themselves and how they are going to live their lives. The fusion of learning and loving plays a major role in expanding one’s consciousness, according to Dungey’s website.

Senior Anna Keppel, an avid listener of DSU, never misses an episode and listens to it as soon as a new one is released.

“The people who listen will be able to take their emotional strength, new found happiness and clarity, and put that into the world and be able give those things back,” Koppel said.

According to Koppel, new episodes sometimes come out every week or month. Although they have been posted every two weeks.

“The podcast is mind-altering and life-changing,” Koppel said. “He is a brilliant man who really just sees the world so differently and in such a unique way. I think we’re really lucky to hear his point of view.”

“Professor Dungey’s passion and enthusiasm for the subjects he discusses is contagious and leaves you eager to hear the next podcast,” Hopps said.