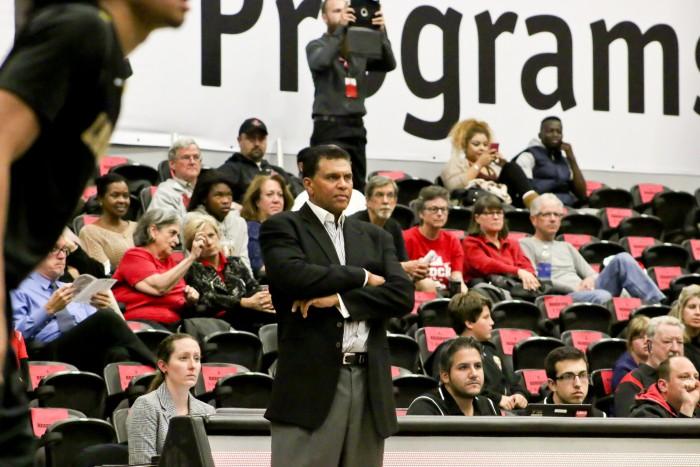 CSUN men's basketball head coach Reggie Theus has had to reconfigure his roster due to violations and investigations over the past year. (File Photo/Juan Pardo/The Sundial)

The sixth ranked Matadors took on the third ranked Titans at the Honda Center Thursday afternoon in the Big West Tournament.

Despite their poor play of late, CSUN showed up and looked well in the first half of the single game elimination tournament. Northridge started the game on a 14-4 run to lead the Titans 33-26 with just under four minutes left in the first half.

After a 30 second timeout with 3:56 left in the first half, Fullerton trimmed CSUN’s lead by three, making it 41-37 to enter the second.

“We played a good first half,” said head coach Reggie Theus. “We did everything we were supposed to do game-plan wise.”

The Matadors spread the wealth on the offensive end in the first half with six players scoring above five points and no players with double digits.

Junior guard Kendall Smith led the Matadors in points (9) and assists (5) in the first half and the team shot a perfect 6-6 from the free throw line.

CSUN was not the same team to start the second half. The Matadors allowed the Titans to go on a 17-4 scoring run to lead off the half giving Fullerton a 57-45.

“At the end of the first half, I thought we had a breakdown defensively and it felt like it took the wind out of us a little bit going into halftime,” Theus said.

The Matadors started the first nine minutes of the half shooting 2-11 from the field and turning the ball over seven times, matching their total from the first half.

CSUN was unable to overcome the Titans tremendous second-half start, only coming within eight points of Fullerton for the rest of the game.

The Titans shot the lights out in the second half shooting 15-25 from the field, 3-4 from the three point line and 11-13 from the free throw line.

Fullerton won the game with the final score of 81-68.

Senior guard Aaron Parks played his final game for the Matadors and finishes as one of 18 Matadors to score more 1,000 points in their career.

“If you had 12 guys like him, with his attitude, with his work ethic, you’d be a heck of a basketball ball team,” Theus said. “Not one time in four years have I ever had to ask him to pick it up.”