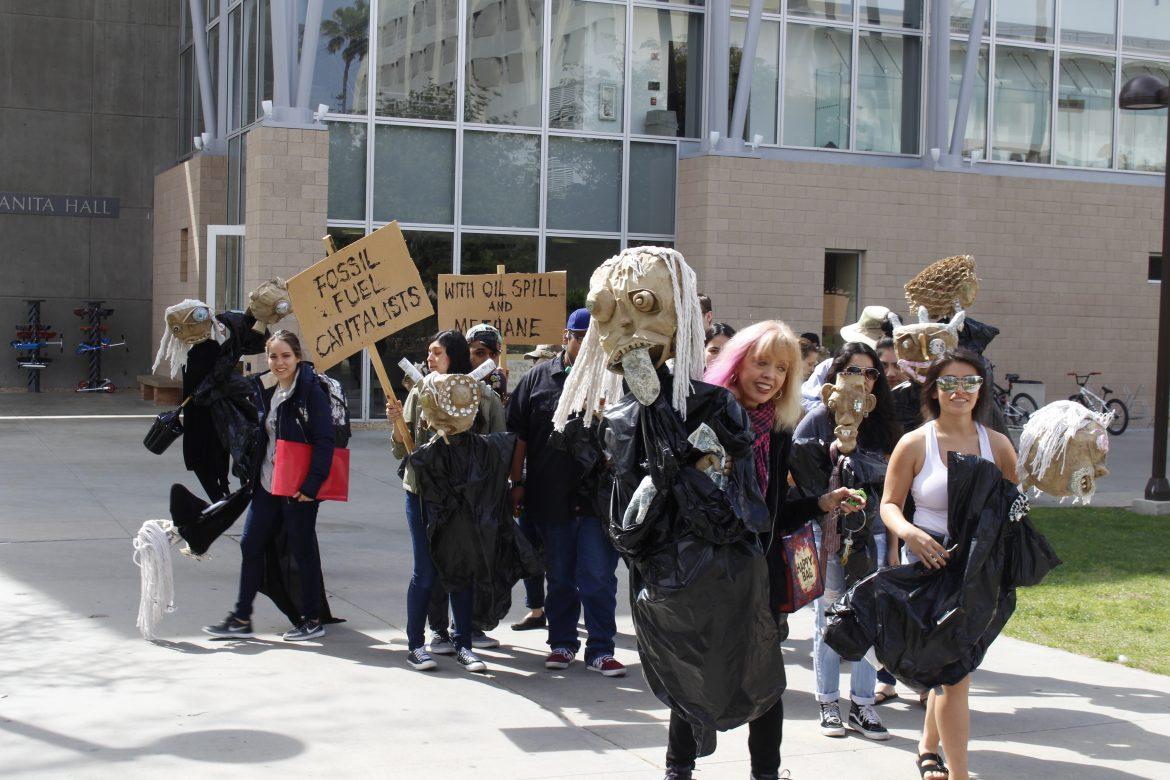 Dr. Edie Pistolesi leads the Art 100 students from Manzanita Hall to the Oviatt Library. Pistolesi and students stopped and engaged with interested students as they walked. Photo credit: Josselyne Rivas

Derian Blandon, vice president of the organization One Struggle CSUN, which tries to inform the campus about the history of capitalism and how it impacts the science of climate change, said the demonstration was a mock rally.

“The grotesque puppets represent the CEOs, politicians, bankers and lawyers of the fossil fuel industry who are celebrating the profits they are making by destroying our planet,” Blandon said. “We wish to point out the seriousness of their actions; both local and global. From the methane blowout at Porter Ranch to the Dakota Access Pipeline, and much more, we use humor and the power of visual art to make a serious point.”

Pistolesi, whose work in political art began in 2014, wanted to use humor and recyclable materials to address issues like global warming. The “grotesque figures” are made of plastic bags, toilet plungers and paper and were inspired by work done by other political artists that were looked at by Pistolesi’s class.

“Art is about ideas and culture,” Pistolesi said. “We are facing planetary destruction, it’s not time to do a cute little collage about our pets in the classroom.”

The art display, named “The Fossil Fuel Capitalist Puppets, On The Beach, With Oil Spill and Methane,” was not created by the art students carrying them, but by professor in art education Vida Lui, who used the event as a teaching moment for her class.

“I wanted them to have their own take and opinion on anything that they experience and to be aware of the earth and natural resources,” Lui said.

Lui said the students were engaged in performance art and wanted her students to experience using their body as an art medium.

“The sculptures, they scare me a little bit, what [are] they supposed to be?” Antiaga said. “Protesting here isn’t going to help at all.”

Blandon said the organization is planning to hold monthly protests and demonstrations to bring more awareness to the campus community and welcomes other clubs and onlookers to join in.