The Matadors come from behind to take game three 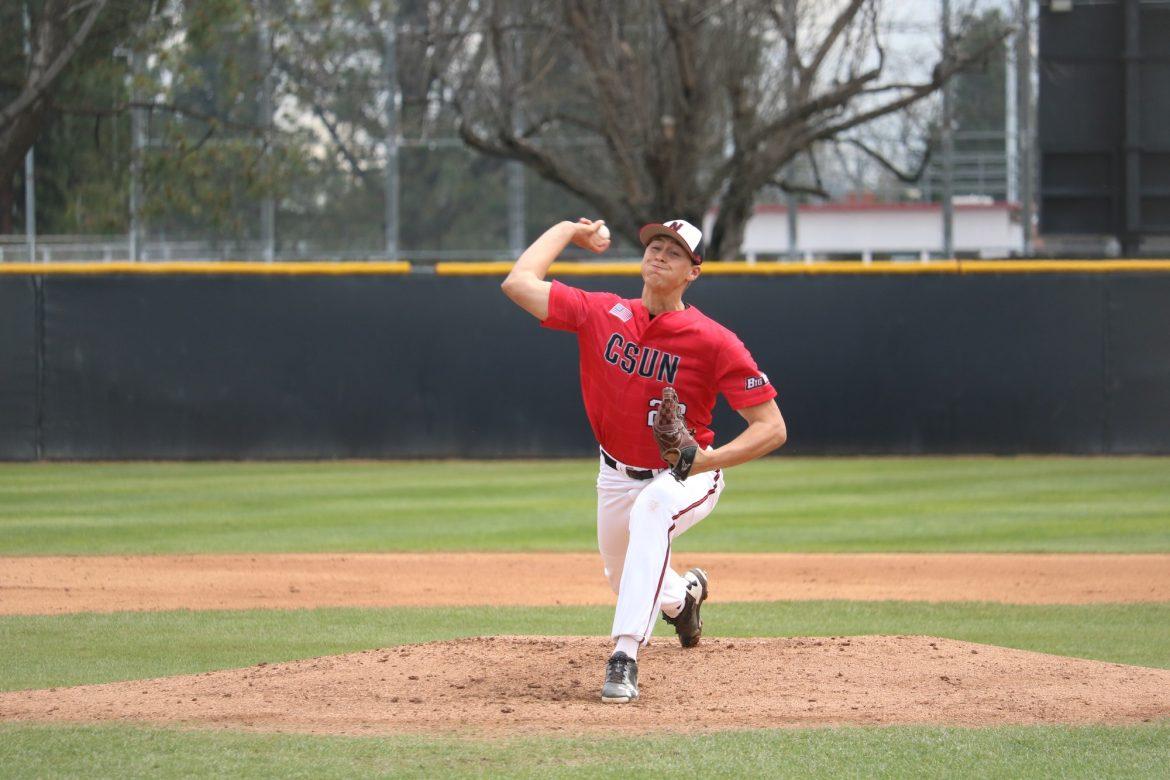 CSUN baseball came back from three runs down against the Purdue Boilermakers to win 5-4.

Junior Nolan Bumstead had a two-run double in the fifth inning to help the Matadors take the win.

The power went out on the school campus for about three innings.

Junior starting pitcher Tei Vanderford kept them in the game only allowing two earned runs in his 7.2 innings pitched and striking out seven batters, and allowed the Matadors to come back to win.

“It is important in our dugout that we understand it is just a matter of time before we wear a game down,” said coach Greg Moore. “But we have to work for it…there was a sense of calm in there that kept working and they really believed in [Vanderford] that started the game.”

Junior Alvaro Rubalcaba started off the game on the right foot with a RBI single in the second inning to give them an early 1-0 lead.

Purdue answered back in the top of the third with a sacrifice fly to tie up the game 1-1, with two men on Purdue’s Nick Dalesandro hit a line drive to right field, but junior Elias Orona made a great dive catch to save two runs and keep the game tied at one.

In the fourth, Purdue took the lead for the first time in the series with back to back doubles. Purdue’s Bryce Bonner had a RBI making the score 2-1.

In the fifth, Purdue added two more runs, which gave them a 4-1 lead.

However, in the bottom of the fifth inning, the power came back to the campus and the Matadors loaded up the bases with nobody out. Weiss hit a the ball high and hard down the line, but was called a foul by the home plate umpire. Moore came out to argue, but the umpire crew kept the call as is.

Weiss still worked out a walk to score a run, then junior Nolan Bumstead came up and hit a double to right center to score two runs and tie the game 4-4. Junior Jake Spurlin drove in the go ahead run with a RBI ground out, giving the Matadors the lead 5-4.

“Our dugout is fueled by electricity,” Moore said. “The bench has a few cords plugged into it and when it came back on I thought we had a chance.”

Starting pitcher Tie Vanderford finished his outing strong as he got nine of his last 11 batters out and only allowed one hit.

“As a whole I had a better pitch plan and made more simple,” Vanderford said. “I slowed things down, stick to what has been working lately and get back to that.”

Senior closer Conner O’Neil came in with a runner on second and two outs in the eighth, but got a big strike out to end the inning.

O’Neil closed the out the game, striking out the side in order for his third save of the year and giving the Matadors four straight wins and a 10-6 record.

“I think Conner is starting to hit his stride,” Moore said. “He is healthy and he is strong.”

The Matadors look to sweep Purdue on March 13 at noon ending their four- game series in Matador Field.