2017 NCAA Tournament: A Guide to the Madness 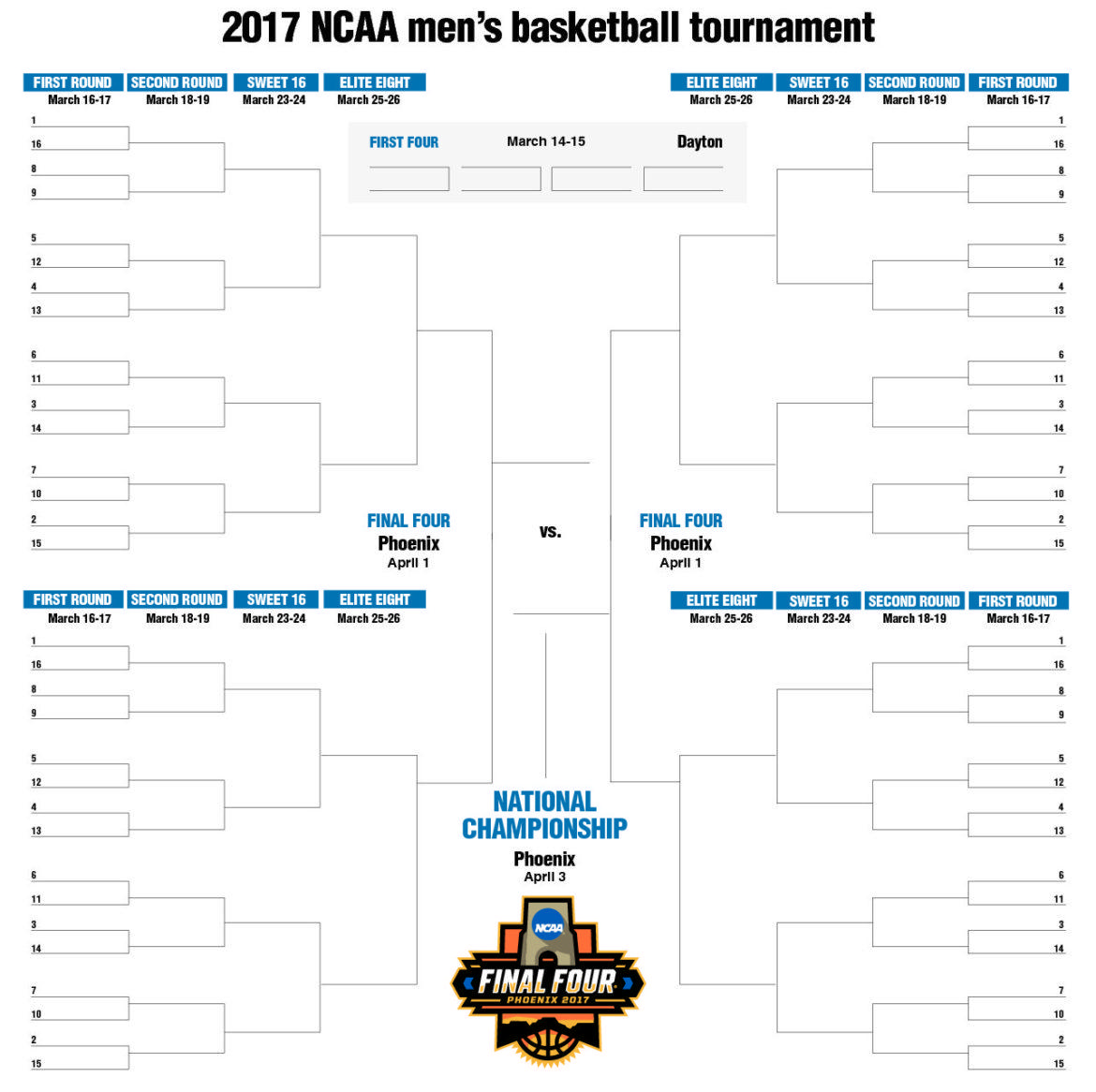 The calendar has turned to March, which means one of the most exciting weekends in sports is about to be upon us. Here is a guide to the “madness” that will unfold over the next-three weekends.

The east region features defending champion Villanova and Duke as the two top seeds. The Wildcats are strong once again after winning the title in 2016, as senior Josh Hart and forward Kris Jenkins led them to a 31-3 record and Big East Championship.

Duke has closed the season on a hot streak after losses to Syracuse, Miami and North Carolina in the past couple months. The Blue Devils locked up a two seed despite having eight losses, which is unusual in the NCAA Tournament.

Third-seeded Baylor also could be a wild card. The Bears were ranked number one for part of the season before several mid-season losses brought them down. They are still dangerous if they get going.

Also look out for the six seed in the region, SMU, as a potential dark horse. The Mustangs are 30-4 on the year and could make some noise if they get by Providence or USC in the opening round.

The Wildcats continue to roll and survive a tough match-up with Duke in the Elite Eight to reach their second straight Final Four.

The west region could be up in the air, but still features two clear favorites in Gonzaga and Arizona. Gonzaga finished the season with only one loss, but has struggled as a high seed in the past, never having reached the Final Four. Whether or not they will be able to advance to a match-up with second-seeded Arizona will be the question.

The Wildcats should reach the Elite Eight with ease with only Florida State as a potential obstacle in the Sweet Sixteen.

Fifth-seeded Notre Dame could also play a factor, as the Irish have made the Elite Eight in the past two seasons and offer a prime upset alert for Gonzaga if the teams meet in the third round.

Arizona ended the season with strong wins over UCLA and Oregon on consecutive nights. If they continue to play high-level defense they should cruise to the Final Four.

The south is loaded and features three of the strongest teams in the nation. North Carolina seems to be strong every year under Coach Roy Williams and 2017 has been no exception. The Tar Heels lost to Duke in the ACC tournament last weekend, but still are 27-8 and one of three favorites to win this region.

Further down we have Kentucky and UCLA. Kentucky finished 29-5 and won the SEC tournament. They were number one in the nation until losing to UCLA at home in December, and never were able to get back to the top of the rankings. Spectacular freshman De’Aaron Fox and guard Malik Monk are the Wildcats biggest assets and will need to be active if they want to advance.

UCLA is just as strong as the other two when they decide to play defense. The Bruins have the most explosive offense in the nation behind Lonzo Ball, who is favored to be a top pick in the NBA Draft this year. If they consistently are able to score and play defense like they did in the second half of the year, they are dangerous and can beat anyone in the country.

The Bruins get their offense going and are able to shoot their way past tough matchups with Kentucky and North Carolina to reach their first Final Four since 2008.

The final region features Kansas and Louisville as the top two seeds. Kansas has been at or near the top of the rankings for the majority of the season, which is why it was a shock to see them lose to TCU last week. Regardless, the Jayhawks are likely the team to come out of the Midwest. They could get a second-round test from Miami or Michigan State, but their biggest tests will not come until later on.

Louisville finished with eight losses, but placed second in the ACC, probably the best conference in college basketball this year. They are strong, but losses to North Carolina, Wake Forest and Duke in the past few weeks have raised questions about their ability.

Also, look out for 11th-seeded Rhode Island to make a run. They get a favorable matchup against Creighton and then a beat-up Oregon team playing without one of their best players. Prime upset alert.

While they will likely be tested late by Iowa State or Louisville, Kansas has the guard play to be able to get by every team in their region and is the strongest team.

Final Four: Villanova over Arizona and UCLA over Kansas

In a matchup for the ages, the UCLA Bruins outlast Villanova in a hard fought battle to earn their 12th NCAA Championship behind efforts from star freshmen Lonzo Ball and TJ Leaf.