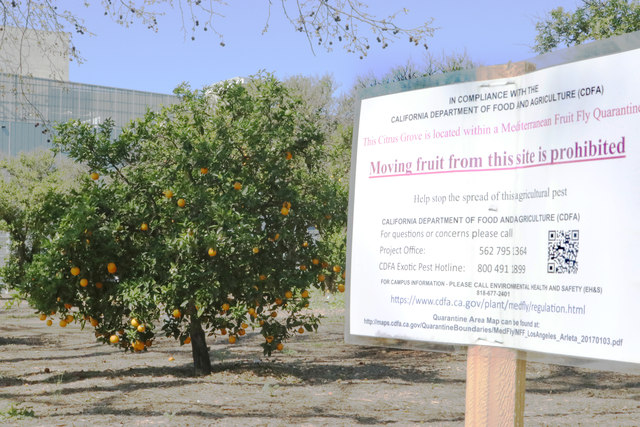 A sign outside of the orange grove at CSUN warns students not to pick fruit from the trees due to a Mediterranean Fruit Fly quarantine on Monday. Photo Credit: Nikolas Samuels/The Sundial

The CSUN Orange Grove has been temporarily quarantined due to a Mediterranean fruit fly infestation, but a hotel is still in the works to replace the Orange Grove Bistro/University Club.

The California Department of Fruit and Agriculture (CDFA) quarantined the Orange Grove after they found high numbers of Mediterranean fruit flies, or Medflies, in the area.

According to CSUN’s Environmental Heath and Safety, the quarantine period is expected to last until July of 2017 and moving fruit from the Orange Grove is prohibited during this time.

The CDFA and the County Agricultural Commissioners have set over 63,000 detection traps in California just for exotic fruit flies, according to the CDFA.

In November of 2015, the California State University Board of Trustees decided to support and approve the concept of building a hotel on campus on the site of the Orange Grove Bistro. The hotel would hold 150 rooms, a restaurant and a conference space according to the proposal.

“One of the goals of the hotel project is to provide the campus community with a modern restaurant to replace the aging OGB (Orange Grove Bistro) and its mounting maintenance demands,” wrote a representative on the hotel specs page.

However, to those worrying about the preservation of the Orange Grove, Susan Dickman, Program and Marketing Manager, said the grove and its preservation are important to the campus.

This idea was further upheld on the site concept page, stating that “CSUN’s orange grove and pond will remain intact. Additionally, the Request for Qualifications (RFQ) states that the development cannot adversely affect the stand of mature London plane trees along Nordhoff Street.”

If anyone has any further questions about the quarantine, they can contact CSUN’s Environmental Health & Safety for more information at (818) 677-2401.