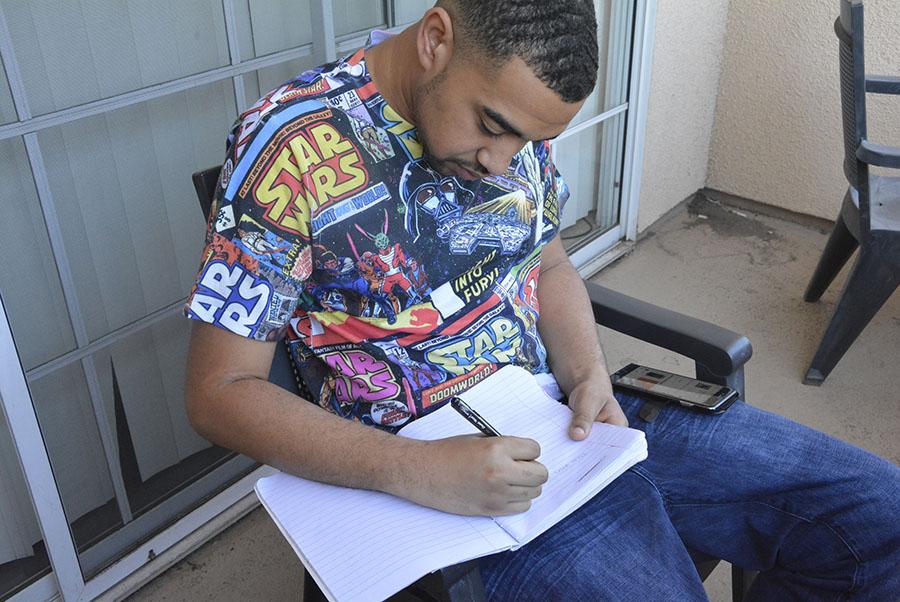 Twenty-year-old Brandon Hudson writing in his composition book on his balcony on Dearborn Street. "When I listen to music I just start writing," Hudson said. "I feel the influence from it. I put together random words but it makes sense to me." Photo Credit: Jessica Herrera

Self-expression comes in various forms and gives people the platform to be who they want to be.

Brandon Hudson, a junior and business management major, said self-expression through poetry has given him the voice he never had. On stage, Hudson is better known as Taylor Martin.

Hudson described his poetry as a way to release bad energy and feelings.

“Sometimes, I think we all hold onto bad energy and we let it manifest on the inside instead of releasing it through a creative outlet,” Hudson said.

At 16-years-old, Hudson began writing about love and teenage angst. For inspiration, he listens to different singers and songwriters he is not accustomed to listening to, such as Bob Dylan, Radiohead, Nirvana, Massive Attack, and A Tribe Called Quest. Music has helped his writing process when it comes to constructing poems.

Hudson said motivation is anything that makes him feel alive. For example, people he encounters serve as inspiration, or something riveting that he sees roaming around the world. In particular, Malcolm X has deeply impacted Hudson’s world views.

“[Malcolm X’s] life and ambitions show you that change is possible in your life, that you can change for the better and have a long-lasting effect on the people around you and for future generations,” Hudson said.

Chance The Rapper’s album “Coloring Book” and Kendrick Lamar’s “To Pimp a Butterfly” are also big influences in Hudson’s work. He said “Coloring Book” inspired the spirituality aspect of his poetry and reminded him to be fearless and never sell himself short. On the other hand, “To Pimp a Butterfly” inspired him to gain self-knowledge and to never take the true things in life for granted.

“Both albums show me how to become a leader for my community by following what I love and give back by inspiring others,” Hudson said.

Hudson has performed his poetry at events throughout the valley, such as at Vocal Artillery, Open Kanvas, Expressions, and at the CSUN Hip Hop Culture Club’s open-mic events.

He originally began watching others perform but later grew confidence to get on stage and share his work. Since attending and performing his work, he has been able to build friendships with the people in the community.

Sharing his art and knowledge with others is something Hudson believes to be rewarding. He said the gratitude, good karma and that being himself is what makes him stand out from others.

“In the words of Tupac, ‘All good things come to those who stay true,'” Hudson said. “Remain humble and appreciative, yet remain confident in yourself. We’re all just roses in different stages of growth.”