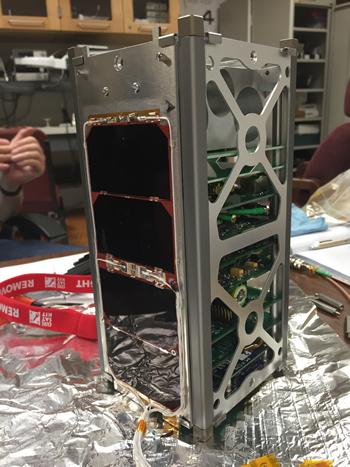 The CSUNSat1 will extend the potential lifetime of power systems, lower spacecraft mass, and lower power requirements. Courtesy of, The CSUNSat1 website.

CSUNSat1, a collaboration between the Jet Propulsion Laboratory (JPL) and CSUN, will be launched into space on March 21 as part of NASA’s CubeSat Launch Initiative (CSLI).

“Ninety percent of the satellite was built from scratch from students under our supervision,” CSUN professor James Flynn, one of the project’s directors, said.

JPL reached out to CSUN about the project to connect students on campus to jobs at JPL, according to Sharlene Katz, another of the project’s directors.

The idea for the specific battery that was built came from discussions between CSUN and JPL, designed to excite engineering students through its practical applications.

The satellite, called a cubesat, will be monitored from Jacaranda Hall. Its purpose, according to the CSUN team’s website, is to “test a low temperature capable, battery/ultra-capacitor power system.”

As part of NASA’s efforts to provide opportunities for smaller institutions, CSUNSat1 will allow the team back in Northridge to receive data from space via Morse code. If the mission is successful, the battery inside the satellite may lengthen the lifetime of power systems for future missions and lower power and mass requirements.

A team of four faculty members and over 70 students helped build the spacecraft, which included Flynn, Katz, Adam Kaplan, and David Schwartz, with NASA’s Jet Propulsion Laboratory building the payload. The satellite will be launched from Cape Canaveral.