Students reveal if politics are more important than their homework 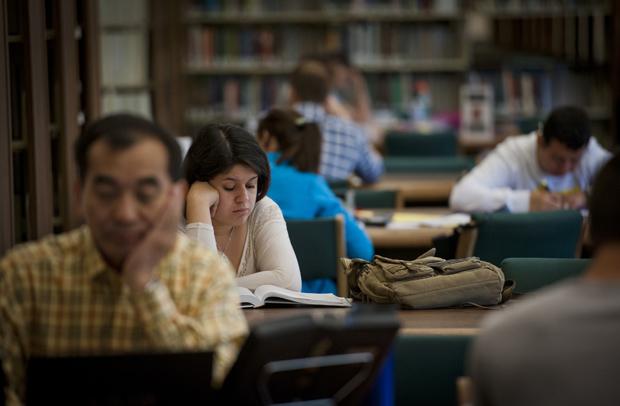 Students at the Oviatt Library. File Photo, The Sundial.

After the 2016 Presidential Election, students find it hard to decide what is more important to them, their homework or current political events.

Chair of Elections for Associated Students, Jaelin Palmer, feels that although school is important, politics are what shape the world.

The 22-year-old missed class this past week to lobby in Sacramento to oppose President Trump’s spending cuts. She said the political climate should be distracting everyone from their schoolwork.

“I spend a considerable amount of time advocating for LGBT rights, women’s rights, immigrant rights, et cetera These all take time away from studying, but how important are my grades if my sister, who is gay, doesn’t have basic human rights?” Palmer said.

Additionally, Palmer said students should try to get involved with what is going on in politics. She stays informed by reading news sites such as The New York Times and The Huffington Post.

Though Palmer has always been interested in politics, the past election peaked her interest even more. With social media, she checks her phone frequently for the newest stories.

“When Trump implemented the Muslim ban, I stopped working on homework to read an article and then turned on the news,” Palmer said. “I basically couldn’t do homework for the next day because I was so distracted with what was going on.”

CSUN Senior Kianna Hendricks said focusing on schoolwork became impossible with the past election. According to the 22-year-old, she missed class after Trump was elected because she felt distraught.

Moreover, Hendricks said homework and her studies are important to her, but sometimes paying attention to things around the world becomes essential.

“During election season it was hard to focus on assignments a lot because I was worried about the political climate. So I was always on Twitter trying to see what was happening,” Hendricks said.

Now that the election is over, Hendricks hasn’t been focused on politics as much. She said she tries not to dwell on the political climate because she feels like she’s constantly disappointed by Trump.

“Now that the election is over, I don’t find myself being distracted by politics as much, it’s more by memes,” Hendricks said.

Professor of political science, Alexandra Cole, said that she implements the past election into her voting and elections class. With students taking an upper division political science class, the majority of them are interested in the topic.

According to Cole, the benefit to teaching the most current election to her students is that they’re learning knowledge in real time. She likes to give her students the opportunity to discuss the election since it is fresh in their minds.

For right now, I think the amount of attention students have paid to current events versus class related materials is about the same as it has always been,” Cole said. “The only times I have felt that students’ attention to their assignments was less than toward current events, were after 9/11 and immediately after the 2016 election. Both were shocks,”

Though some students feel the 2016 election distracted them from their studies, a Twitter poll surveyed 28 students and 70 percent said they were more likely to pay attention to their homework than to politics.