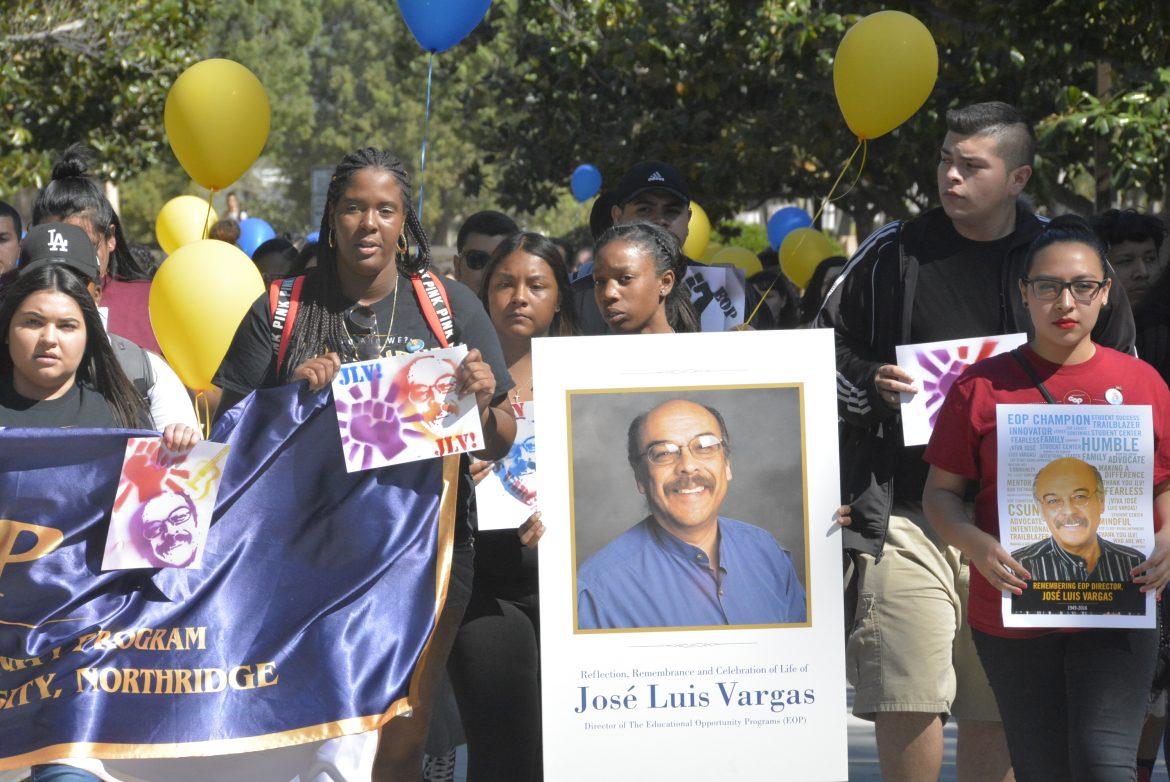 To a majority of EOP students, Vargas was more than just a director. Students showed their appreciation in attendance because of his efforts in academic and personal guidance.

Luis Valadares, a senior liberal studies major, wore a custom-made shirt in honor of Vargas’ mentorship. The shirt has a picture and quote from Vargas that reads, “You represent more than yourself now.”

The purpose of the shirt was to make the CSUN campus aware of who Vargas was.

He referred to Vargas as a really good mentor who helped him throughout college. According to Valadares, the last thing he told him was to take care of his family.

Danielle Medina, a second year communications major, was part of the Residential Bridge in 2015, the last program that Vargas attended. Medina remembers him being very passionate.

“It impacted my life, and gave me these glasses that I can see the world in a different perspective,” Medina said.

Students were given a chance to speak about the impact Vargas had on them.

EOP student, David Contreras, recited a poem thanking Vargas. “Every word he spoke was impactful and he didn’t need to raise his voice,” Contreras said.

“Thank you from the bottom of my heart for being an example and father figure for many students that were lost in the university, but you were there to guide them…may you rest in peace, Jose Luis Vargas, presente,” Contreras said.

“We feel the loss of Jose Luis Vargas as a friend, as a mentor, to some as a father,” Li said. “It’s clear that he’s left a legacy of leadership and continuing education to the EOP program.”

Professor Glenn Omatsu, remembered Vargas’ character and thanked students who took the lead after his passing.

According to Omatsu, he valued honesty and gave back to the community. “Righteousness isn’t something we hear a lot in American society. It means to take action to make things right,” Omatsu said. “After his passing, students and alumni took the lead in making things right for EOP. On behalf of EOP and Jose Luis Vargas, thank you for righteousness.”

“We in EOP cannot believe he is gone, let alone being almost a year and his strength kept us going and we didn’t skip a beat,” Parsa said. She reassured the crowd that Vargas would be proud of the continuing efforts of the EOP faculty and staff, who will continue his legacy.

The walk began at the Chicano/a studies house on Plummer and finished at the EOP commemorative plaque near The Sundial fountain.

There were balloons that represented hundreds of students which he has mentored, encouraged and motivated within the 45 years of his service. After chanting “EOP,” those in attendance released the balloons.