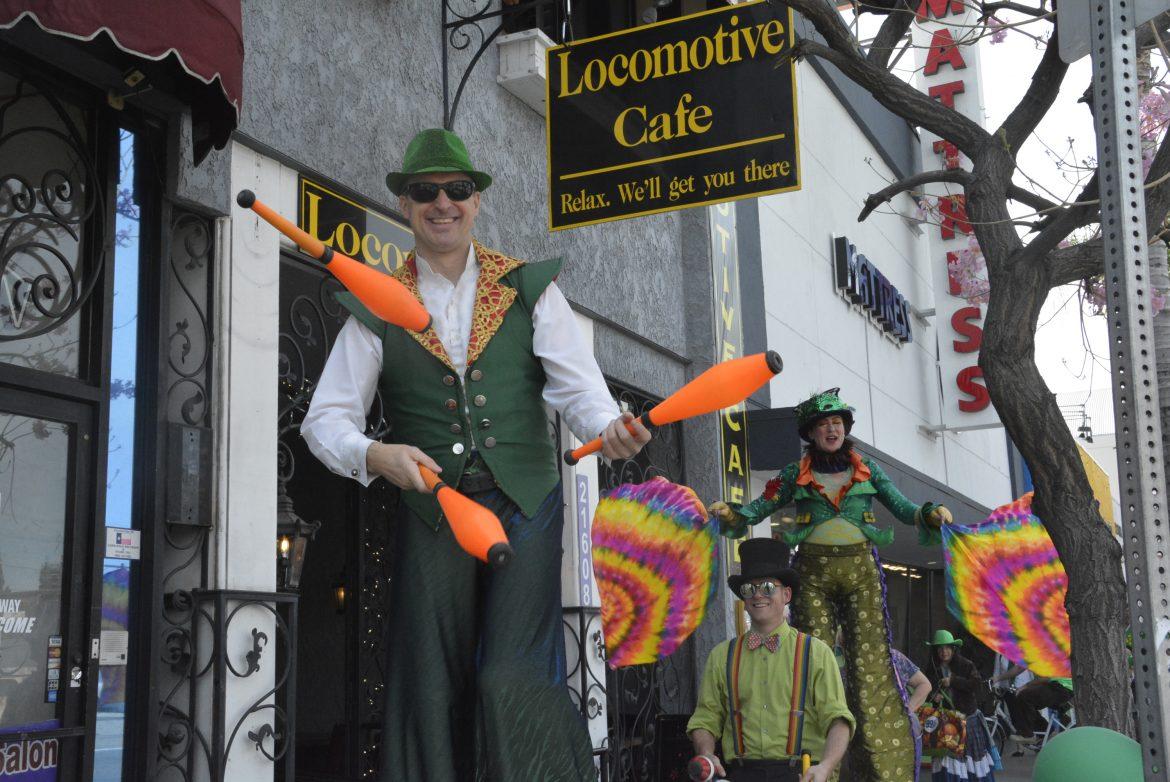 Rob Crites (left), juggler and stilt-walker, performs as he marches with other members in celebration of Irish heritage and St Patrick's Day. Photo credit: Nathalie Ramirez

Canoga Park has gone green with the help of street performers and attendees marching in celebration of St. Patrick’s Day and Irish heritage on Friday.

The march was hosted by the Canoga Park Improvement Association, a nonprofit organization run and funded by the commercial property owners, and began in front of the Madrid Theater and ended at Follow Your Heart in Sherman Way.

Rob Crites, a juggler and stilt walker for 25 years, has been a part of the parade for seven years. Having Irish lineage in his family, Crites admires the culture where everything is a party.

“Being able to do that with this group here feels like a celebration of my own culture mixing with the Irish culture,” Crites said. “If people see, they’ll feel a sense of joy love and acceptance. It’s not just purely Irish culture that participates here, there’s a large Latin American population and we get to party with a traveling mariachi group.”

According to True Thomas, the storyteller of history, legends and lore, the best way to celebrate this holiday is to learn its history.

Saint Patrick was from Britain, blue being the original color of Ireland, not green, and the Irish fighting on Mexico’s side during the Mexican-American war are just a few facts shared to enlighten those that are not familiar with the history, according to Thomas.

Thomas said that there are not many St. Patrick’s Day parades in the Los Angeles area, whereas the west coast has much more density of Irish community.

“The Irish are here just not coalesced, they are the people that helped build Los Angeles,” Thomas said. “There’s no neighborhood that doesn’t have an Irish pub.”

in addition, Thomas acknowledged the mariachi group “Arturo y Los Imperiales,” who performed at this years parade. Thomas said seeing a mariachi band in a St. Patrick’s Day parade is not hard to believe because Spanish and Irish dances are similar, as they come from the same roots.

John Mackey, leprechaun and performer for the past five years, said every group needs its own day, in regards to the importance of celebrating culture.

“People will see the joy on everyone’s face at an Irish pub, even the ones who aren’t drinking are enjoying the ones who are drinking and making fools of themselves,” Mackey said. “We need foolishness. In laughter there is truth.”

Mary K. Paterson, executive director of the Canoga Park Improvement Association, said that they pay for the community, hiring farmers and giving away free things. She said that the people who come to the events are not just performers but also regulars.

Paterson said celebrations like this are about connecting cultures and finding similarities within one another.

“A lot of people feel the separation especially around politics,” Paterson said. “Any event we do, we try to have an educational component where people—even though it’s not their culture—embrace it.”