U.S. downgraded to ‘flawed democracy’ while Norway stays on top 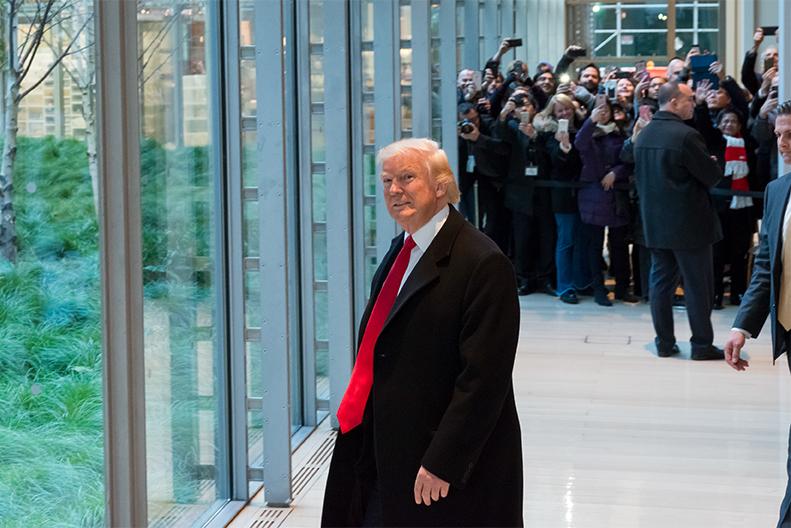 Following his meeting with senior staff from the New York Times, President-elect Trump is seen in the lobby of the New York Times' offices on Eighth Avenue in midtown Manhattan in New York on Tuesday, Nov. 22, 2016. (Albin Lohr-Jones/Sipa USA/TNS)

According to the NBC News article, “Norway Is the ‘World’s Best Democracy’ — We Asked Its People Why,” the United States was downgraded to a “flawed democracy,” with Norway claiming the title as the world’s best democracy for the sixth year in a row.

Norwegian journalist Solveig Svensen said the statement was unavoidable due to decreasing trust in political institutions and officials.

When it comes to this issue, Svensen also mentions that she’s not surprised by the lack of political engagement among youth in the U.S.

“Many young potential voters rightfully feel that their voices are not heard and the candidates don’t represent them,” Svensen said. “Both because of lack of identification with politicians and in the sense that political candidates do not offer credible solutions to problems such as injustice and unemployment.”

When describing politics in Norway, Svensen said that their politicians are more like the average person. They don’t get paid high salaries, which motivates them to enter politics for their ideologies instead of the wages and power.

“Norwegian politicians are generally much more down to Earth than American politicians, at least on the national level,” Svensen said. “Our government ministers and MP’s [members of parliament] often communicate and mingle with their voters, perhaps to a larger degree appearing more as peers and less as a detached political elite.”

Tonje Ettesvoll, a 43-year-old Norwegian citizen living in Los Angeles, said it’s much easier to vote in her home country. According to Ettesvoll, in order to vote in Norway, all one needs is an ID.

Additionally, Ettesvoll said voting in U.S. feels confusing due to the abundance of information on the ballots.

When it comes to Norwegian campaigns, Ettesvoll said citizens consider more than two parties and candidates. She said the candidates in the U.S. seem to personally attack each other. According to Ettesvoll, in Norway, politicians have more room to be human, meaning people know they come with mistakes from their past.

Ettesvoll also said she gets various opinions about American politics from her passengers in the Los Angeles area.

“It gives me an interesting look about how people think here about the political system,” Ettesvoll said. “I’ve had 5 percent Trump supporters and the rest are Democrats.”

Like Svensen, Ettesvoll describes her views of Norwegian politics. She said taxes are higher in Norway due to the money going toward programs like health care, but compared to the high cost of health care in the U.S., it’s just a trade off.

Finally, when it comes to President Trump, Svensen and Ettesvoll said he did an excellent job getting people to vote for him. However, Trump seems to be the epitome of the wealth and power politician that Norwegians tend to avoid.

“What I find the most scary is the president’s wide lack of respect for facts, his own spreading of fake news, hatred towards the critical media and encouragement of xenophobic and misogynist attitudes and policies,” Svensen said.

*This article has been modified to correct a mispelling of Svensen’s name.