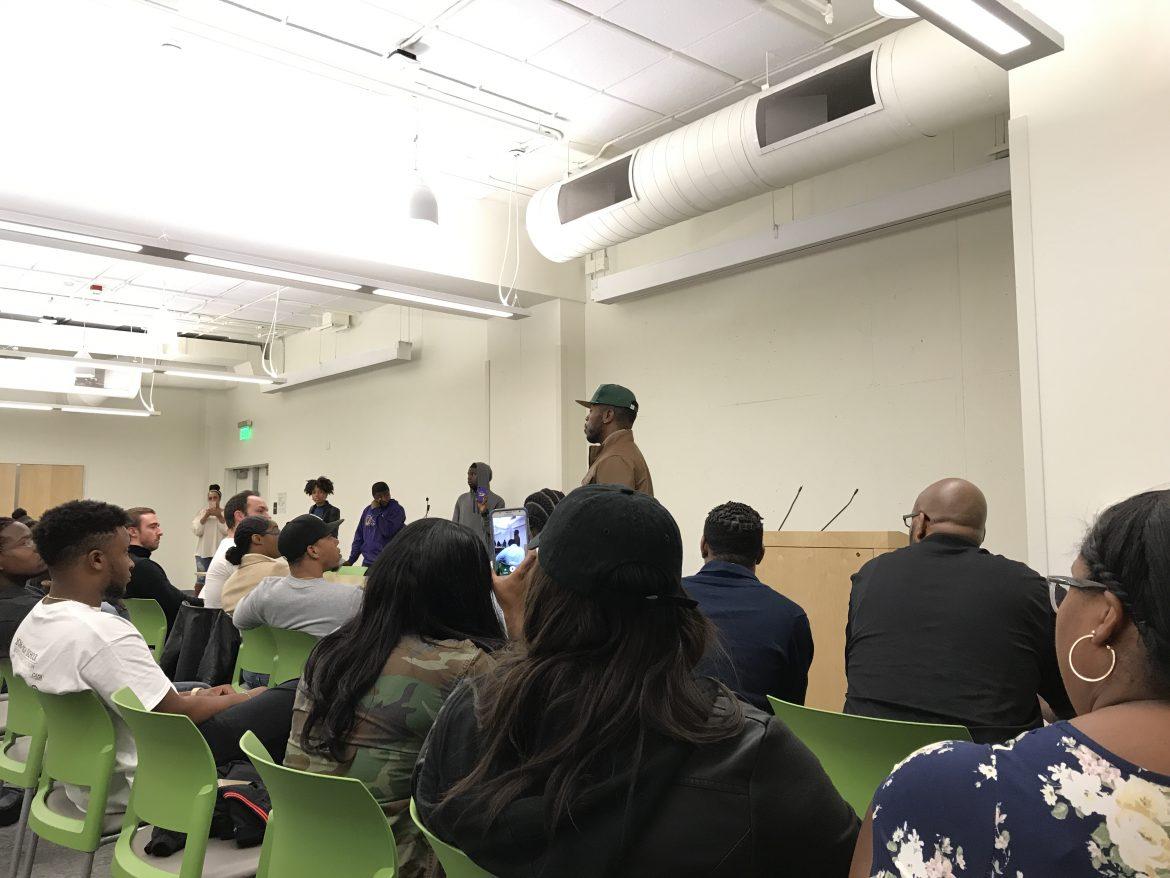 Audience reacts to "Hands Up, Don't Shoot" after first screening, with cast members and director in the front row and organizers of the event standing to field questions. Photo credit: Nathan Hickling

“Hands Up, Don’t Shoot,” a short film following a day in the life of a black American, premiered Monday night at CSUN, which began a discussion on police brutality and the treatment of African-American men.

The screening was followed by comments from the audience about the lives of black Angelenos today, including the difficulties and discrimination that were pertinent to the plot of the film.

Audience members highlighted the often fatal police confrontation that has impacted African-American communities in Los Angeles such as Compton and Inglewood, as well as discussing the roles that black women play in perpetuating difficulties black men face today.

“When people are close to you, who love you, don’t believe in you, it kinda sends you in a psychotic cycle,” JayTee Thompson, the director of the film said.

Thompson spoke about his experiences with police brutality as he described the inspiration for the film, also touching upon topics such as the responsibility African-American celebrities who grew up in neighborhoods lethal to black men have to the communities they come from.

“The message I really want to bring across in this project is understanding,” Thompson said.

The film screening was followed by a Q&A with Thompson and several of the actors in the film, including CSUN alumni Kendon Tillis, who played the main character.

“It [police discrimination] really can follow you everywhere you go,” Tillis said. “My first year in college here, I was coming out of a parking lot and the police pulled me over. They had no reason.”

Tillis said he thought he would not face as much discrimination from the police in Northridge, but found it nonetheless.

Another audience member and former police officer, Brenda Williams, said forming relationships with community members was how she was able to live in South L.A. in a high-crime neighborhood.

“You all can make the difference, but you gotta start somewhere,” Williams said. “Get to know your community officers, have a relationship with the people on the streets, with the people in blue.”

One thing audience members agreed upon was that discrimination does not disappear with wealth, status or education.

“Being the mother of a black man, this [movie] just speaks to my heart,” an audience member named Jackie said during the discussion. “We as women have to support our men because they get badgered enough out there in the world. They don’t need to be beaten down like that; they can go much further when they know they have that support.”