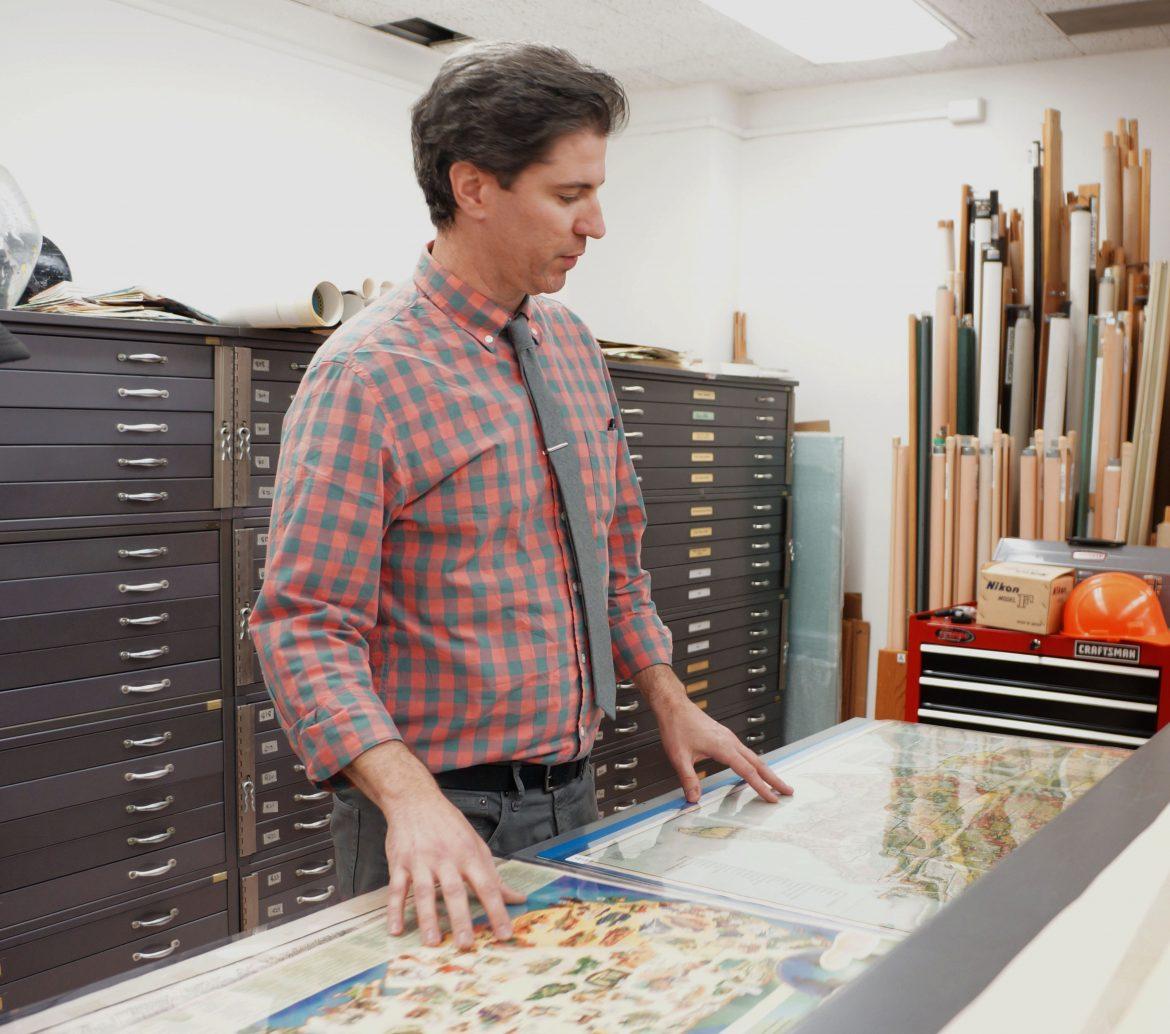 Chris Salvano is the map curator and librarian at the map library in Sierra Hall 165 and has been at CSUN for two years. He is showing a student the variety of the maps archived in this room. Photo credit: Katarina Karapetyan

Geography students are fighting to keep their department’s map library collection from being split between Sierra Hall 171 and the Garden Level of the Oviatt Library, to make room for criminology offices.

The planned move is the second action that students and faculty within the department have called uncalled for and unnecessary. The first was the renovation of the reading room and addition of a conference room in SH 171 about a year and a half ago.

Students under the Keep CSUN Map Library Campaign created a petition to gather support from the student body to keep the collection of over 400,000 maps together. However, some students are afraid of publicly supporting the campaign because of perceived repercussions from Stella Theodoulou, the dean of the college of social and behavioral sciences. Theodoulou was also the person to go through with the renovation of the reading room.

“As students, the people who use this resource the most, we don’t feel consulted,” said a student going by the name of Kat. “We found out about this by chance and if that hadn’t had happened, we wouldn’t have known that we were possibly losing a precious resource.”

Kat said that the map library was one of the major talking points about the department when she was looking at schools to attend. During her academic career at CSUN, nearly every geography class she has taken included the map library in some form, either through an assignment or a tour.

With roughly half of the map collection potentially moving to the Garden Level of the Oviatt, students felt the need to speak out to ensure the maps are protected and stored together.

If the move happens, students and faculty would have a harder time accessing maps, due to spending time walking to the Oviatt and not being allowed to take documents from the Oviatt back to the classroom, according to the student group that created the petition.

According to Kat, the petition has gained over 150 signatures from students across different majors. Other majors that use the library housed in the geography department include anthropology, geology, urban studies, history, Chicano studies and Africana studies.

One student, Jeffrey, is worried that once the collection is moved, pieces will be gone forever.

“To me it’s a collection of historic artifacts, visual artifacts, showing the progression of humans as they populated not just the Southern California area but the world in general,” he said. “And it’s one of a kind. Once this goes away it will never come back.”

CSUN’s geography department is renowned because it has this library, according to Jeffrey.

According to Robert Gohstand, emeritus professor of geography and project director of the Old China Hands Archive, the library holds its large collection due to the Federal Depository Library Program, which is a contract agreement with the federal government stating that the library would receive a copy of each map the government publishes.

Under the agreement, the maps from the government must be preserved, cannot be copied or digitized, and both the university and public populations must have access to the collection.

Moving half of the library’s collection might violate this agreement.

“The thing that might make [the move] illegal, is that we need to check what are the requirements for access, for staffing, for the ability of the public to reach a particular map,” Gohstand said. As far as staffing goes, there would not be any new employees hired to oversee the portion of the collection that would reside in the Oviatt, according to Gohstand.

The map library’s archives make up a collection that is, according to Gohstand, “perhaps the finest in the western United States, west of the Mississippi.” He emphasized that a collection of this scale needs to be stored together, because moving between locations would cause problems for students.

In addition, Gohstand said there would be a lot of time and money spent moving all maps to the Oviatt when the criminology offices can be located there instead, since the Garden Level space is already a series of offices.

Gohstand, along with other emeritus professors, will meet with with provost Yi Li to further discuss the situation of the map library on March 30.