Letter to the editor: why buses should be publicly owned and specialized for university students 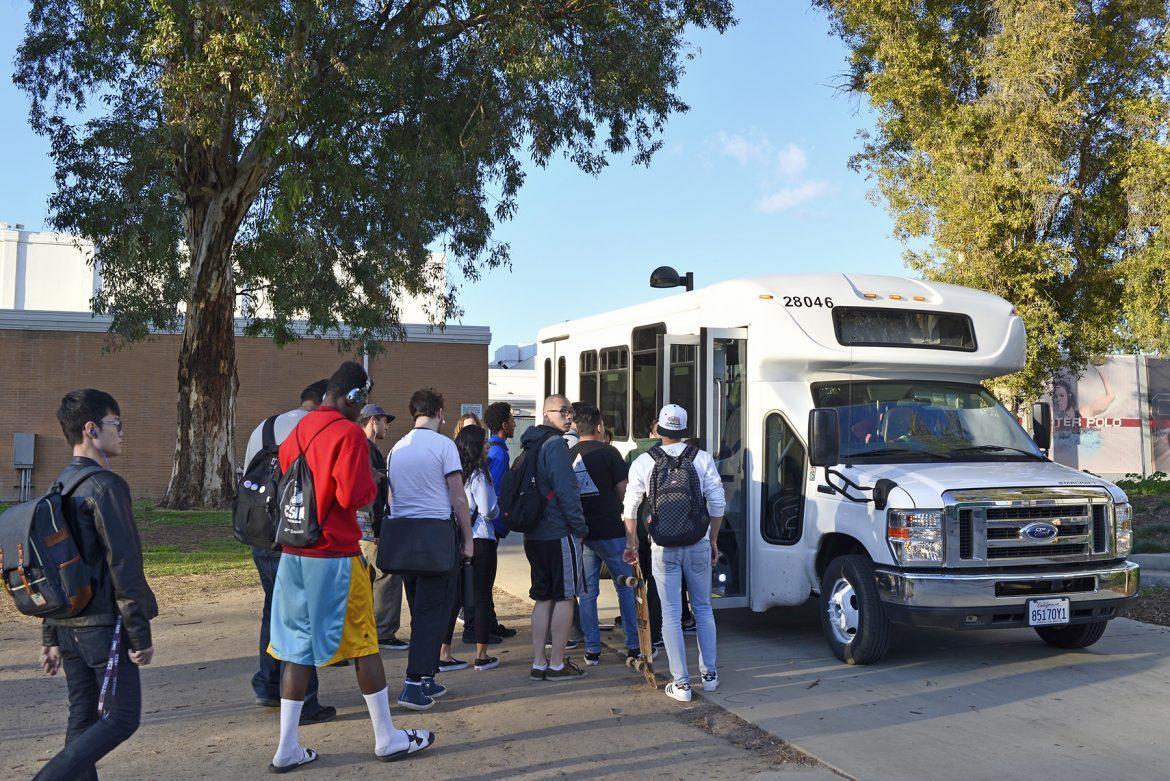 Students board the privately owned bus service that transports them from CSUN's main campus to the dorms. Photo credit: Marja Ziemer

I have ridden public transit buses for six years in Los Angeles and I am a regular rider of the dorm to school bus tram. As an urban planning major and as someone who is registered with the disability office, I am impressed with its frequent service, but have concerns.

Currently, the dorm trams, along with the Metrolink shuttle, are privately contracted out by the university to Keolis, a privately owned French firm with a global reach. Personally, I feel the university should run these services entirely, as opposed to being privately contracted.
Since CSUN is a public university, its vehicles are forced to be compliant with the Americans with Disabilities Act (ADA). As a result, they are well maintained but the same level of maintenance is not required for privately purchased and owned vehicles, like the ones currently used for these services.

On my tram route to the dorms, I noticed the buses by Keolis were in poor shape. I even questioned if the wheelchair lift worked.

Brian Sanchez, a care worker for a disabled student, said two buses have their handicap ramp broken, which is in direct violation of the ADA. As a result, he only uses the bus on exceptionally hot, cold, and/or rainy days because of the health risks that involve being exposed for too long.

In addition, Keolis is currently under fire in Massachusetts for poor service complaints and fine dodging that led to the Massachusetts Bay Transportation Authority contract to be terminated in January 2017. Staff, driver and vehicle shortages were noted as well. I do not see this happening if the buses are publicly owned due to ADA compliance and regular service intervals being mandatorily enforced.

Another problem with the buses being privately owned, is that they are generalized to fit as many services as possible, and not specialized to CSUN. From my experience with riding the tram on campus for two semesters, I’ve noticed many times that the buses are packed like sardines and overloaded with passengers. There are riders sitting or standing on the steps because every other space on the bus is taken. Many passengers have to temporarily get off the bus and then back on so that a rider or two in the back of the bus can get off.

Furthermore, there is music that’s played through the radio on the dorm trams which is problematic. The transit buses I rode in Los Angeles for six years have PA announcement systems and readouts for making people aware of upcoming stops along with stop cords and/or buttons to signal the driver to stop, and therefore you are banned from using radios and playing music unless you have headphones on.

Most public transit riders take these features and measures for granted, but for those who are blind or deaf, the PA announcement system and readouts may be the only way they know they are at their stop.

Having stop cords and/or buttons also allows all riders of all abilities to notify the driver to stop without speaking, which is especially critical if you are deaf, and/or if the bus is fully loaded.

If the buses were publicly owned and specialized for CSUN, having such features will be integral to disability access as much as having a wheelchair ramp. I know this is a tough time to fund such a move, but the long-term goal and outcome of having one of the greenest and most efficient university bus fleets in the nation, is something that everyone here at CSUN should be proud and honored to work on all the way through.