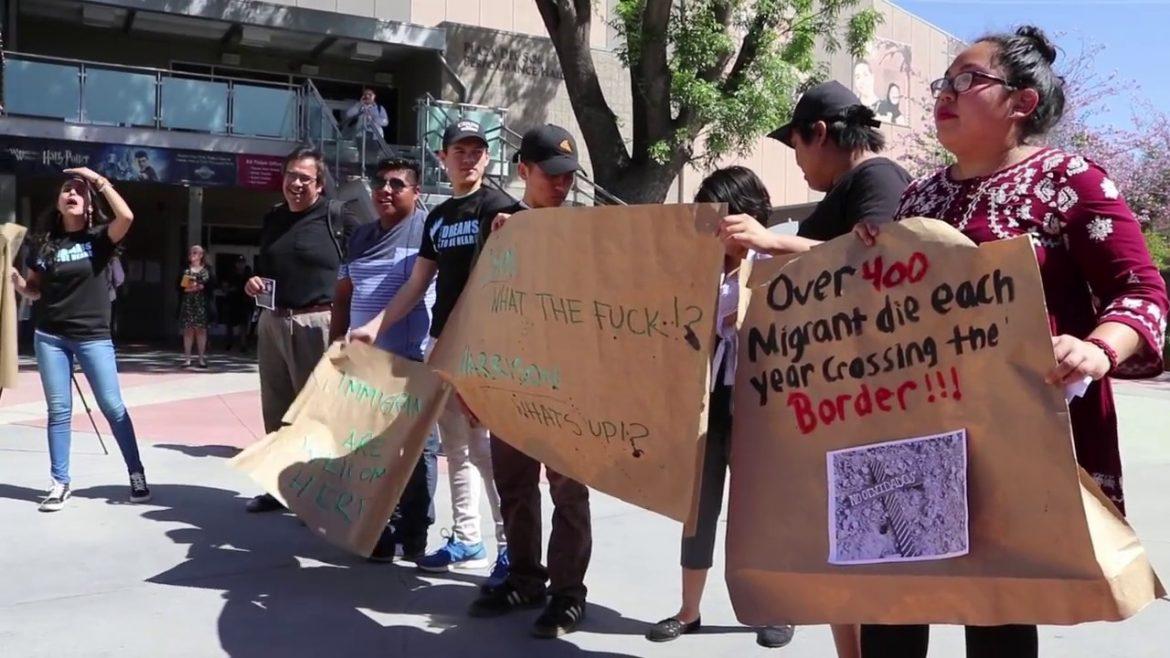 Students protested Customs and Border Protection (CBP) while they were recruiting during the career fair at the Plaza Del Sol on campus today. Many felt uneasy about the recruitment, considering the amount of undocumented students enrolled at CSUN.

The protesters passed out flyers which read: “Stop recruiting CSUN students to deport CSUN students” in bold, followed by the fine print which called for the CBP to be removed from the federal job fair for students with disabilities on April 5 and any future events on campus.

Shelley Ruelas-Bischoff, CSUN’s Associate Vice President of Student Life, said that the student protesters came together to express their support and concern for their peers.

“We absolutely support our students’ right to exercise their voice and their freedom of expression,” said Ruelas-Bischoff.

President Dianne F. Harrison wrote an email on Monday warning students that the CBP and other municipal police departments would be present on campus during both the non-profit and government career fair and the federal job fair for students with disabilities.

The group of protesting students also started a petition on change.org in opposition to CBP’s presence. According to the petition, the group believes that Harrison “openly contradicted her statement of support by informing the Campus Community of the incoming presence of U.S. Custom and Border Protection recruiters on our campus on March 29th and April 5th.”

Harrison wrote in the email that these agencies would only be on campus to discuss career opportunities with students. Due to CSUN being a public institution, the university refuses to restrict “who can participate in career fairs or other educational activities unless the entity is in violation of CSU or university policy.”

According to Dwayne Cantrell, CSUN Associate Vice President for Student Access and Support Services, the career fair has been going on for about 35 years and is typically planned a year in advance.

The career fairs are open to everyone. They are meant for CSUN students and alumni, though they will not turn away a non-student if they are a guest. However, the main focus of the event is more jobs for students, according to Cantrell.

“We want to make sure that all of our students, that the whole breadth of our campus, are exposed to opportunities and jobs and work,” said Cantrell.

Any non-profit or government agency can apply to present at the career fair. All agencies in attendance must pay a fee and meet specific criteria. There is no selection process, said Cantrell.

He also said the fees paid by these agencies bring more funding for programs for CSUN students.

With CSUN being such a culturally diverse institution, these actions lead some to question the moral and values of the school in relation to helping undocumented students succeed.

*Nikolas Samuels and Nicole Wong also contributed to this story.