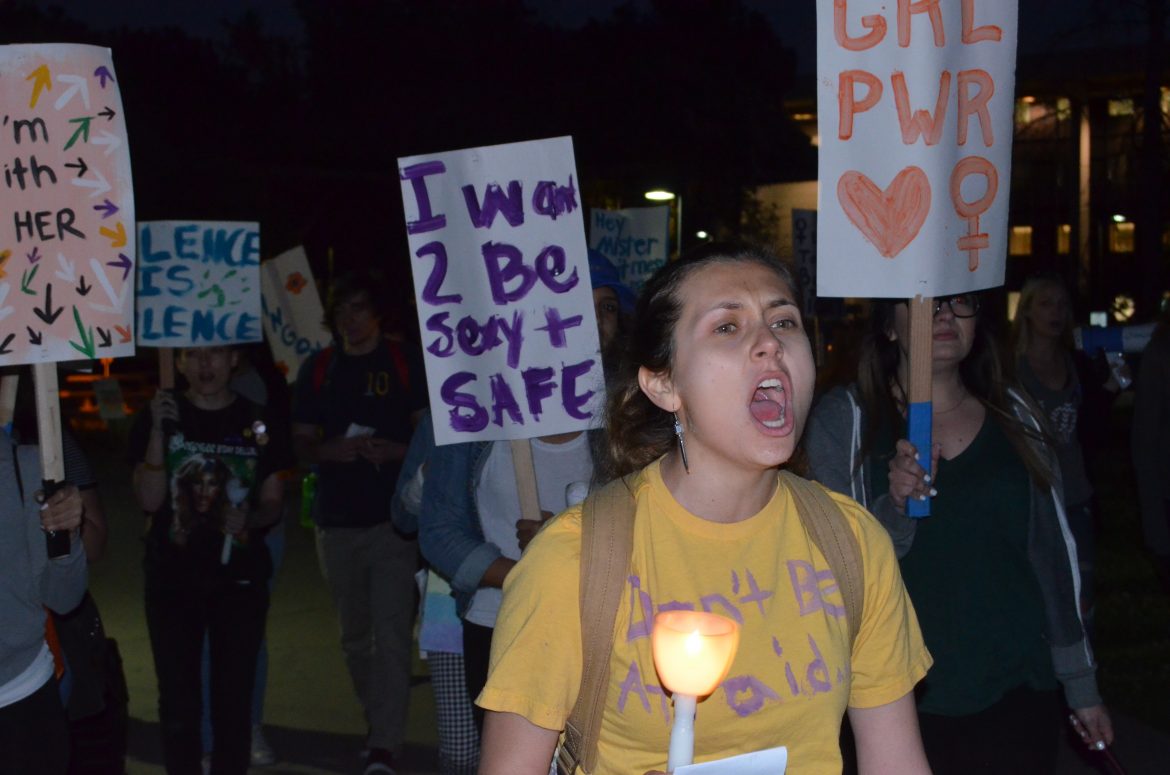 Raising signs and candles expressing solidarity, members of the CSUN community rally through campus on Thursday 30th in a march to end violence against women. Photo credit: Brian Andrade

The Women’s Research and Resource Center hosted their 14th annual “Take Back the Night” rally and march to educate participants on several aspects of sexual assault.

“Take Back the Night” is held every March during Women’s History Month to raise awareness on sexual assault and more.

According to Shira Brown, a CSUN professor and Women’s Research and Resource director, “Take Back the Night” is a national organization that occurs across college campuses worldwide and has been held at CSUN for 14 years.

“It creates discourse around sexual violence and rape,” Brown said. “We try to collaborate with many on campus and off campus programs to allow students access to as many resources as possible.”

Students and faculty gathered at Plaza del Sol where they watched live performances, spoken word and monologue. Shortly after, attendants lit candles and marched to the Women’s Research and Resource Center, where they shared their personal stories.

“The candlelight march helps shed light on those people who don’t have a voice and may have died at the hands of sexual assault,” Brown said. “These candles represent those people.”

A constant theme throughout the event was that many people had not associated their specific case to sexual assault because they had not been penetrated.

“Sexual assault is any unwanted advance of any kind,” Brown said. “Penetration is just one form of sexual assault. It isn’t the defining thing that makes it verifiably an assault.”

The event creates a healing space for women who may have experienced sexual assault, Brown said.

“This kind of event can empower people and help them find comfort in numbers,” Brown said. “Sometimes seeing someone else’s bravery allows us with our own. It allows students to think about their own stories and how they can heal from it.”

Brown said she was happy with the number of people that attended but that there is always room for improvement.

“It was a very successful event but I would love to see more male students show their support next year,” Brown said. “Men need to be a part of the solution.”

Jasmine Yang, a volunteer at “Take Back the Night,” said that sexual harassment is an issue that many students like her may face while they commute.

“When I take the bus home from school, men will harass me and make me feel uncomfortable to be alone at night time,” Yang said. “Situations like these help me understand what ‘take back the night’ means. It’s really about creating a sense of empowerment to be able to feel comfortable.”

Yang said that the topic of sexual assault is often viewed as taboo and thus, plans on talking to people about what she learned at the rally.

“I’m going to bring it up to other students and my family members,” Yang said. “It’s not something that comes up in everyday conversations which is something that should change.”

Haley Jo, another volunteer at “Take Back the Night,” said that the march allowed her to feel empowered.

“During the march, there were two guys that sat down in the middle of our path and in a way, they resembled the obstacles that a lot of us have to overcome,” Jo said.

According to Jo, recent sexual assault cases on campus have made students more fearful.

“I take night classes and I’ll often have to wait on campus for a friend or a matador patrol officer to walk me home,” Jo said. “Especially with the recent sexual assault issues that have been emailed to students. It scares me to walk alone at night which is why this event is relevant.”